A proper Lincolnshire mist had been thoughtfully laid on by Chris and Pete for my first biking adventure in the Wolds, it was so comprehensive in fact that one of Europe's most spectacular suspension bridges...the one that spans the Humber estuary was in fact all but invisible! Now THAT's misty! Ok boys I get the picture; Lincolnshire mist is something else! I should point out we went back over it during the afternoon, and it is a stunning bridge!
We met up with a couple of Greencat's Ducati riding friends, the poor lad didn't want to be the only one to mount an Italian that day....bless. 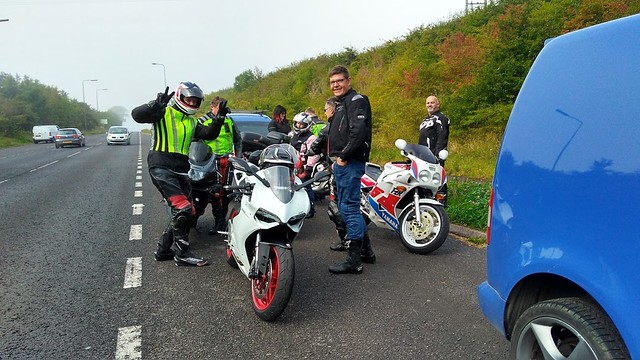 Meeting up with the Ducati boys

Once GC and Pete had put the mist away we got down to enjoying a dam  good days riding, the nine of us hanging together well at a decent, enjoyable pace. I had always considered the area to be a little featureless but GC opened my eyes to some excellent roads that twisted through some iconic countryside. The place is steeped in the history of the RAF and really will have to return to have another dig into this side of the areas appeal. First proper halt (we can't count Big Nige's hurried dive into a lay-by for a pee) was at the charming Folly Lake. Nick on the EXUP did have to dodge a rat from the Lake as we picked our way gingerly down the lengthy and bumpy drive, but don't worry Roland was fine. The Lakeside cafe is in an idyllic spot and offered a bewildering array of cakes and pastries, I reckon they must of had Mary Berry trussed up down in the cellar and they occasionally drag her to bake for them! They were superb and it was great to chill out at the lakeside, now bathed in a gentle, warming sunshine. 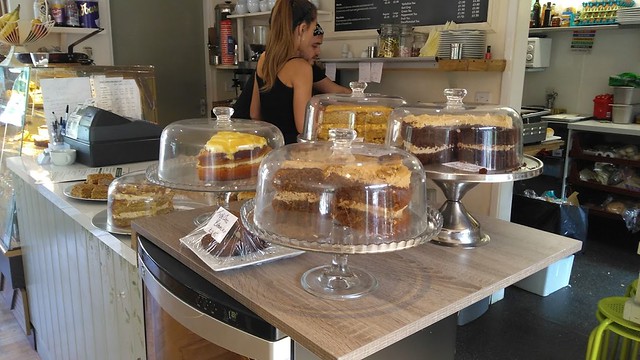 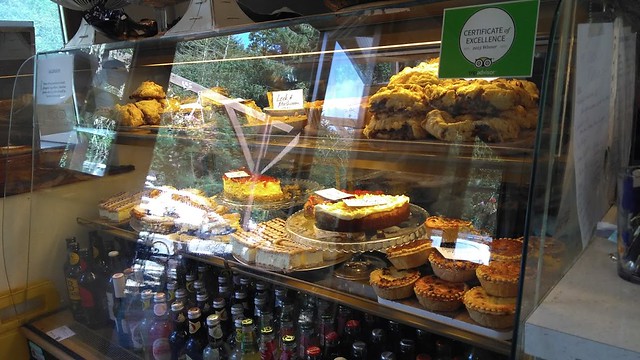 I am sure they have Mary Berry keep hostage somewhere... 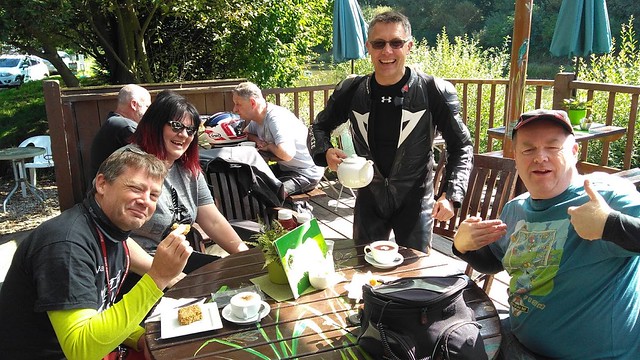 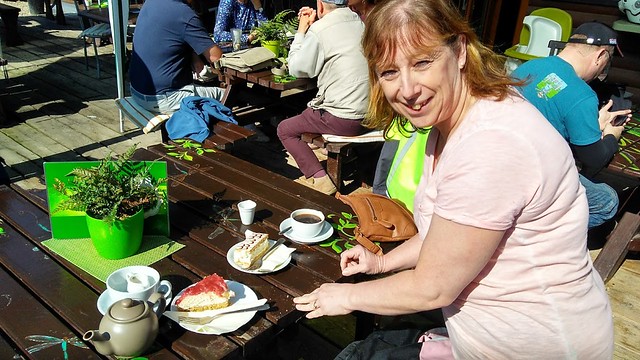 They were certainly being enjoyed by the crew 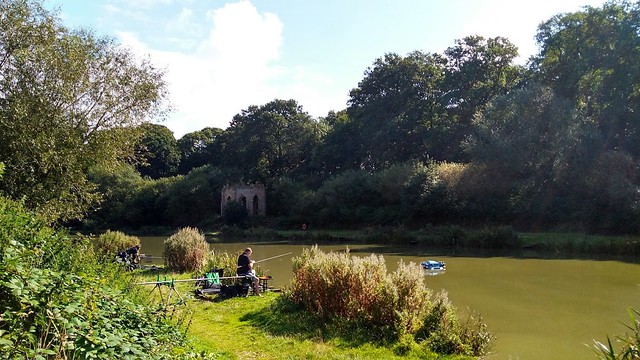 Folly Lake is a beautiful location

We picked our way up the east coast and I discover the delights of Scarborough  for the first time. Despite the heavy traffic it was great to see the sea, and one the lads on a Ducati even had a chat with  car owner in the traffic who used to own a similar model! So we had made our way in Yorkshire, so this was the fiendish plan to prove there are hills in Lincolnshire...take us to a different county! 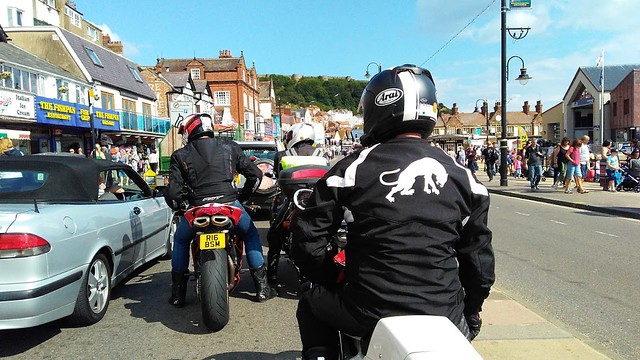 Talking Ducatis in the traffic as we passed through Scarborough...I believe the fair is very good....are you going?

Lunch stop was also really excellent at the spectacularly located Raven Hotel with a view of what are England's steepest coastal cliffs. I will quote their website here at its sums the place pretty much perfectly:

"Raven Hall Country House Hotel in Ravenscar is dramatically situated 600 feet above sea level, overlooking Robin Hood's Bay in the North York Moors National Park and midway between Whitby and Scarborough. Raven Hall is in an inspirational and historical setting and a perfect choice for your next trip to North Yorkshire."

It is also a wedding venue and so we treated to the slightly surreal sight  of a group of bikers mingling with a wedding party. They did give us our own room though, complete with a  brilliant view of the bay. 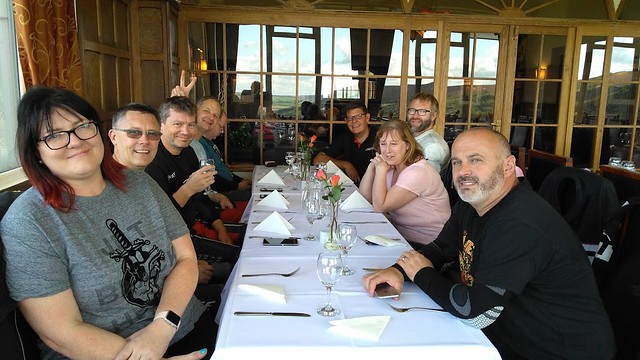 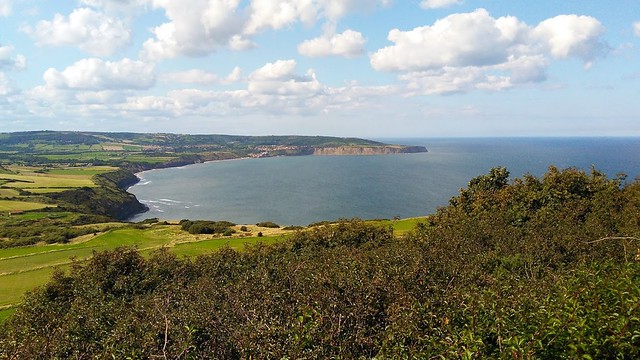 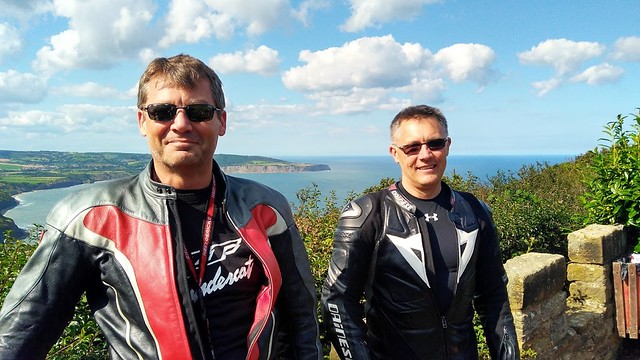 The ride in the afternoon was much in the same vein of the morning, typical undulating roads, but was interesting to note how my recently refurbished Thundercat was coping. On the Oxon loop, riding solo I had been very impressed with the Hagon rear spring/damper unit...the bike had a calm composed feel through corners. However here on ToL I was 2 up, with the ever excellent MrsR on the back of the bike. I didn't get a chance to adjust the suspension and I think I needed to. I one point Weasley reckoned I was airborne! I also had less than the ideal tyre pressure in the back, around 35psi when I checked it back at base so I gave it a little boost to 42psi before the long ride home. (Thanks to Nige for the C02 canister btw)
Final halt for the day was in the sleepy village of Kirmington to have quiet drink in the local pub...The Marrow Bone& Cleaver. Now what you might not realise is that Kirmington is in fact the centre of the universe. Well it is according to a certain Guy Martin, who hails from this village and recently bought the local pub and has sunk a load of cash into doing it up. On the day we rocked up it was far from quiet, as The Wall of Death was in town. 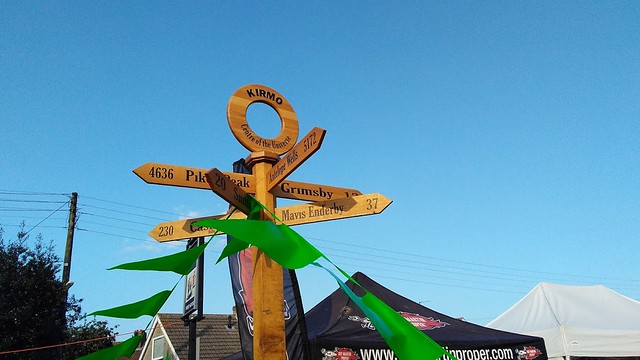 The centre of the universe...its official! 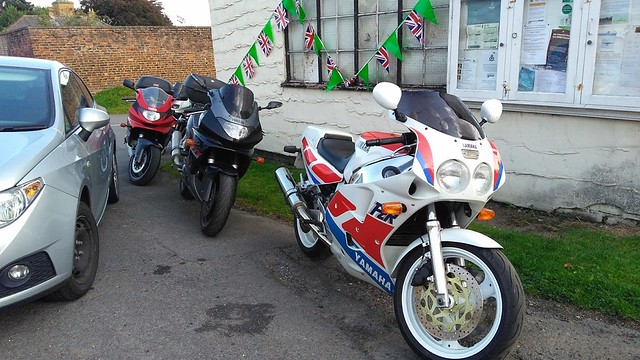 Perhaps if a certain local racer had used nice, reliable Yamahas at the IoM this year, he would of had a better TT...just sayin'!

The place was packed and there were bikes everywhere. I have to say he has done a great job on the pub, it is decorated with images of WW2 aircraft such as the Avro Lancaster. Guy himself is named after Guy Gibson VC who led 617 squadron on its most famous Dams raid in May 1943. 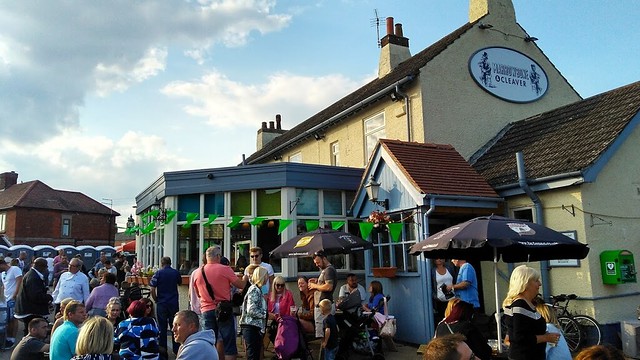 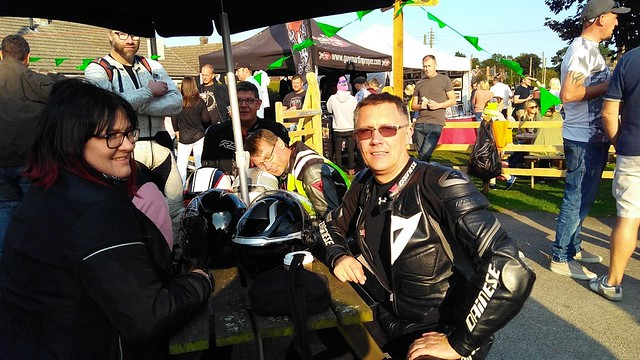 Ellie and GC soak up the atmosphere whilst Weasley is clearly still buzzing form the days riding...

From here we headed back to Woodhall Spa and for one section of the trip we attacked the superb Caistor High Street. Not, as I first thought, a village high street, but rather a superb piece of road that twists and turns across Lincolnshire. It was my favourite section of the whole day and really enjoyed hustling the Thundercat along here at a decent clip. mostly with Weasley tucked in behind me. Awesome and a real buzz. A great way to end a super day on the roads of the area. We all got back in one piece and that always important on a ride out. Chris and Pete had led and tail-ended the run perfectly all day...cheers .
Once freshened up we sat outside the pub under the expansive open skies of Lincolnshire...the perfect moment for a Spitfire flypast...the Battle of Britain Memorial flight reside only few miles away....but no. I was disappointed. The Oxon Loop had a flypast, a Mustang, but ToL. Must try harder GC!! 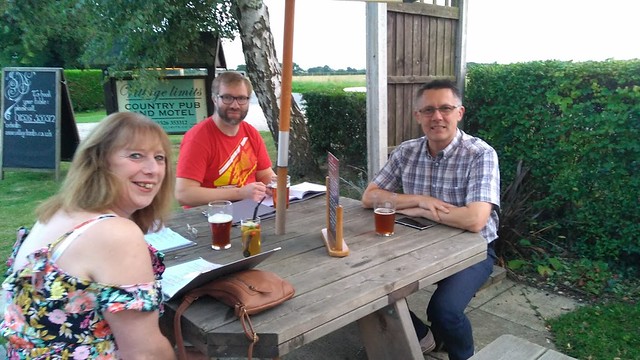 Outside The Village Limits...waiting for the flypast... 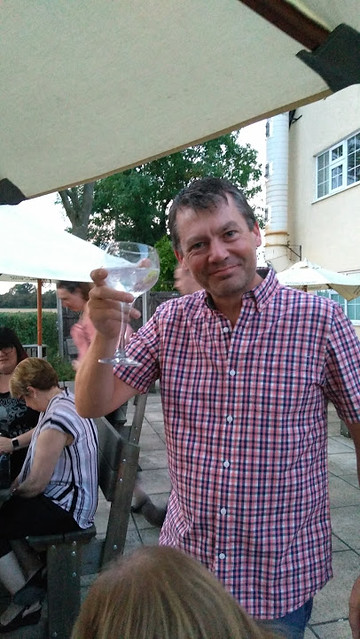 Weasley, obviously that Caistor road livened him up a bit! 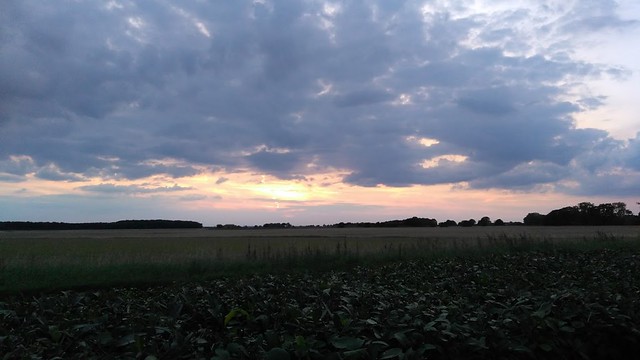 Not so much as one measley Spitfire 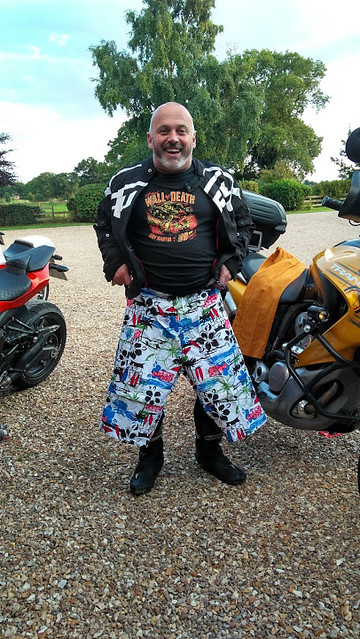 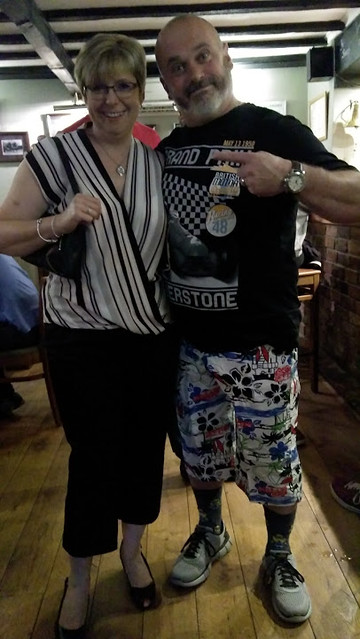 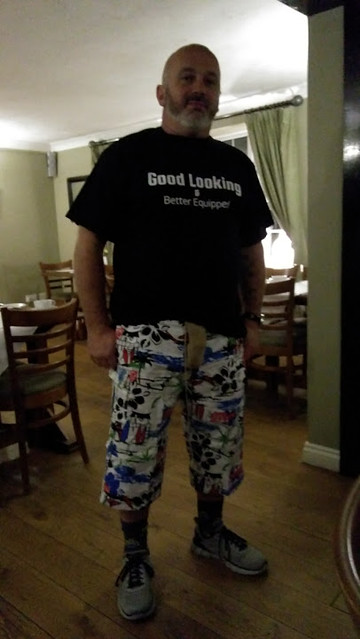 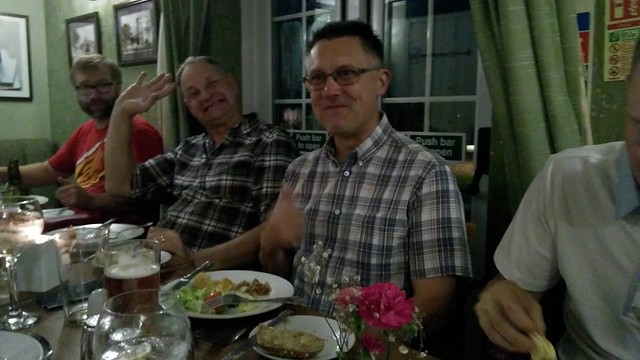 Chris and Pete hosted another superb event...well done lads and thanks muchly!

Another excellent night was enjoyed by all in the pub. Ellie's elder daughter, her chap and one of her friend's also joined us for the meal, as did one of the Ducati boys Nathan. So we had a big crowd for the evening. The beer flowed and the banter was hilarious. Chris even gave a speech!
The next morning I followed Nige on his Transalp to pick up a good route home and rolled back onto my drive in Worcestershire having done over 570 miles for the weekend. As per usual my Thundercat, now 19 years old, never missed beat. They really are a great bike when looked after well.
Well we had had enjoyed a fantastic weekend and our introduction to the  area had been a really positive one. In the words of the Terminator...'I'll be back!"

Brilliant Tony, but I have to add - you missed the Spitfires Friday night because you were inspecting the inside of the pub!

I'll be there next year as this year's was the 1st I'd missed for many a-year.

As you say, it's a part of Lincolnshire heritage but have we ever visited Coningsby to see some aircraft up close on these ride out's?

@ellie wrote:Brilliant Tony, but I have to add - you missed the Spitfires Friday night because you were inspecting the inside of the pub!

I'll be there next year as this year's was the 1st I'd missed for many a-year.

As you say, it's a part of Lincolnshire heritage but have we ever visited Coningsby to see some aircraft up close on these ride out's?

I visited the BBMF in 1997 whilst doing some research for something I was working on. This was long before the visitor centre, I got yo tour the hangar and chat to the engineers who worked on the aircraft. It was an amazing day. I definitely need to come back and explore properly

Great write up. I must try attend next year.

@yamahamad wrote:Great write up. I must try attend next year.

It is well worth going if you can, I plan to rock up again next year