Hi all,
Thought I'd start a write up on the new project bike. Hope you'll find something of interest over the course of the build. Also, by starting a thread, it'll hopefully make me keep my eye on the ball. The bike'll get built as and when funds allow and between paying jobs and building the post classic race bike. So pull up a chair and put the kettle on.This could take a while.
The basic idea is to build a retro 80's style bike so -
Steel frame
Update the brakes and suspension but keep it twin shock and rwu forks
Sit up and beg style, mainly 'cause it looks cool but also my back,elbows and wrists are knackered and I can't use low bars.
Bike is also going to be used as a rolling advert for the business, so there will be lots of fabrication, fibreglass and other stuff to showcase what I do.

Progress so far, the engine is of course a Thundercat, bought originally for an F2 sidecar which didn't materialise. This is being slotted into a '79 Suzuki GS750 frame picked up for $35 (about 18 quid) off Trade Me and I've just this weekend got a pair of wheels from a 600 Bandit.
The engine fits into the frame nicely but I think the top tubes will foul the carbs (I'm going to be using K&N's rather than airbox) so there will be a bit of surgery required there. I've roughly lined everything up by eye, and the chain run looks as though it clears everything. I can move the gearbox sprocket in a bit and the back sprocket out if I need to.
Next step is to make up a back wheel spindle and spacers then source radiator, fan and carbs so I can get the engine positioned properly.
New Zealand is a total backwater for bike building (although Hot Rods are very popular) and is completely obsessed by red tape. Even finding info on what is required for frame mods is a nightmare and everything as to be certified so wading my way through the paperwork could be a nightmare.
Anyway, that's about where we're up to at this stage. I'll try and post a few pictures as things happen and I'd welcome thoughts/ideas off anyone as well.

I'll just get a set of bespoke Thundercat ones off UK e-bay. Should be able to get 'em for less than half that. This bike is on a SERIOUS budget

As befits the fiscally challenged nature of the project, looks like I 've got myself a set of forks off a CX 500

They should do for the time being and will at least give me a complete rolling chassis. Once the thing is built I may look at uprating but I'll see how these go. Depends how much aggro I'll have mating up GS750 frame with CX500 forks/yoke and Bandit front wheel 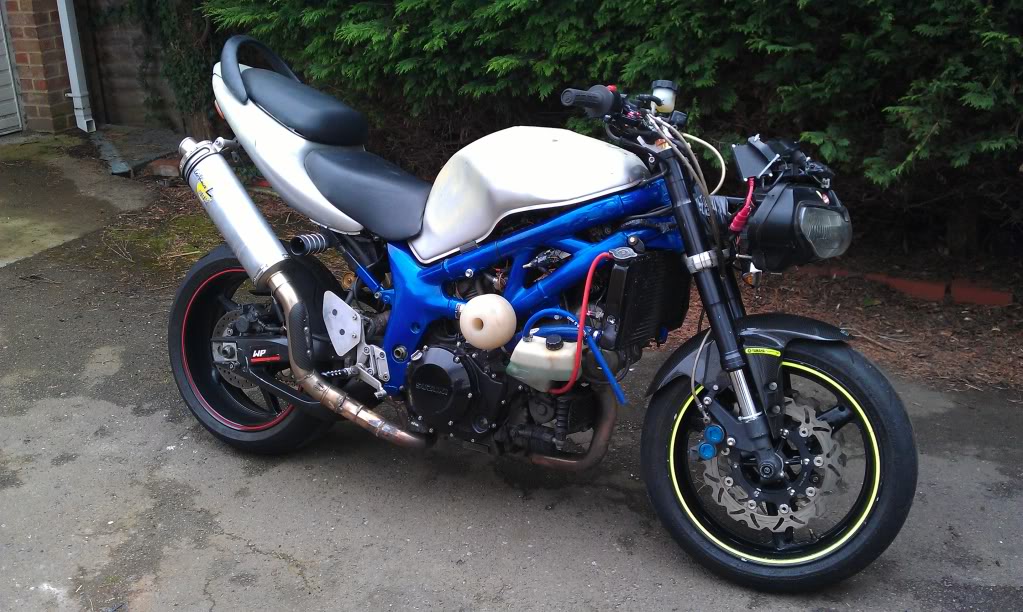 It's an SV650 frame and rear sub frame / fairings, TL1000 engine, R1 Front end and swing arm, hydraulic clutch and HID headlights. It's got some engine management issues but I'll put it in dealership mode and find out what the problems are this weekend (and it sounds like thunder

It was built as a stunt bike and has some interesting things on it like a switch to override the fan and turn it on sooner, the airbox sensor is on the outside to trick it into thinking it's cooler, this has a switch on, not sure why and the biggest crash mushrooms you've ever seen.

There's more close up pics of the bike in my album here:

They may give you a clue about fitting stuff that shouldn't be fitted. If you want any pics of anything in particular then let me know.

I know I'm tackling this all ar#e about face. Your supposed to put the old engine in a decent frame NOT a great engine in a dodgy Jap 70's frame but if I'm going retro I might as well have authentic 70's handling

I WILL look at a bit of extra bracing on the frame and maybe a braced swinging arm. SORTED. What could POSSIBLY go wrong ?

Getting there, just got the bar today to make up the headstock part of the frame jig. Hopefully I can get onto this in next couple of weeks, just got to-
finish rebuilding a CR125 mx'r,
make up wheel spacers for the post classic,
make up seat mould for postie,
rewire Matchless.

Still need to find a set of carbs, hopefully the forks should turn up next week.

Gradually getting there !
Had the forks delivered so hopefully get a chance to have a look at those this weekend. Also managed to pick up some steel bar so i can get the headstock end of the frame jig built. Once the jig's finished then it's repair the snapped suspension mount and source a set of carbs.