Hi all,
Thought I'd start a write up on the new project bike. Hope you'll find something of interest over the course of the build. Also, by starting a thread, it'll hopefully make me keep my eye on the ball. The bike'll get built as and when funds allow and between paying jobs and building the post classic race bike. So pull up a chair and put the kettle on.This could take a while.
The basic idea is to build a retro 80's style bike so -
Steel frame
Update the brakes and suspension but keep it twin shock and rwu forks
Sit up and beg style, mainly 'cause it looks cool but also my back,elbows and wrists are knackered and I can't use low bars.
Bike is also going to be used as a rolling advert for the business, so there will be lots of fabrication, fibreglass and other stuff to showcase what I do.

Progress so far, the engine is of course a Thundercat, bought originally for an F2 sidecar which didn't materialise. This is being slotted into a '79 Suzuki GS750 frame picked up for $35 (about 18 quid) off Trade Me and I've just this weekend got a pair of wheels from a 600 Bandit.
The engine fits into the frame nicely but I think the top tubes will foul the carbs (I'm going to be using K&N's rather than airbox) so there will be a bit of surgery required there. I've roughly lined everything up by eye, and the chain run looks as though it clears everything. I can move the gearbox sprocket in a bit and the back sprocket out if I need to.
Next step is to make up a back wheel spindle and spacers then source radiator, fan and carbs so I can get the engine positioned properly.
New Zealand is a total backwater for bike building (although Hot Rods are very popular) and is completely obsessed by red tape. Even finding info on what is required for frame mods is a nightmare and everything as to be certified so wading my way through the paperwork could be a nightmare.
Anyway, that's about where we're up to at this stage. I'll try and post a few pictures as things happen and I'd welcome thoughts/ideas off anyone as well.

Pictures, we all love pictures

Pictures WILL be forthcoming. Soon as I get the bloody computer to co-operate

What's up with it?

What isn't up with it!!! ?
It keeps eating the camera software so I'm going to try my other camera. But fear not, pictures WILL appear at some stage.
In the meantime I've got the bar for the wheel spindle and I've started making a stand for the front end so I don't have to worry about getting forks at this stage. Spindle, spacers and stand to be completed soon as I get the lathe put together after a bit of maintainance

Hopefully there should be a picture of PROJECT YAMAHUKI. as it stands (or at least leans) at the moment. The Bandit back wheel looks as though everything lines up fairly well,at least the chain doesn't run through the frame. I can move gearbox sprocket in and back out a bit if I need to.
I've just scored an FZR1000 radiator off Trade Me for the princelly sum off $50 (about 25 quid) so just need a fan. Once I've got that I can fix front and bottom engine mounts and sort out back wheel / chain alignment.
Next stop is a set of carbs so I can get frame modded. There the fun is sure to begin

Still, it's building the tension,you're on the edge of your seats aren't you

What bit not working?

Where have you uploaded your pics to?

It's just not posting picture. Followed all instructions and tried straight of computer and through Photobucket, same result.
I've posted on other forums through P/B before without any problems.
HELP !?

Try this for posting pics if you've got them on Photo Bucket:

1. Go to the pic you want to post in Photo Bucket
2. Click on the Direct Link button. It will briefly say 'Copied'
3. When creating your reply on this site click the icon that looks like a picture, and says Image when you hover over it.
4. Put the cursor in the text box that opens and press Ctrl-V or right click and select Paste. Then click the OK button.
5. Your image should now be in the reply. Click the Preview button to check.
6. Repeat as often as required.

At last. I think I've cracked it. 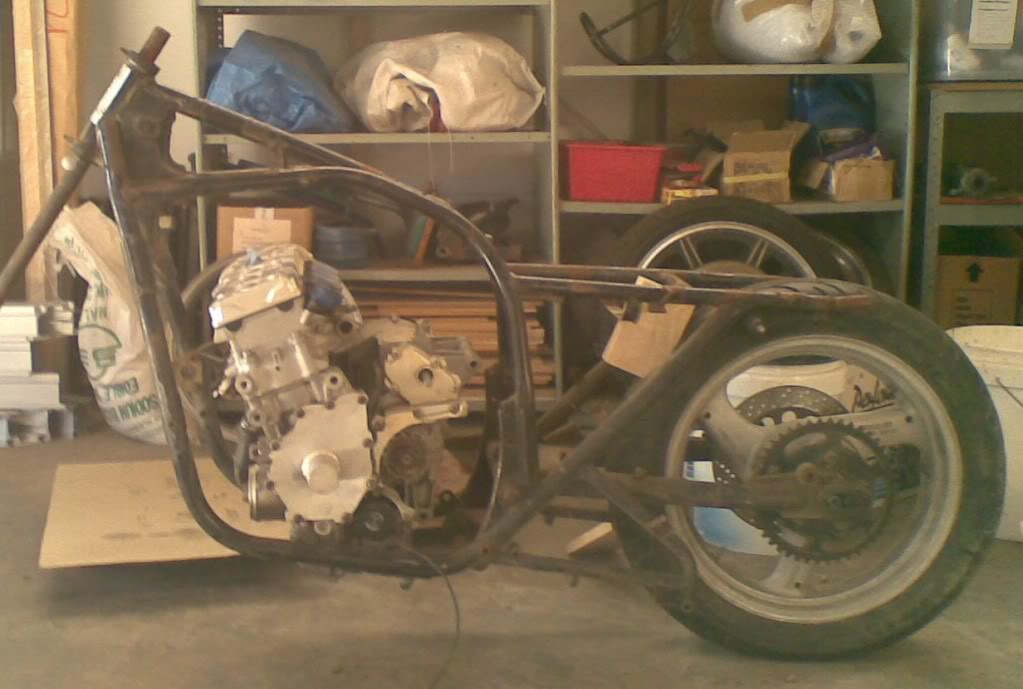 Need to adjust the sag on the rear suspension

THAT is a finely tuned,highly developed piece of timber.The more observant among you will observe that it is nicely planed to exact dimensions not just any old bit of 4" x 2"

Next on the shopping list is a set of carbs.
Are there carbs off another model Yam that will fit ? Or is anyone running with a non standard carb ? I'd be interested if anyone as a set for sale at a reasonable price.

Just a quick update on rather slow progress.
I'm just in process of tidying up the radiator, what a pain that is, straightening all the vanes with a screwdriver and ground down junior hacksaw blade.
Got an FZR 600 fan on order from UK e-bay. Soon as that arrives I can get that and rad fitted and fit engine. That will let me sort out chain run and back wheel.
Hopefully at weekend I'll get to have a look at building a jig to let me repair broken shock mount.

Slow progress is better than no progress! Sounds like your having fun with the rad, need to do mine soon! Keep it up

. I'll do a record of repairing the shock mount as well as this will be a fairly major job

RE the rad, a tool like this could be good for you

Always somebody trying to lever cash out of your wallet

To be honest, wouldn't get into half the fins with that. The ones that are bent are just about flatened right back and I can't straighten right out without them breaking off. It's not going to matter too much about them being perfectely straight anyway as I don't need to worry about fairing holding heat in. Only cooling issue is going to be in traffic and that's taken care of with the fan anyway.
Cosmetically, once it's painted it should look fine. The back isn't too bad so I may just reverse the radiator, that just means the outlet will face the opposite direction but that should't affect anything.

Thank GOD for that. Just finishing straightening radiator fins. That's 2 hours of my life I'll never get back.
Thundercat fan arrived from e-bay today, needs mount straightening out and a lick of paint but otherwise it's good to go.
I've started making jig for doing frame mods, so hopefully I can get that finished in next couple of weeks then I can get started doing some proper jobs. Only problem now is, I've got a deadline to finish the race bike so hopefully things won't grind to a complete halt while that chews through the finances

I'll try and post some more photos at the weekend.

and there's a set of carbs on Trade Me that finish on saturday so if I can get those then I only need back shocks and forks (ideally 600 Bandit ones as that matches the wheels and it would be nice to have 2 things that fit together).
Unfortunately things are taking a while as I've now got a definate date to get the Post Classic racer finished (October ) Still, once I get the jig finished it'll be full steam ahead. Hopefully I can be riding it next winter.

Good on you mate, sounds like a lot of work but it's going to be worth it pal