Figured i'd throw up a thread for my new baby, so here she is: 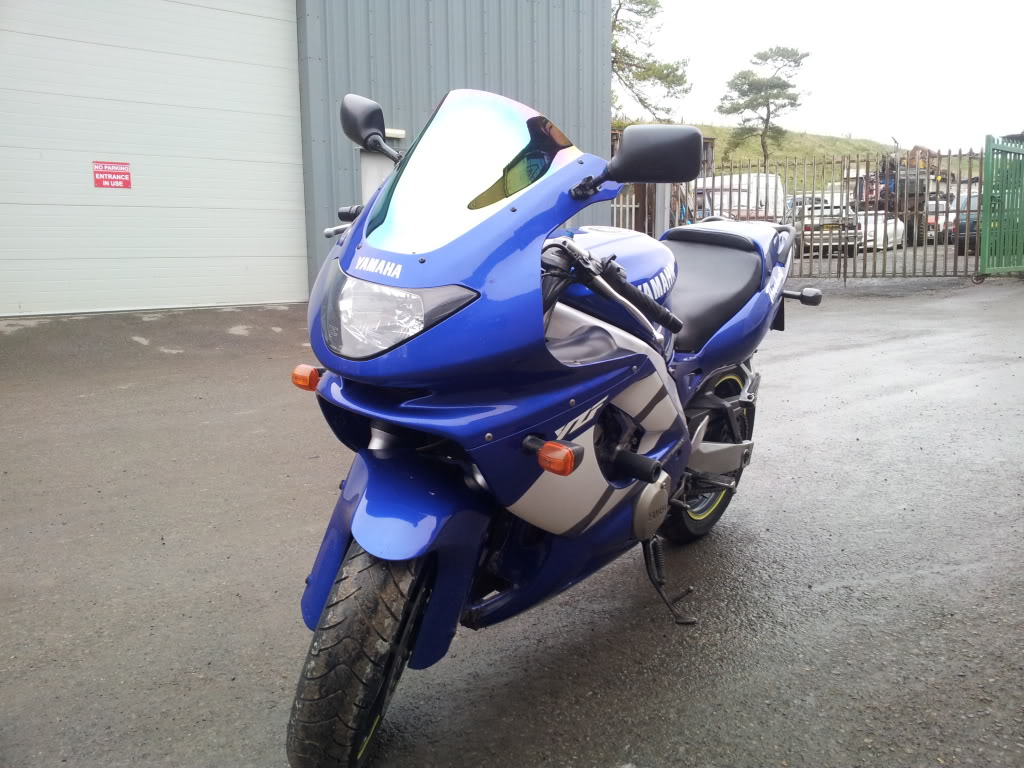 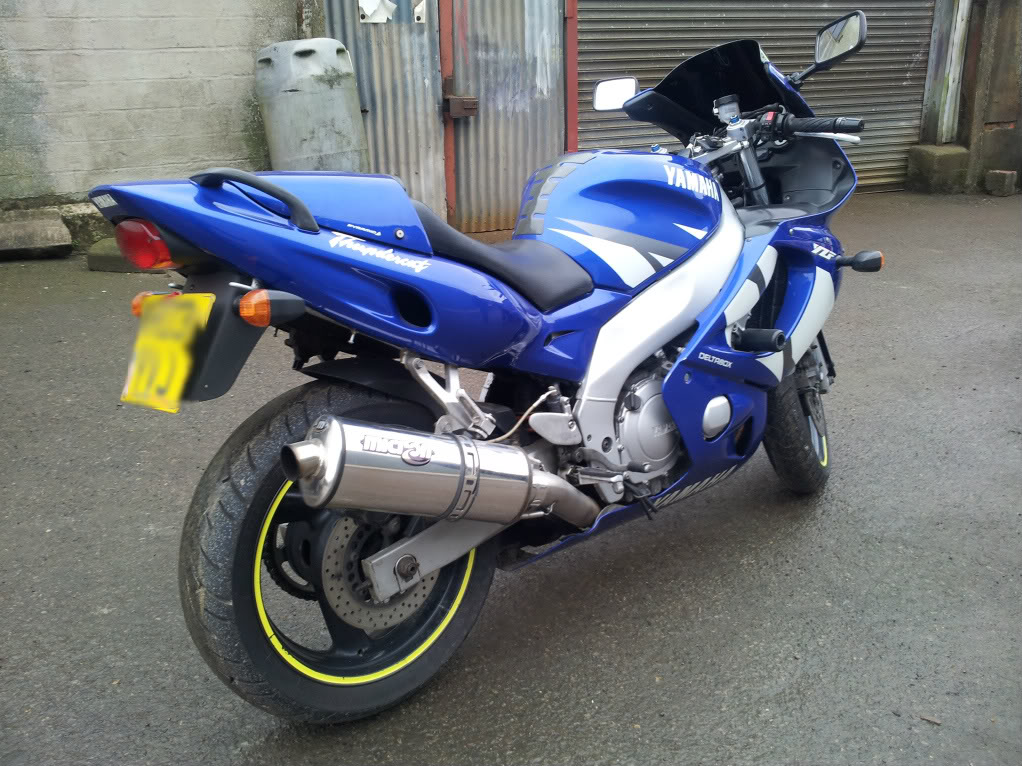 Picked her up This time last week for the princely sum of £1500.

First thing i did was to bin the crappy headlight bulb, and (temporarily) chuck in a H4 HID that i had lying around from an old VW Golf. Difference is amazing, i can actually see enough to be able to ride comfortably at night! 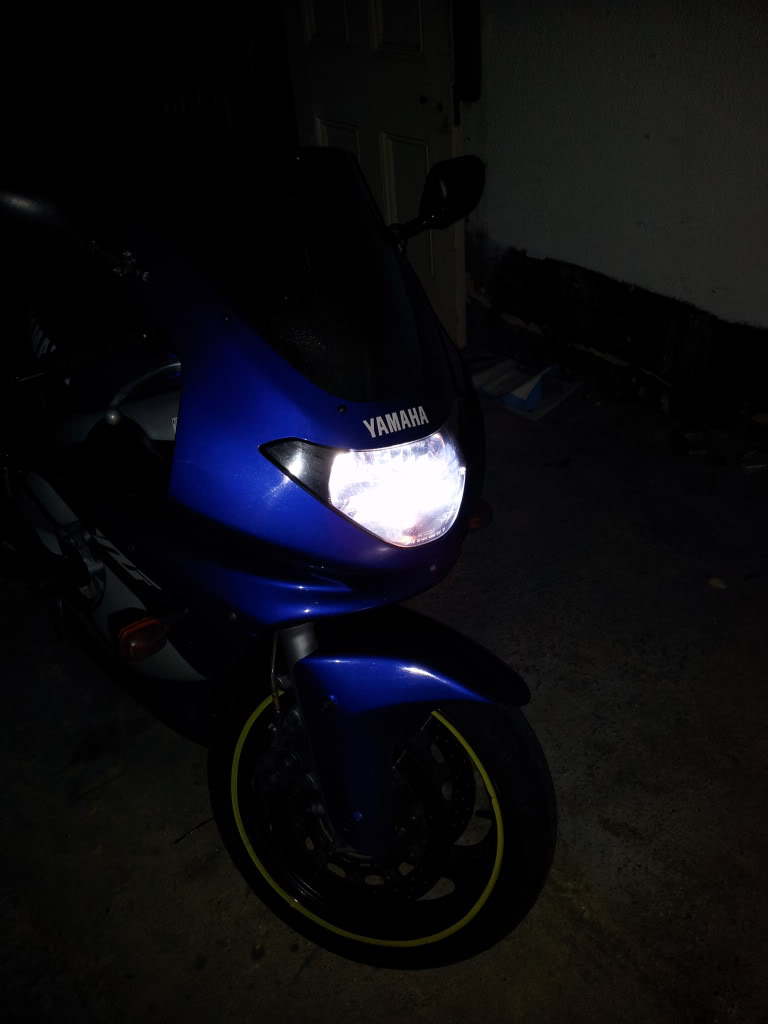 On Sunday i went out for a proper ride with one of my usual riding buddies Chris, on his CBR600RR. As we started pushing on i could feel the bike wasnt quite right. she was twitchy at times, yet slow to react at others, and was hard work getting her "right" in the corners. Thinking it was probably just me on a new bike i carried on, until i had a rather brown pants moment involving a hairpin, pushing out wide, and an oncoming 4x4....

So i made it home, and today me and Chris had a look over the suspension and set up, which was set waaaay too soft for a lump like me! Matey before me was about 5'8" and probably 10stone soaked through, whereas im 6'1" and about 15stone.

We managed to get the Preload and rebound damping set all round, but the front left Compression dampening adjuster is seized solid, so we left that as it was, and the rear shock compression damper is also bust, It just clicks endlessely and makes no odds to the shock at all.

just adjusting the rebound and preload though has made a massive difference. The bike no longer feels nose heavy, and is a lot easier to set up into the corners, so hopefully that will keep me out of trouble until i get chance to replace the rear shock and sort the front left out. Will probably go for a full rebuild and revalve on the fronts, and keep my eyes peeled for a Maxton etc rear.

Quick pic of the 'Cat with the RR, just because i can: 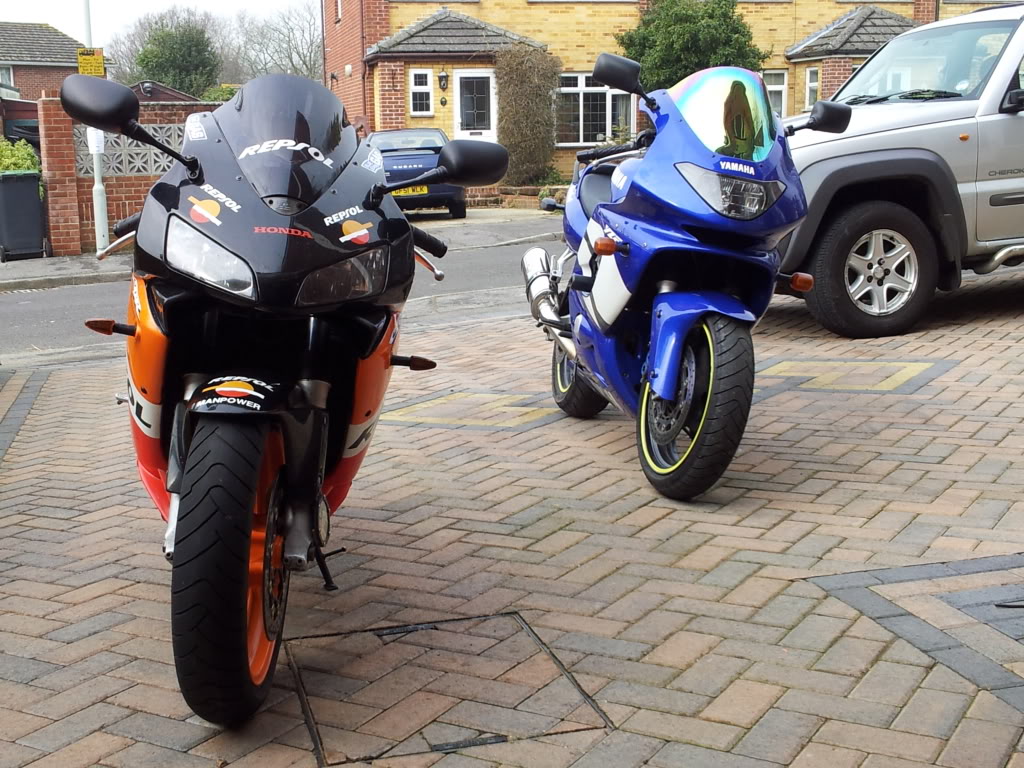 And whilst we were at it, i pulled the chipped and faded yellow rimtape off ( was a bit garish against the blue for my tastes if im honest), and replaced with some nice reflective blue stuff just to see how it looked. Ill need to redo a couple of bits as its a tad wonky in places, but im chuffed with how it looks so it will be staying.

Yellow can be seen in pics above. 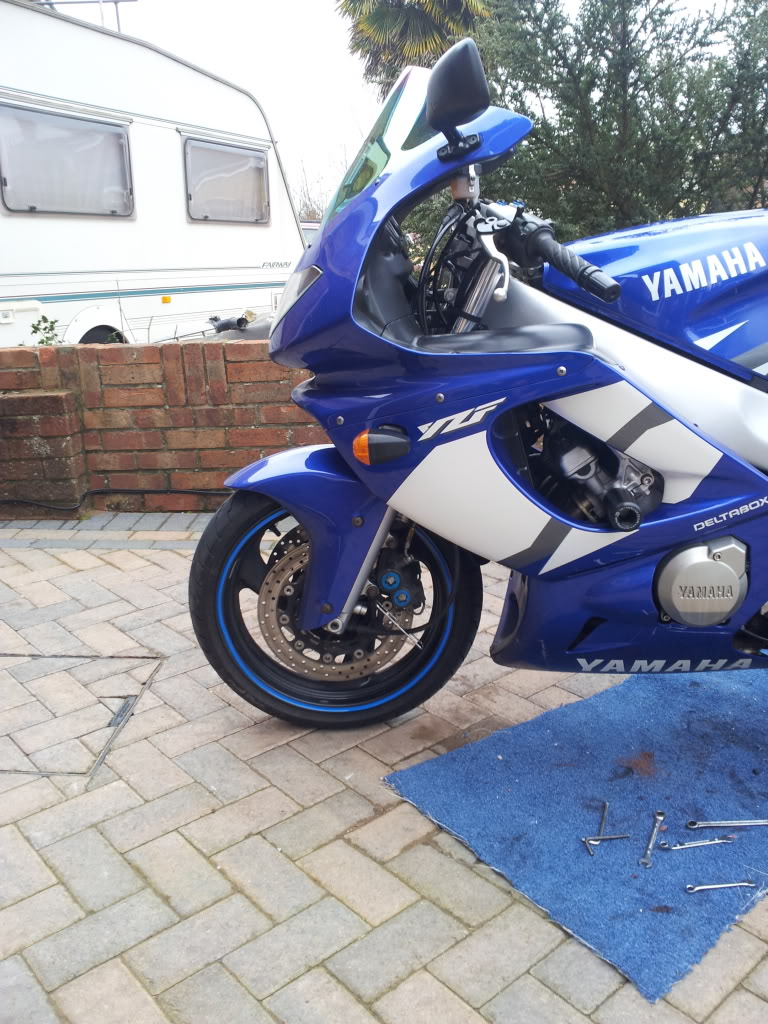 And what drivers will see at night when lights on it: 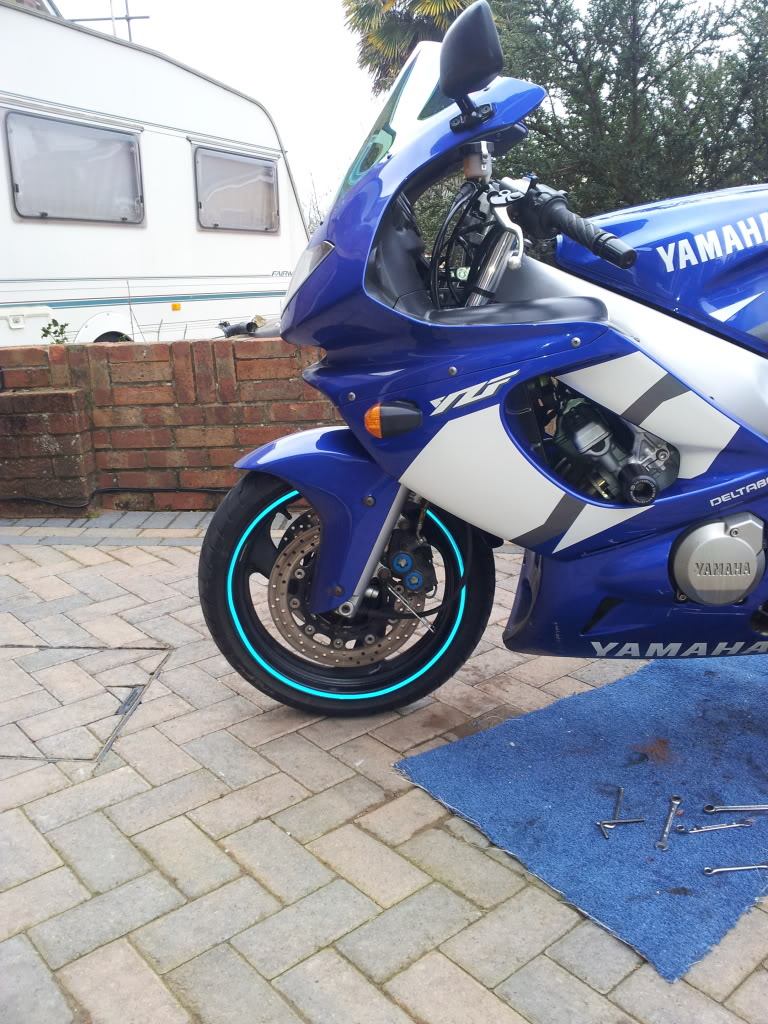 Pretty much all thats happened at the mo, will update this as and when bits get done/Broken/fixed!

Thanks Rosco, but im really not sure i can take any credit on this one, Just held the throttle where she was and prayed

Rosco could you do me a favour fella and chuck up a picture of your bike/mirrors? Spotted you mentioned in a thread about thunderace mirrors, could be just what im looking for to solve the elbows only rear view scenario! 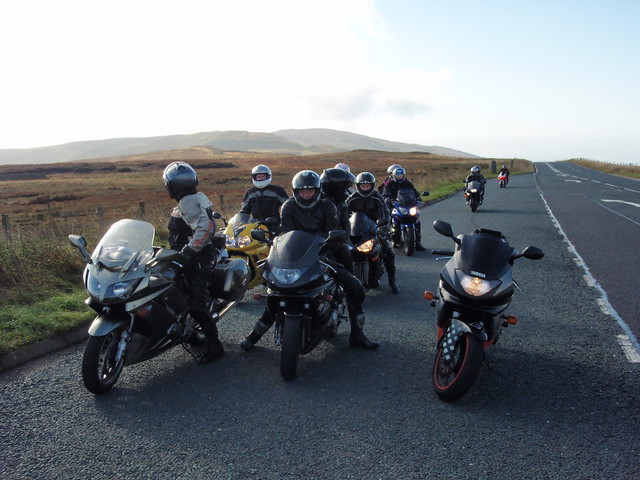 Mine is on the right.

Krusty's standard mirrored (I think) cat is next to mine for a comparison.
Check out my bad-ass indicators....I'm going THIS WAY!!!

FYI the view is better (and I think it looks better) than the original t-cat mirrors but it still isn't brilliant and you do still see a bit of elbow. 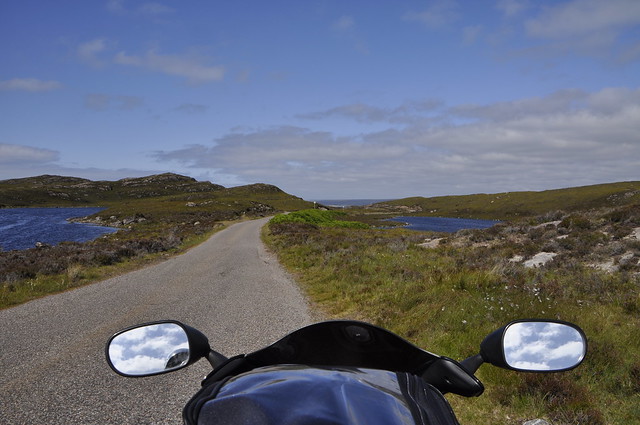 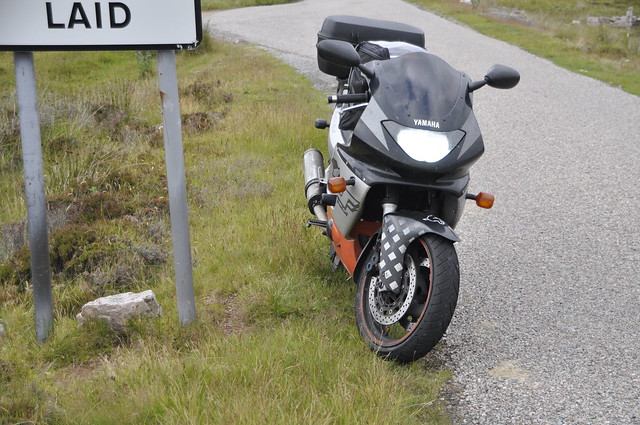 
Good before and after pics of the standard bulb to HID upgrade there too.

One of the member on the old MSN site sent me a document detailing what needs doing - From memory You'll need to drill out one of the existing threads and also drill a hole in the thunder-ace mirrors too. I'll try and find it.

All the bolts etc. are covered by the rubber sheath of the mirror regardless and they do fold in and out quickly and easily.

Cheers for that fella. They do look pretty damn good, only thing concerning me is if i want to put Tcat mirrors back on at any point then i dont think id be able to would i if i have to drill out one of the threads.

The standard thundercat mirrors are held on with a bolt that threads into the frame itself.

You could fit them again you'd just need longer bolts and a nut at the other side of the frame.

If you even loosened it again you'd need to take the inside plastic covers off to get to the nut though.

You'll not change back though....their ace.

Maybe some others would do a comparison for you at Wee Mac comparing mine with standard. I know YZFJohn has aftermarket one with built in indicators too. Bit sure if any attendees will have standard mirrors with spacers. Tbh that gave the best view but at the expense of good looks IMHO.

yeah im not a fan of spacers tbh. yes functionally they're great but im a looks man at heart

Also not a fan of aftermarket styling, i like oe looks, just slightly different... if that makea any sense

Sorry to hijack the thread, but is that just a HID bulb and ballast kit thrown into the standard reflector Rosco?
Seriously considering getting one of those sets and putting it into the 'Cat, but not sure if it'll dazzle oncoming cars too much? I'm not keen on the projector lamp mod due to the sharp cut off of the light pattern for unlit roads and corners!

Most of my 25 miles commute is on unlit roads.

Sorry to hijack the thread, but is that just a HID bulb and ballast kit thrown into the standard reflector Rosco?
Seriously considering getting one of those sets and putting it into the 'Cat, but not sure if it'll dazzle oncoming cars too much? I'm not keen on the projector lamp mod due to the sharp cut off of the light pattern for unlit roads and corners!

Most of my 25 miles commute is on unlit roads.

You could just get an ultrabrilliance bulb. Makes a huge difference, not much difference to the HID kit! I ride on a lot of unlit roads. Can't fault them

Yes it is a hid bulb in the standard reflector. The wiring just links into what is existing and it can be put back that way easily.

Not that you'd want to.

It is much brighter than the original but passes the MOT fine.
HID's are getting more and more common place on all road vehicles and do dazzle a bit.

Better to see what is ahead of you and be seen that worry about not being seen or other road users having to squint a little IMHO.

Thanks Rocco, much appreciated.

Ok so 4/5 weeks on and the Tank has finally gone back off for paint!
Trying to get hold of Genuine Yam tank decals turned out to be, well impossible actually! TCat ones are completely Obsolete, so after some headscratching i had a set of 2002 R6 ones ordered...Turned up tues and we put them up to the tank and trimmed them to fit today.

They actually arent a bad match at all, just slightly longer and a diff shape along the bottom edge of the tank. Careful marking, Razor blade and a metal ruler = Job done

Now to wait and see how good a job the painter does!

As i wont be using the bike for a couple weeks, i decided to give it a proper strip down, clean up, and a full service too. Looking at the state of the plugs, i think they have been missed off the service schedule for a wee while... but then they are an absolute pig to get to, so i can see why!!!

Am going to run Iridium plugs and a Pipercross air filter, if they dont give me a 1-2 bhp gain well at least ill get longer service intervals!

After that i suppose it would be rude not to chuck her on a dyno and have her setup to perfection eh.... Money Money Money!

Yeah you must be made of it

pffft i wish mate! but the cat is my daily transport as well as my toy so needs to be kept tip top

Well while the cat was sat there looking sorry for herself i decided to take the exhaust system off to give it a clean and polish.... while i was trying to get it off, i noticed that if i twisted the link pipe, the height of the can changed.....

So after some bending, clamping, twisting and generally faffing about i went from this: 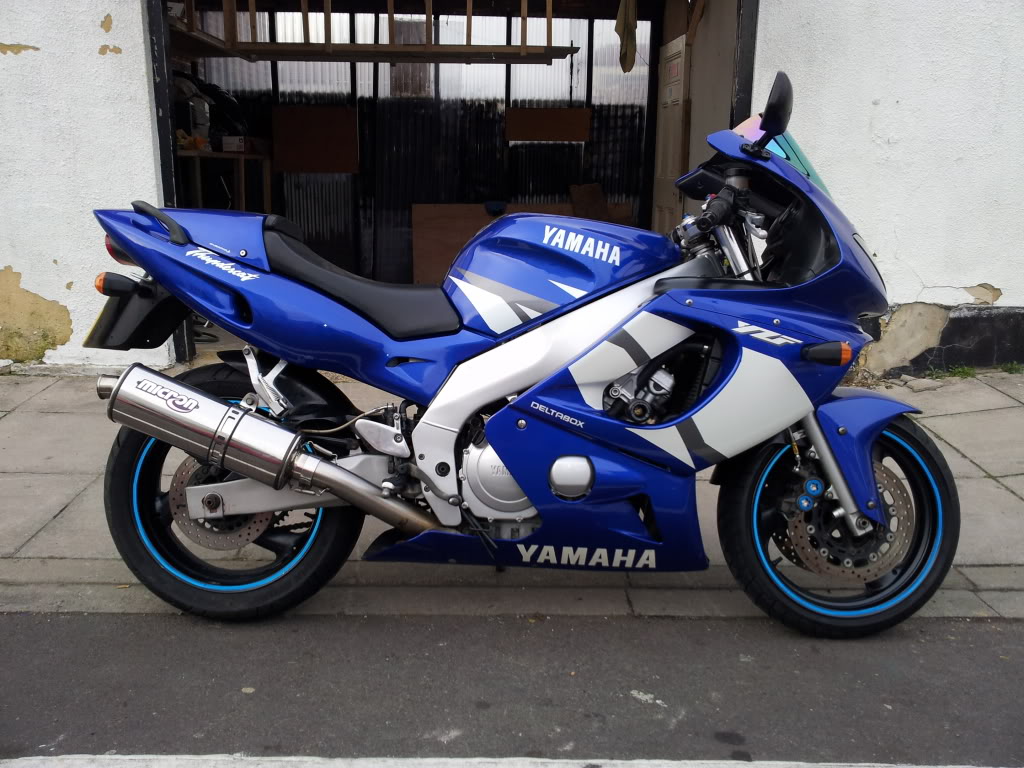 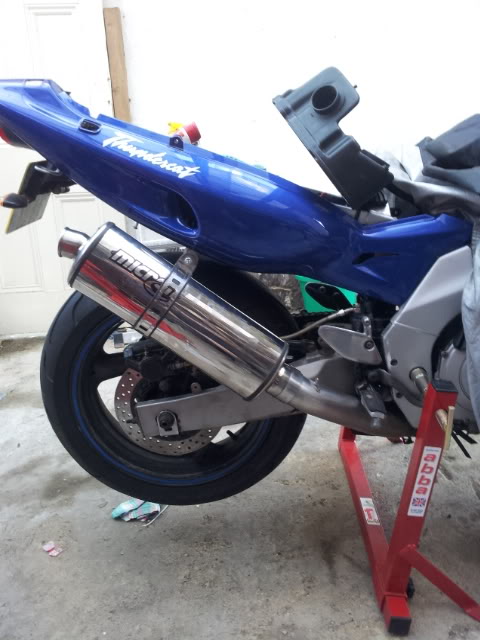 Few bits of tweaking to do here and there, but its 95% there i reckon.

On a side note i have ordered my new exhaust packing, and some spark plugs, and will be ordering my oil and filter and pipercross air filter on monday, so with any luck ill have her back together on friday..... fingers crossed!

Looks tons better mate and I didn't think it looked bad before. Really nice that!!

As a purist I prefer the exhaust to follow the line of the bodywork, so although it is low, the first picture makes me feel warm and fuzzy. The ultimate would be a high level can that followed the lines, but thus would require a different link pipe design.

But hey, I'm a conservative old fuddy duddy and what I do like is that you had a think about it and made it work.

Completely get what your saying, i considered making up a new link pipe to do just that, however being an oval can i dont think it would sit/look right. A smaller round can possibly..... i have a few things potentially up my sleeve....

I got a real nice carbon stubby that could go on there , lol

buy mine steve an ill get somethin real special

Oh and one other job i undertook a couple weeks back was changing the colour of my screen.

I just wasnt feeling the iridium all that much anymore and decided i wanted it black. I could have just bought one, but i figured im not bad with a rattle can, so id give it a go myself first...

Didnt come out half bad i reckon: 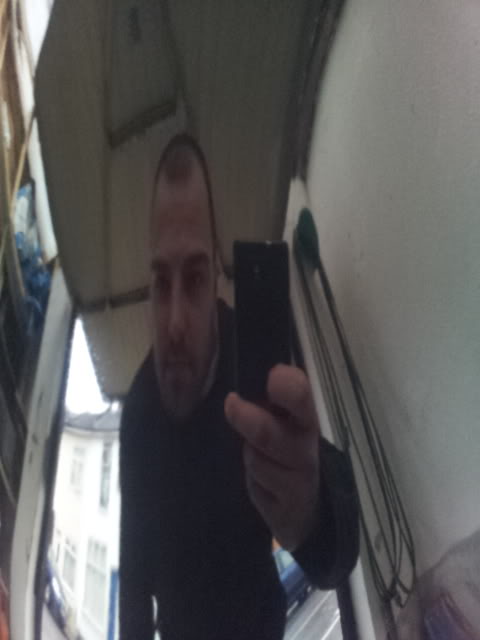 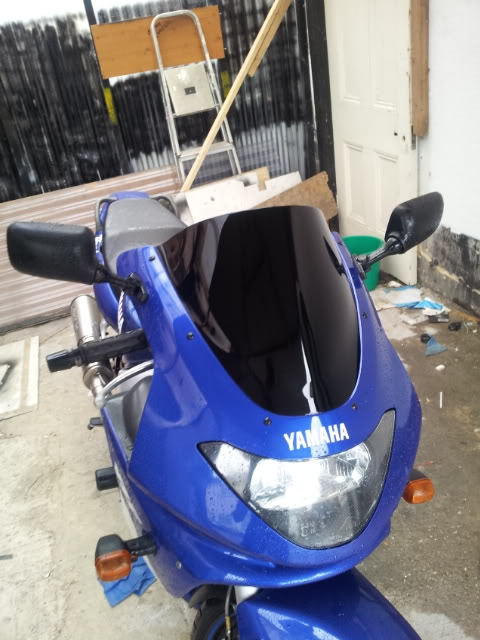 Saved me spending £60 on a new one anyways!

Looks much better than the bubbly rough mess that's on mine (I didn't do it!).

Bikes looking fantastic, can't wait to see what exhaust you're going for next!

See what happens on ebay!

Did you buy the dual pipe from Grant?

No mate. too much effort involved to make that work properly... but saying that iv just bought one thats going to need a rejet and rolling road tuneup to work properlt....

lol you can't win! I would love to put a dual exhaust on the cat but its just not the right time for me, plus I think I would probably pay a pro to build the pipes lol