I have just put the bike all back together and it will not allow me to go over 40Mph??

After all this work, and finally put back together, it will not allow me to go over 40Mph??

robertcains wrote:Can you describe its symptoms in more detail? Is it instantly cutting out like its electrical or does it feel more like its sputtering from fuel or air starvation? Is it better or worse on choke? If you back off the throttle when it happens does it suddenly fire back into life on half throttle?
It's very difficult sometimes to describe what's happening in words, are there any mechanical minded peeps near to you who could test ride the bike on your behalf?

I have some friends at work that have been riding for years, and said that they can take a look at it for me.

It is difficult like you say to try and describe the problem, but it does not feel like an electrical fault as it goes up the gears fine and rev's are fine but as soon as you reach 40 Mph it feels like its restricted and does not want to go anymore. I have also noticed that the rev counter and speedo also takes along time to move when picking up any rev's and speed once the bike is under strain ( in gear).

It ticks over fine but as soon as you go over 30/40mph it sruggles. My friend has just had a quick look and spin and he is not convinced that it is firing correctly, as he has been on it before and he confirms that it sounds completley different (not the exghaust) and thinks it is misfiring.

If you have a cylinder that is not firing then one of the exhaust downpipes on that cylinder will be noticeably cooler,
Obviously I don't recommend touching the pipes to test this but by holding your hand near to them without touching may give you a clue, failing that most mechanics have an infra-red thermometer.
If this appears to be the problem I'd go down the line of checking the plug leads are on in the right order, & that the coil connections all seem sound etc. Also pop your old plugs back in to eliminate a faulty plug?

So - it revs right up to the red line in neutral. That implies the ECU isn't limiting the revs. at least under no load. And it can't limit the speed, either, as it's a mechanical speedo pick-up on this bike, and there's nothing to tell it which gear it's in (apart from neutral) so it can't work it out from the revs.

It's a redundant spark system, with one coil firing cylinders 1 & 4 and the other 2 & 3. So if you switched the leads for e.g. cylinders 1 & 2 it would only run on 3 & 4. I'd have thought that would be pretty obvious at tickover, in fact it probably wouldn't.

I can't see the exhaust making such a huge difference - a few b.h.p. off the top end, maybe, but nothing as drastic as this.

And the obvious things in the fuel system have been checked.

The only thing I can think of is maybe the throttle position sensor has been disturbed or its connection has come off. I don't actually know what result that would have, but it's certainly worth checking, anyway.

Like Steve, I'm trying hard not to blame the immobiliser!

The most strangest thing happened today. I decided to take my bike to work to show my friend, and he said he would be able to take a look at it over his lunch break. But at the time he started it up and said that it did not sound right, and it sounded like it was misfiring??

Then at lunch he wanted to take it for a spin (to get over 40Mph) so off he went.But before he left i disconnected the alarm. On his return he parked up and said "so what up with it? i just got 120Mph not a problem" lol

So obviously i was amazed that there was no fault, so i reconnected the alarm, and took it for a pin. The bike just came back to life and pulling away in all gears as if there was nothing wrong in the first place.

Very odd that this has happened, but i am very glad that everything seems to be ok now. I will finish off the paint work now and wiring then i will probably get the bike checked over in the new year to be on the safe side.

Intermittent faults are the worst, lets hope the problem has got bored and gone away 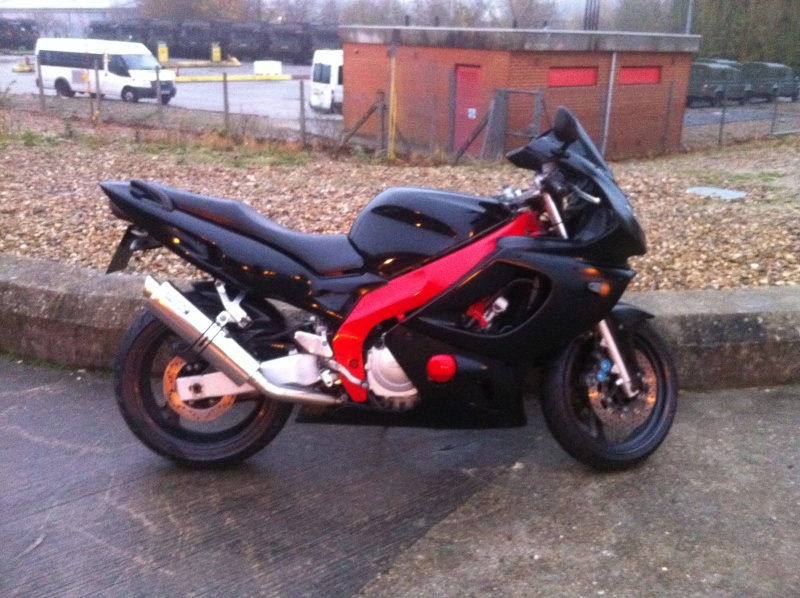 So glad it's back up and running properly, just need to tidy it up and then possibly get it checked over in the new year.