Pick up a Cat on Sunday. Not got a clue of year nor mileage. Just know it needs a battery to run as it was on the road a few month back. Few things for MOT then its back on the road after a three year break. First large yamaha as well as my last was a DT125LC back in 83

Hi, welcome. Hope it's just a battery.
They are great bikes. Take it easy, even though the 'Cat is advancing in years it still kicks a punch.

Hope the weather plays ball for you and you can get a few miles in.

Good luck with the new bike.
Plenty of knowledge on here (in the advanced search) and failing that there are a few thundercat boffins kicking about too if you have any questions.

Cheers guys. This is an early model in a horrid and now flat shade of red. Cant decide if i just Mat Black it. Streetfighter or try and find new plastics at a later date. It will just be going in the shed for a few weeks as in the middle of trying to make an old LDV Convoy into a camper. I do know it wants fork seals, front tyre, C&C and brake pads. All i can do myself what saves a bob. 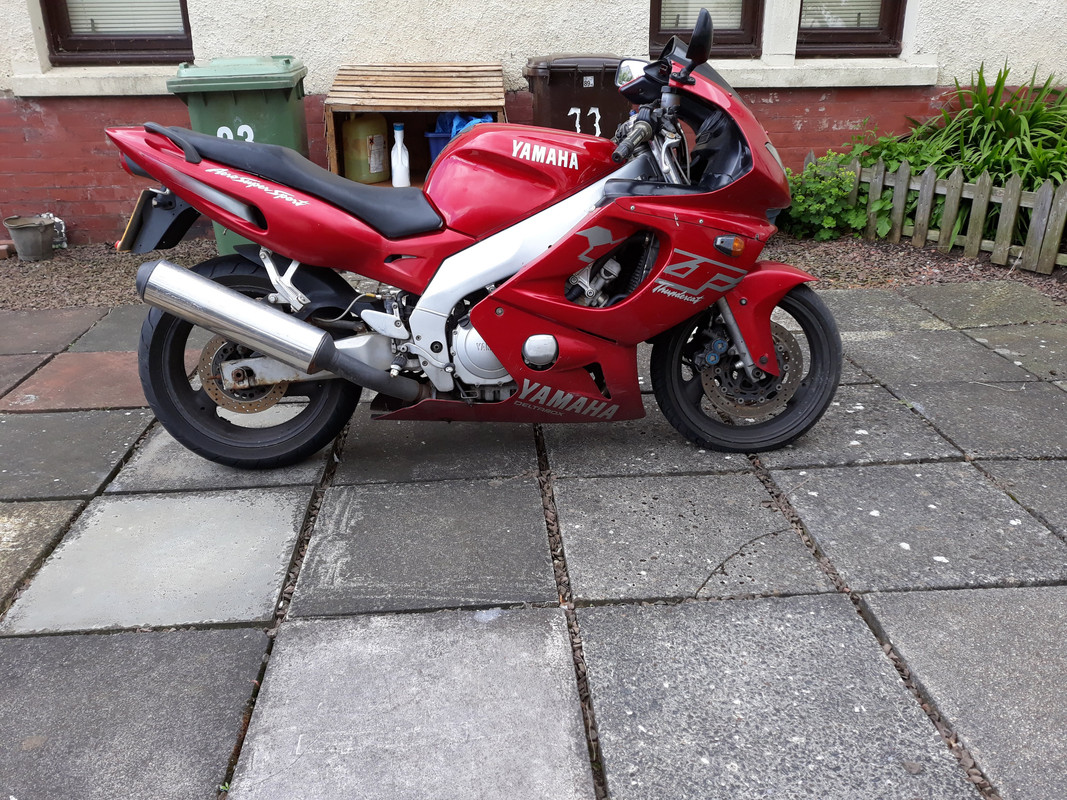 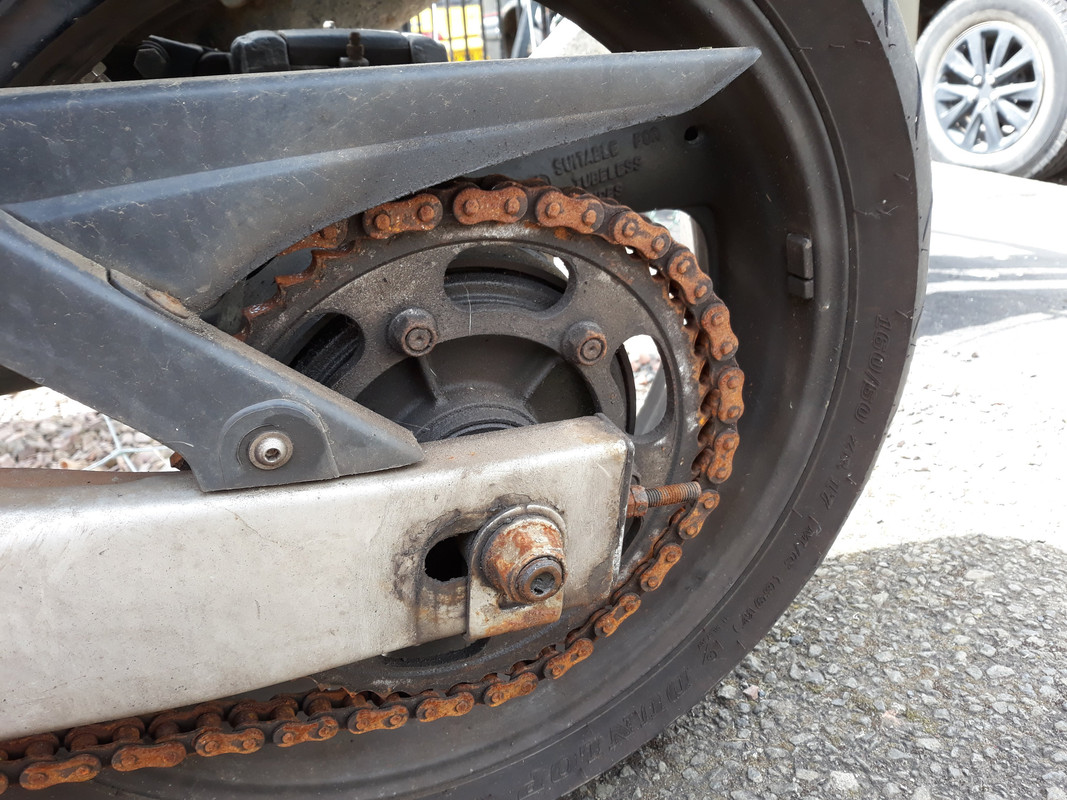 Look at the adjuster 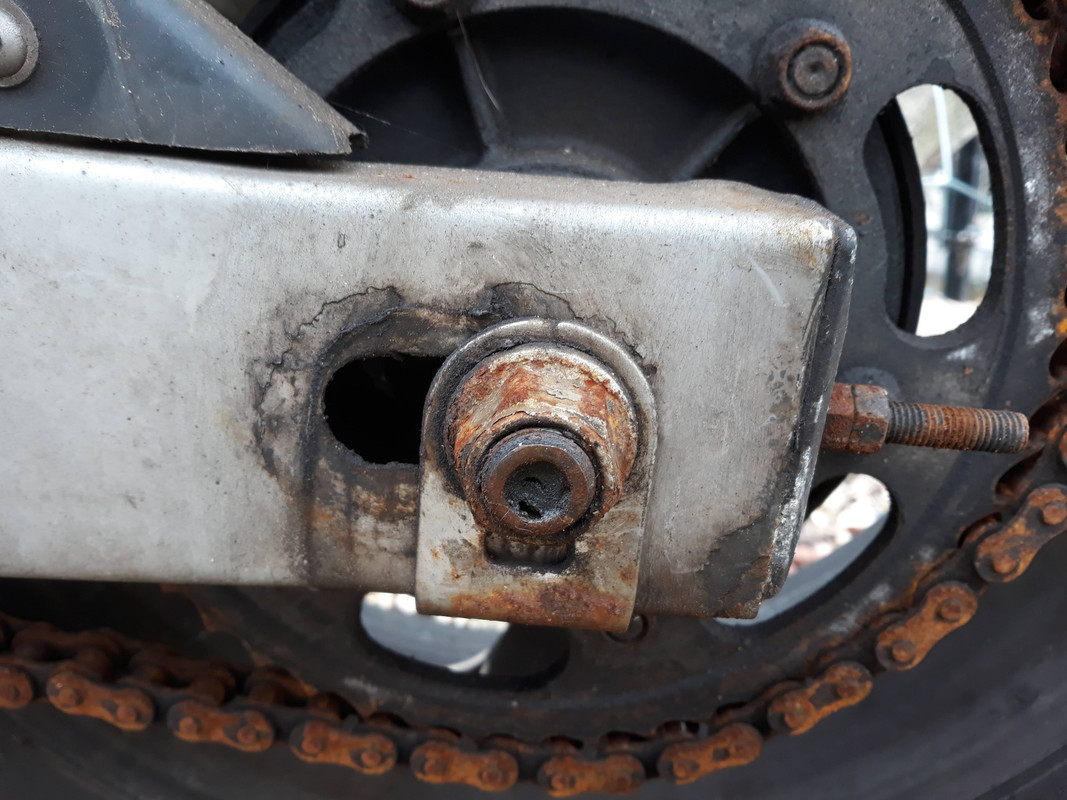 Front tyre may explain why he wend down on a roundabout 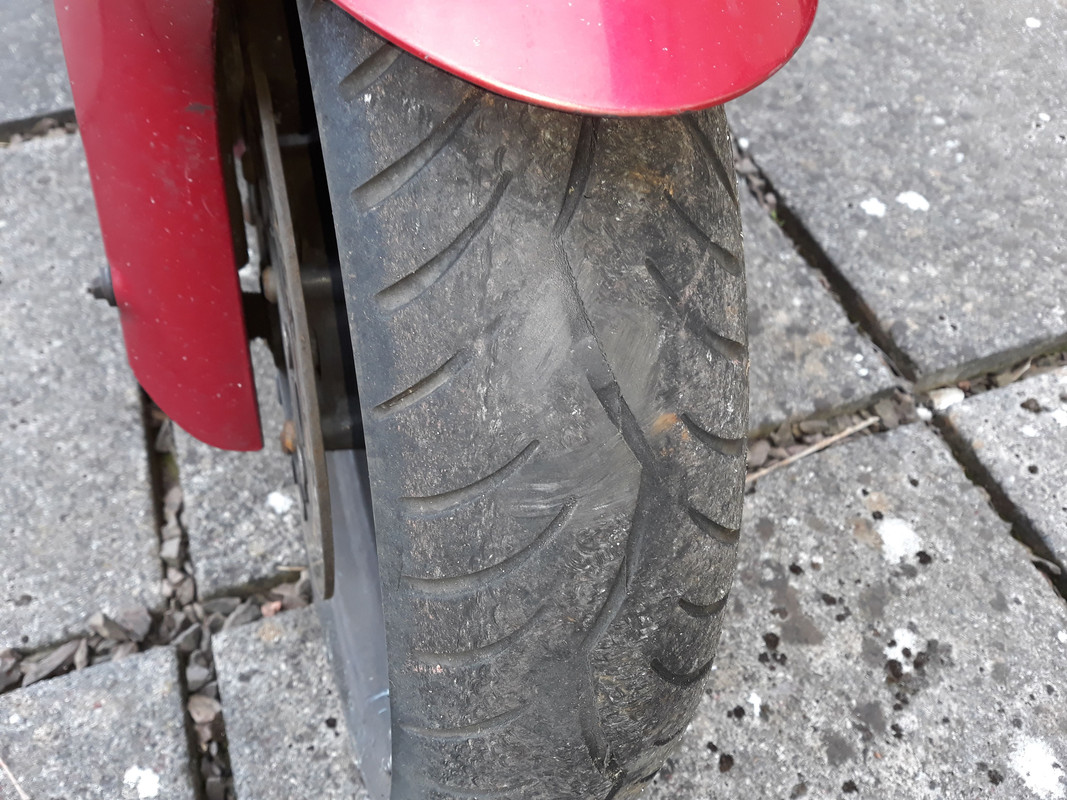 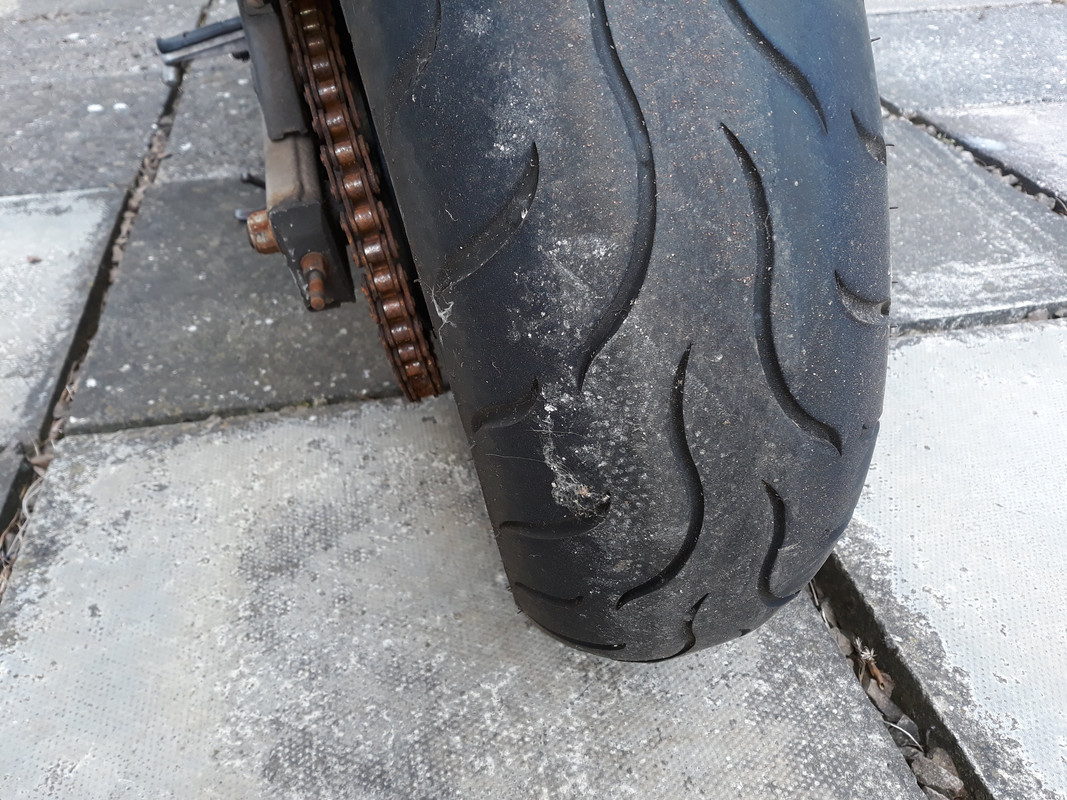 Disks are not to bad, ever slight lip so they are on next years shopping list 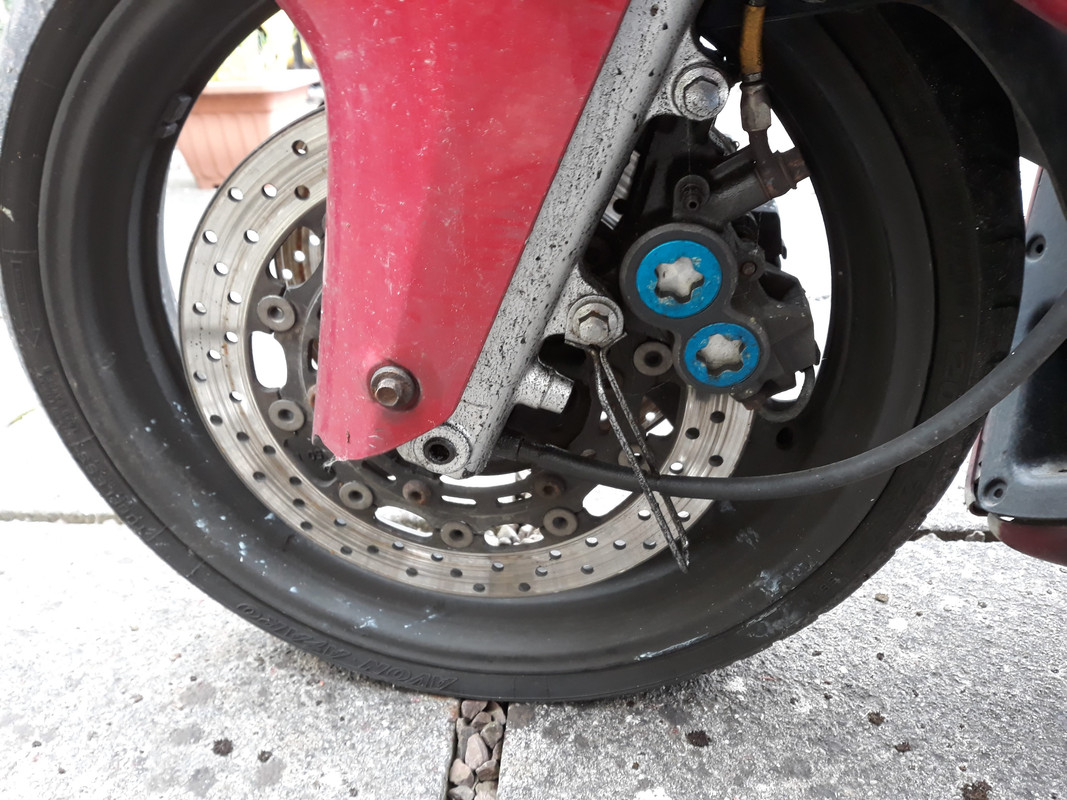 Back is surface rust but... Is that caliper hanger buggered? Just noticed the lack of metal holding it to the spindle 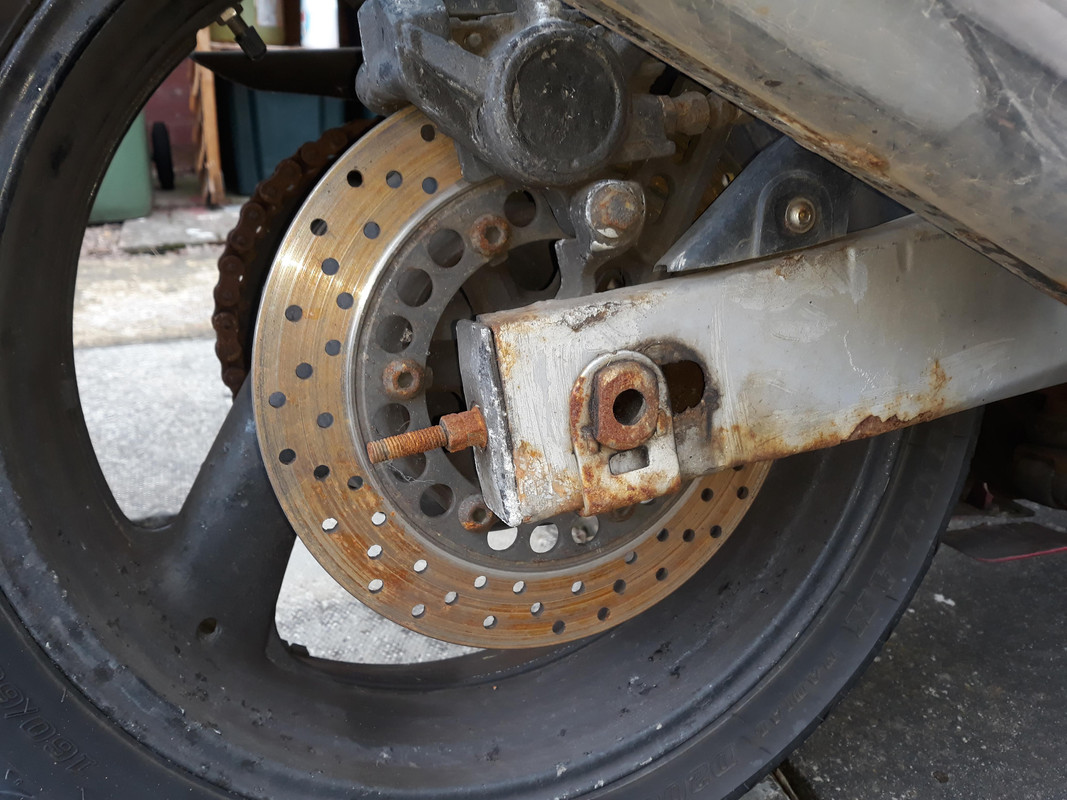 Rear shock. Ill see how that is after a clean 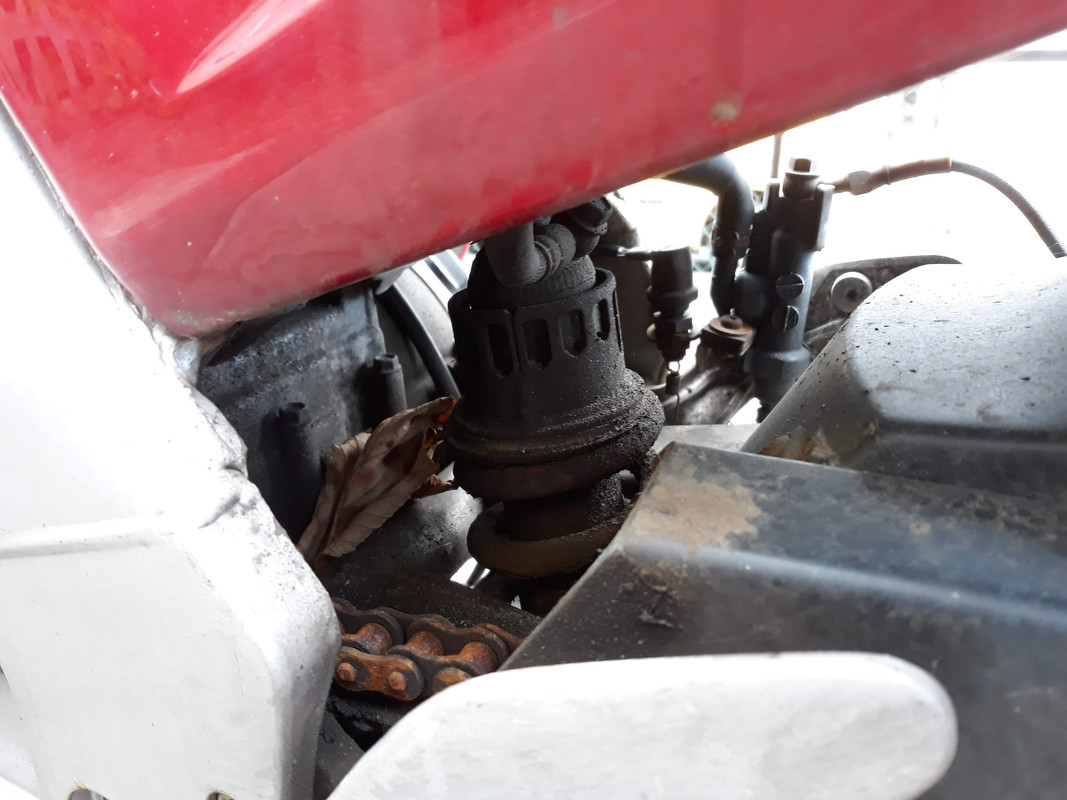 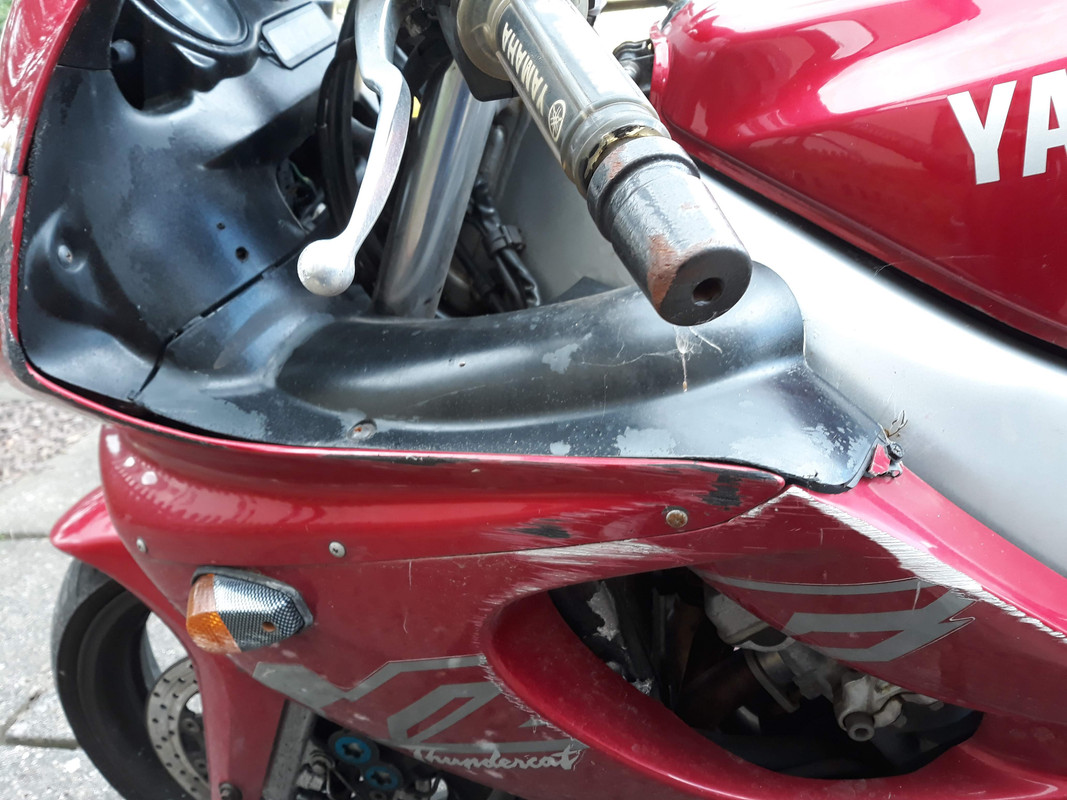 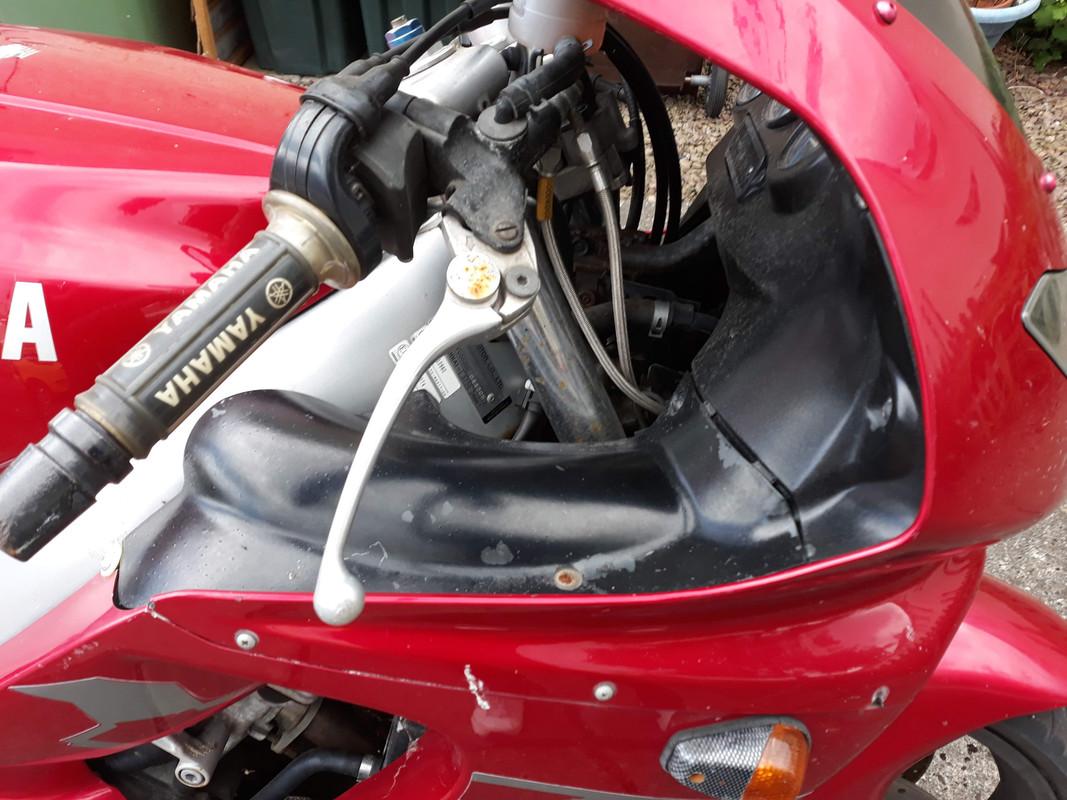 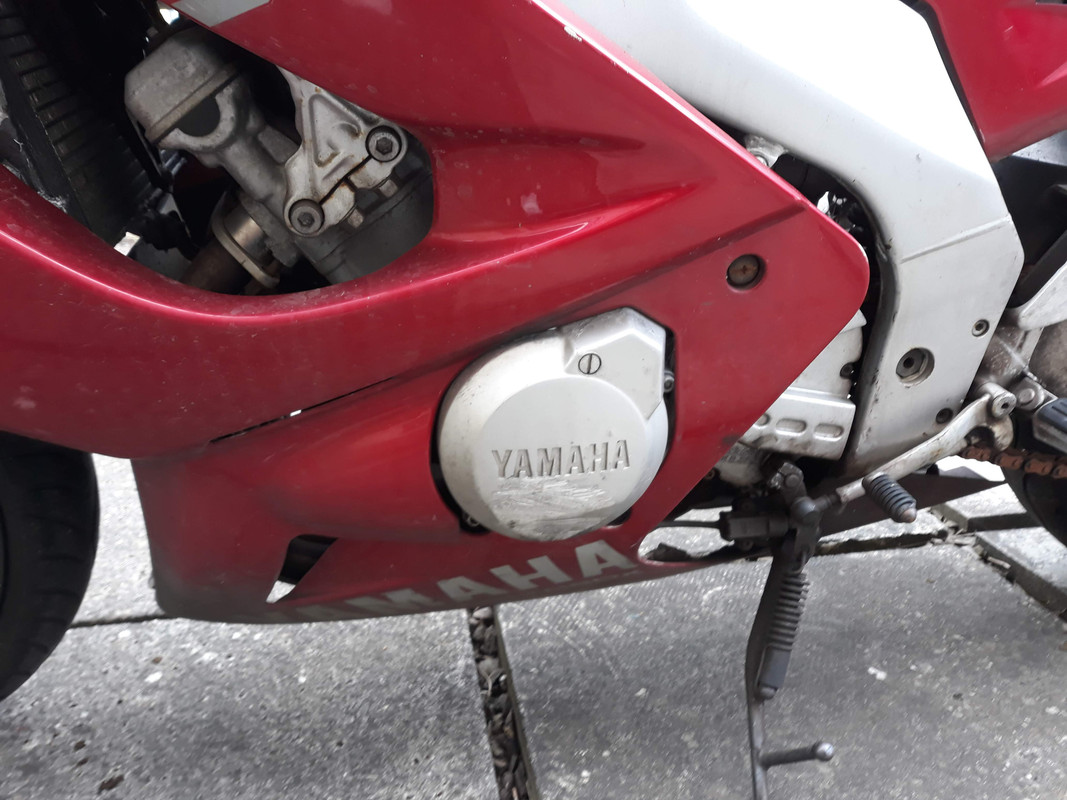 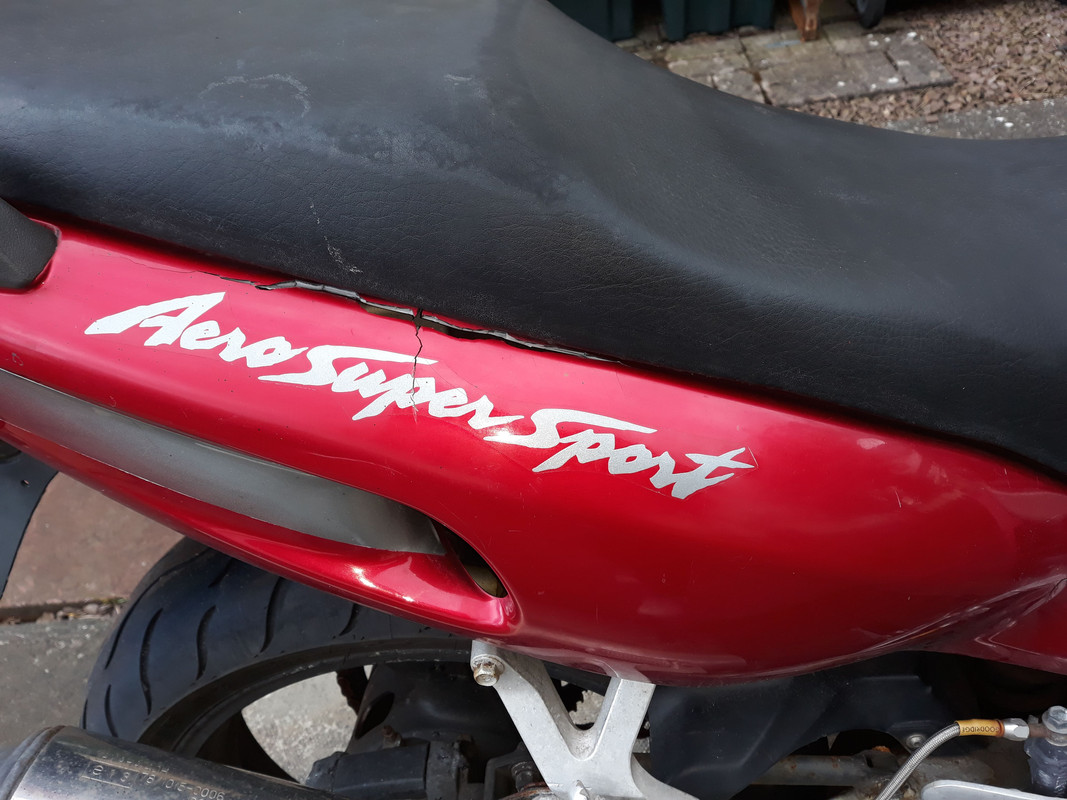 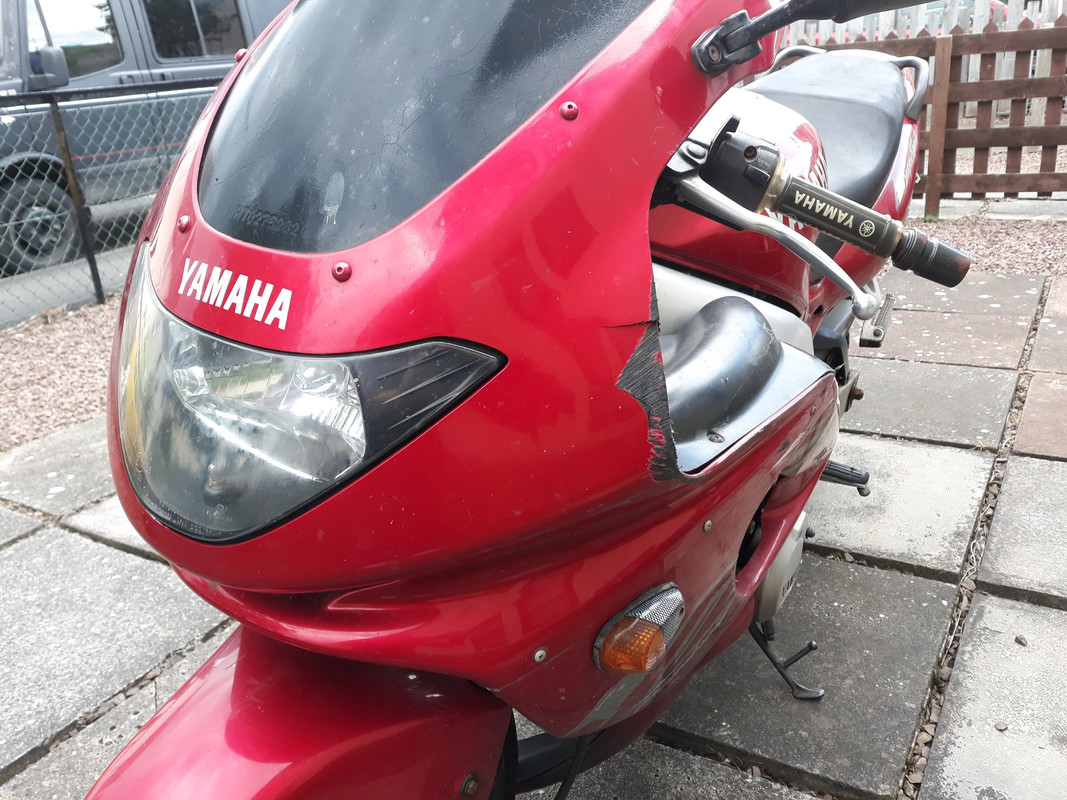 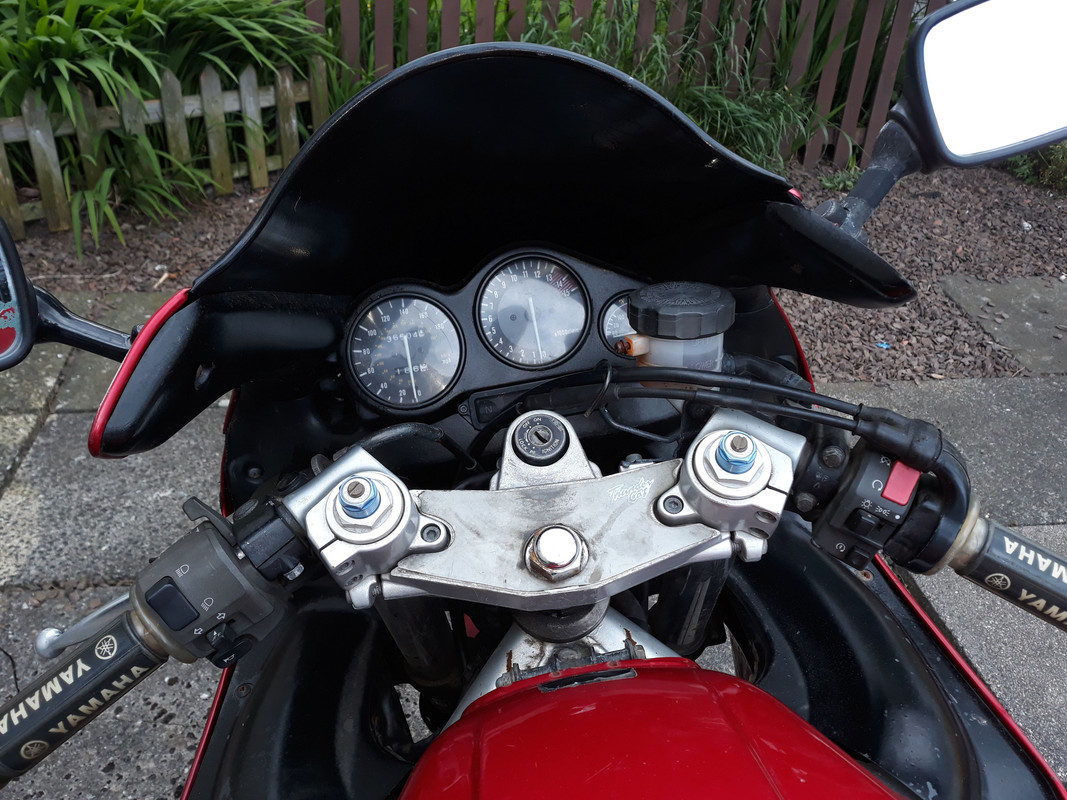 Now is this cam chain and is there any known issues with adjusters being crap? Bike is around 36k so thinking just a stuck adjuster

Best start earning some money to throw at this. Lucky it was cheap

That sounds a bit rough, poor thing has been very neglected by the look of it. Hope you can get it running & looking good mate.

Doesn't sound like cam chain, more like possible down pipes blowing and a misfire. Check your carbs, might just be dirt in them. As for the caliper carrier, not that good a photo but it looks ok. Just check it when the rear wheels out, if you can get the spindle out of course,

Poor bike!!
It doesn't sound like the cam tensioner to me. As far as I know they didn't suffer tensioner problems like the later bikes do ( my Tracer had a failing tensioner).
My second 'cat sounded a bit like that, maybe not as bad initially. In my case it was a loose spark plug, it did sound like an exhaust gasket.

However mine was never a happy bike and in-spite of my local spanner saying he'd cleaned and adjusted the carbs, even a second opinion said the same and the Yamaha dealer refusing to look at it, oddly when I chopped it in at the Yamaha dealer - they fixed it. It was the carbs, a previous owner had twisted every screw they could find on the carbs.

I take it that it's been standing for quite a while, so the carbs would need a good cleaning, the calipers will also need a service.

Not done a thing with it yet but yes it was standing doing nothing outside but saying that it was just around 3-4 month. This is just pure neglect with the last owner. I do remember him getting the bike and it was never going to win any beauty prizes it was a complete bike with no great cosmetic issues apart from normal Wear and tear. It also never made that noise. When it was parked up at home also with previous owner it was on grass what will not help when damp.

So. Money in bank today and order up front tyre, C&C, fork seals and exhaust gaskets. If i find time ill get that done first and away for an MOT. Oh, just remembered. Resistors as back indicators are LED so fast flashing. Once that is done ill strip out the plastics and see what i can fix and replace. Radiator out and re painted. What is the best pain for that. BBQ or any better? Not fussed about a gloss finish. Tub of break and clutch cleaner also as that makes a great general cleaner for the engine parts.

Quite looking forward to getting stuck into this one now

jaysus 1888, mine is in way better mechanical condition than that, you could of had it for the same money (new suspension too)

bring it to pembrey!

ill take a look what bit's i've got laying around, i've got discs, nearly new fork springs, a rear caliper seal kit, shiz like that.

noggin is meant to be taking it but it hasnt gone yet.

davenuk wrote:jaysus 1888, mine is in way better mechanical condition than that, you could of had it for the same money (new suspension too)

bring it to pembrey!

ill take a look what bit's i've got laying around, i've got discs, nearly new fork springs, a rear caliper seal kit, shiz like that.

noggin is meant to be taking it but it hasnt gone yet.

Having a bike for spares would be great but no doubt you are the other end of the county. Has Noggin not go enough project on the go? Two bikes and a loft bed

Cant do Pembrey as i am in the Peak District for a meet if LDV owners having a piss up in a field. Sad i know but i am Admin of the group so need to attend

Plus im not a fan of trackdays and, Weeksey would probably do my nut in after half an hour. One thing that is working well on this bike is the brakes but i do have a little groove in my front disks. How is yours, any plastics?

As it's been dropped hard, it might be a idea to remove the handlebar grips to check if the bars are bent or cracked. Had a bit of a shock when I checked mine.

Welcome to the forum. Thundercat is a great bike, but yours does need some love

I have a soft spot for the LDV Convoy, I used to work for the companies that supplied the back axle (15HA single rear wheel - rare & 16HA for the twin rear wheel), and the handbrake and clutch cables. GKN for the axle and Acco (later DURA) for the cables. I helped develop the clutch cable for my sins on the earlier 400 and it was carried over to the Convoy. I even went to the launch of the Convoy in mid 1990s and have the model van they gave out on the day. I wound doing three cable for it in the end I think, for different engines and gearbox combinations I think. Slow, tough old buses that liked to rust!

So you are responsible

There is still a lot of them around. They seem to have a bit f a cult fallowing now and they are ideal for turning into campers. Summer months you can pay a couple of grand for a good late model. TBH they rust no more than the average Transit or Sprinter from the same era. I have the 2.4 Duratorq what i managed 90 out it one day, not nice due to the vintage steering system but aye. Great old vans. This is my old bus on day one or a trip to Italy. This is a stop over in France 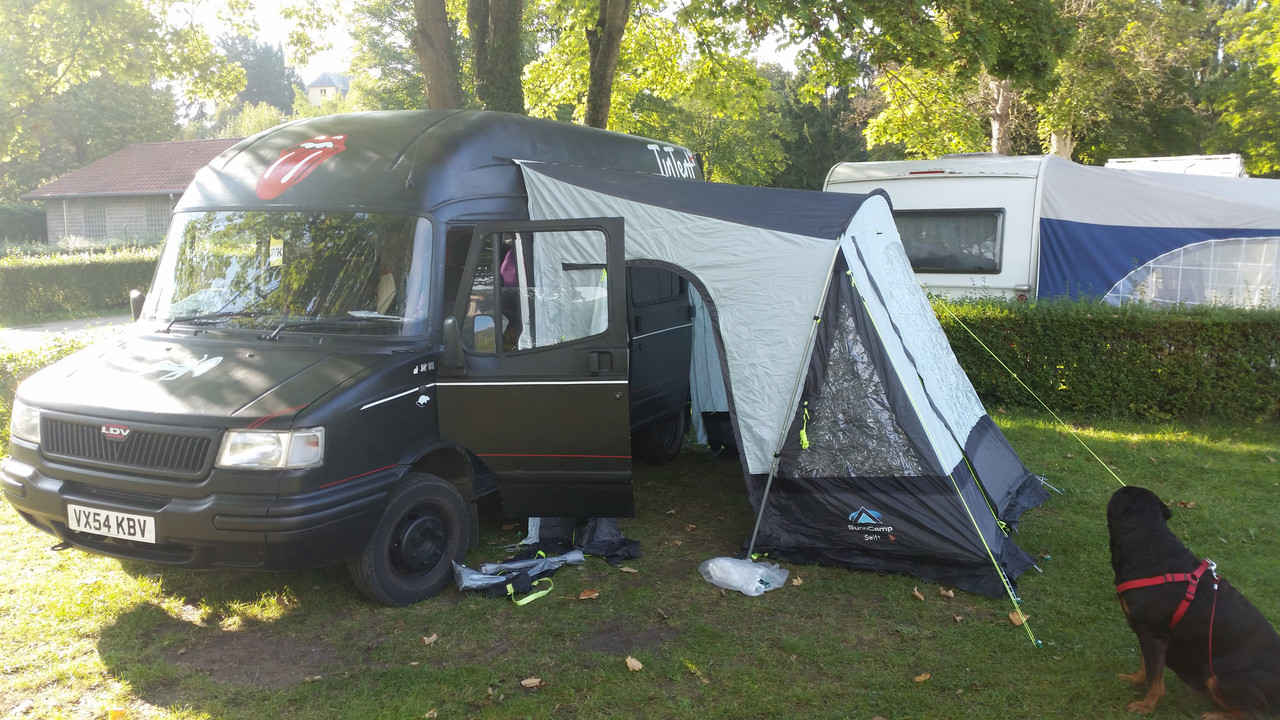 Nah. Post office had them all factory painted red did they not. This was White out the factory. I did buy it close to you though it was a kids outdoor adventure group bus from Derby.

Nah. Post office had them all factory painted red did they not. This was White out the factory. I did buy it close to you though it was a kids outdoor adventure group bus from Derby.

They did indeed. Used to see loads at the factory when I visited. The PO boys used to give them a hell of a battering

I've driven a few vans in my time and the Sherpa ranked number two on my least safe feeling vehicle (all vehicles) driven scale.

Number 1 was an old Ford Transit armoured van, previously used in Northern Ireland, where almost all the armour was behind the cab (about 5 tonnes of it...thickest in Europe for it's size apparently), meaning the cab was effectively the crumple zone, and the Sherpa felt the same way, only without the armour.

Bike is looking a bit neglected (left in the rain) unfortunately, rear sprocket is shocking (front probably as bad).
It's so hooked the chain is starting to ride over it and the chain is so stretched that the tensioners can't handle it even after being wound out to the max.
Easy way to check the handlebars is to go full lock both ways, there should be a gap between the bar ends and the tank (so you don't get a hand trapped if you drop it).
Discs will probably clean up with use though.

How cheap was it?

I've driven a few vans in my time and the Sherpa ranked number two on my least safe feeling vehicle (all vehicles) driven scale.

Number 1 was an old Ford Transit armoured van, previously used in Northern Ireland, where almost all the armour was behind the cab (about 5 tonnes of it...thickest in Europe for it's size apparently), meaning the cab was effectively the crumple zone, and the Sherpa felt the same way, only without the armour.

We used to throw the old things about with aplomb, fun in a weird way!