Another beautiful sunny morning greeted me as I awoke and I had to check the GPS on my phone to ensure that I was actually in Scotland! All was going well with the day, once again I had been greeted by the smell of freshly cooked Bacon as I wondered downstairs. Then came the crisis…I poured my tea and went to add the essential sugar…and there was none! I mean Ross, you only had the dates, attendees, accommodation, routes, rest halts, food and drink to sort out! I was horrified. I had to drink tea with no sugar, as did Jamie and Kevan…I know….I am surprised there wasn’t a revolt! Having recovered from this shock, no let’s call it as it is…trauma, I went to check on my rear tyre. To my mild amazement it still looked ok. Today’s ride out was a much shorter ride to the Northumbrian coast, so I decided to join in rather than just hang around locally. Rich had already headed for home on his FZ1S by the time we set off. I took up his slot as TEC and Rosco once again lead the way on his identically coloured Thundercat, thus giving our group a neat, if unintentional, symmetry. Well it was a cracking days riding. The roads were more open and sweeping as they coursed across the some of the best countryside the border country has to offer. We headed into England (good job Davey wasn’t with us!) the seven bikes neatly as one. I wasn’t ragging the bike out of junctions and corners in order to stretch out what little life was left was left in my beleaguered rear tyre. I had intended to ‘bimble’ along, but being at the back often means you have to keep up a good pace. So much for that plan. The ride had a good rhythm and a flow to it. We took the A699 that keeps the River Tweed company, passed through the famous racing town of Kelsobefore passing through Etal and Ford. The latter is a beautifully neat village I visited before many years ago, but I found the place oddly spooky, so I was glad when we just skirted past it at pace! We had a bit of a photo call at the end of somebodies rather grand driveway before then turning for Holy Island and Lindisfarne itself. It was fun listening to Jamie on his Thundercat as he cracked open the throttle for overtakes. Even at the tail of the line you could hear it plain as day! 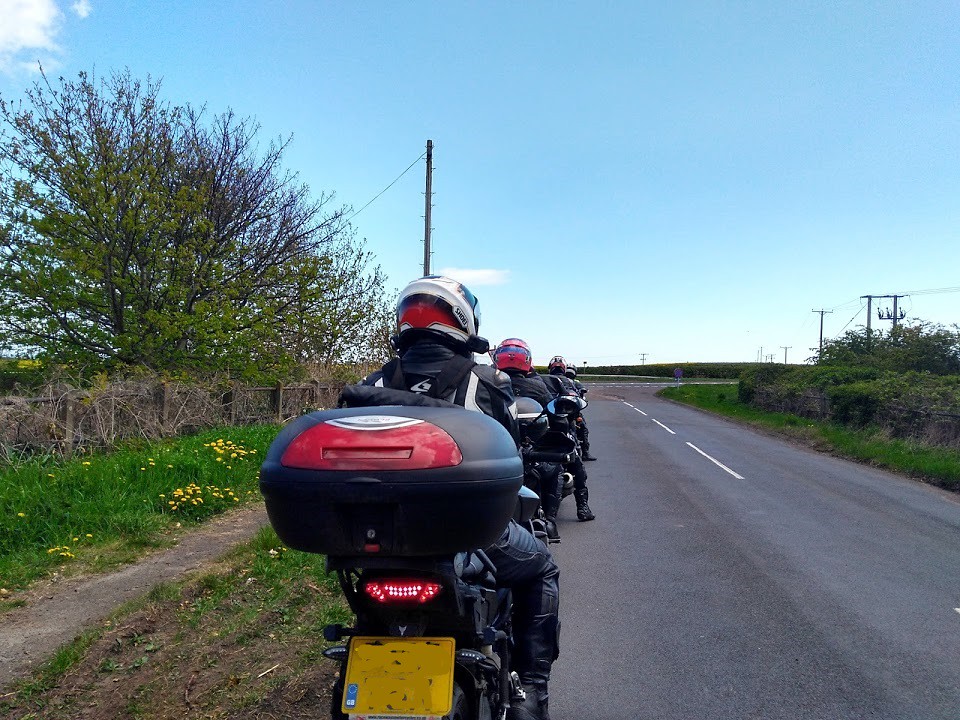 Somewhere else in Scotland... 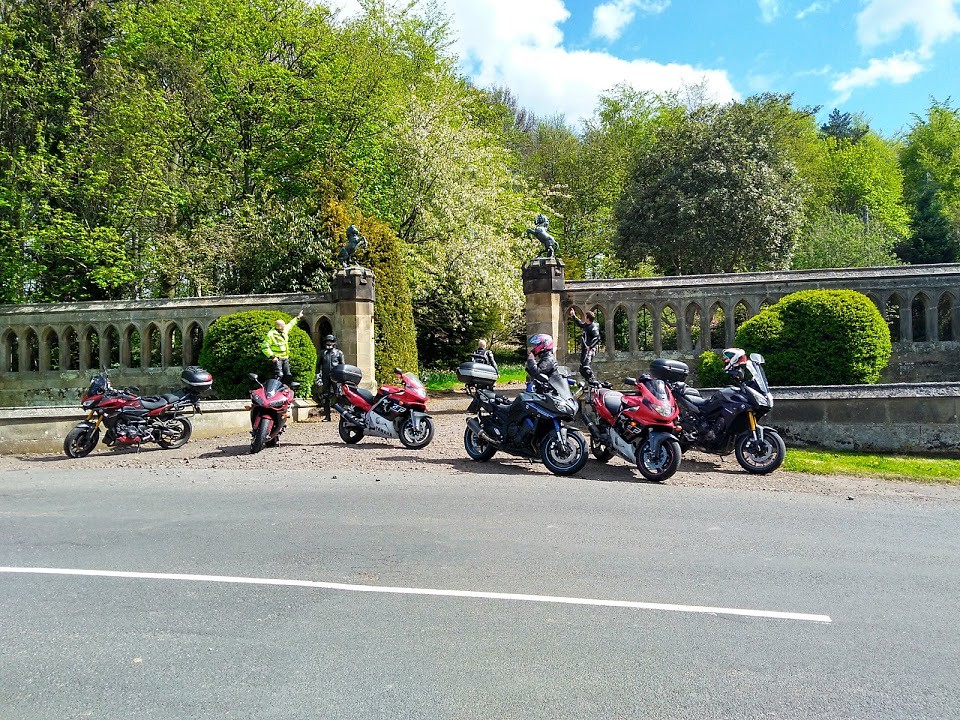 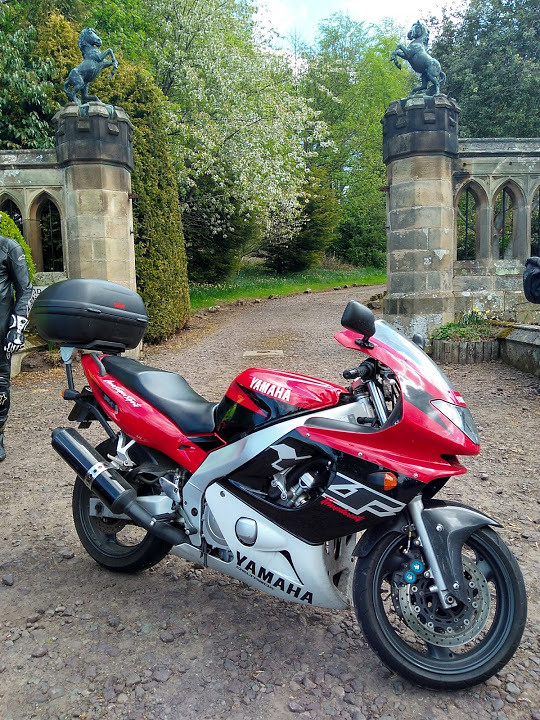 But this is the one that brings us together!

It is an odd feeling riding across a causeway, as you have to in order to reach Holy Island. Cutting across what is in effect The North sea is another new experience me and my old Thundercat have shared now. The tide was well out and the sea only visible in the far distance, but there were many pools of sea water on the road, and the high refuge shelter in the middle of the causeway served as a reminder that things do go wrong when people get their timing out and risk a crossing with the tide coming in!
Once on the island we parked up as group and could see the mystic Lindisfarne Castle in the distance. Sadly it was not looking as mystical as it could have done as it was complete encased in a huge, white plastic tent whilst under restoration! We could also see the shadowy outlines of Dunstanburgh and Bamburgh Castles, lending the backdrop a real sense of history and atmosphere. I love the Northumbrian coast and the walk out to the ruins of Dunstanburgh castle across a 2 mile headline is something you must do one day. However on this day we on a mission, a mission to find tea and cake… 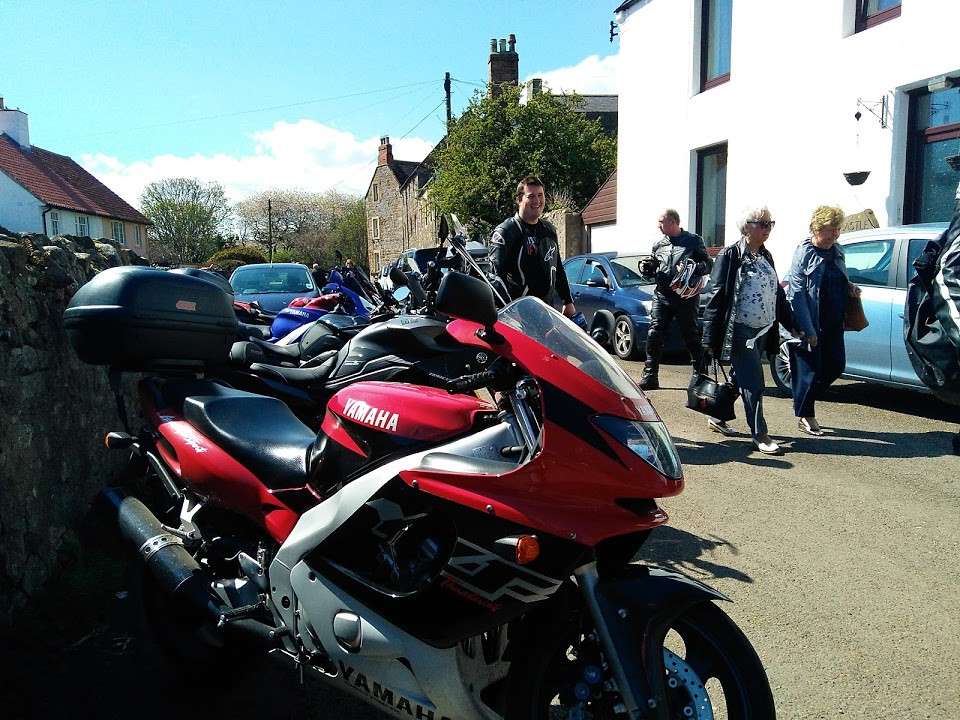 Parked up on Holy Island, having literally ridden across the sea...Thundercats walk on water! 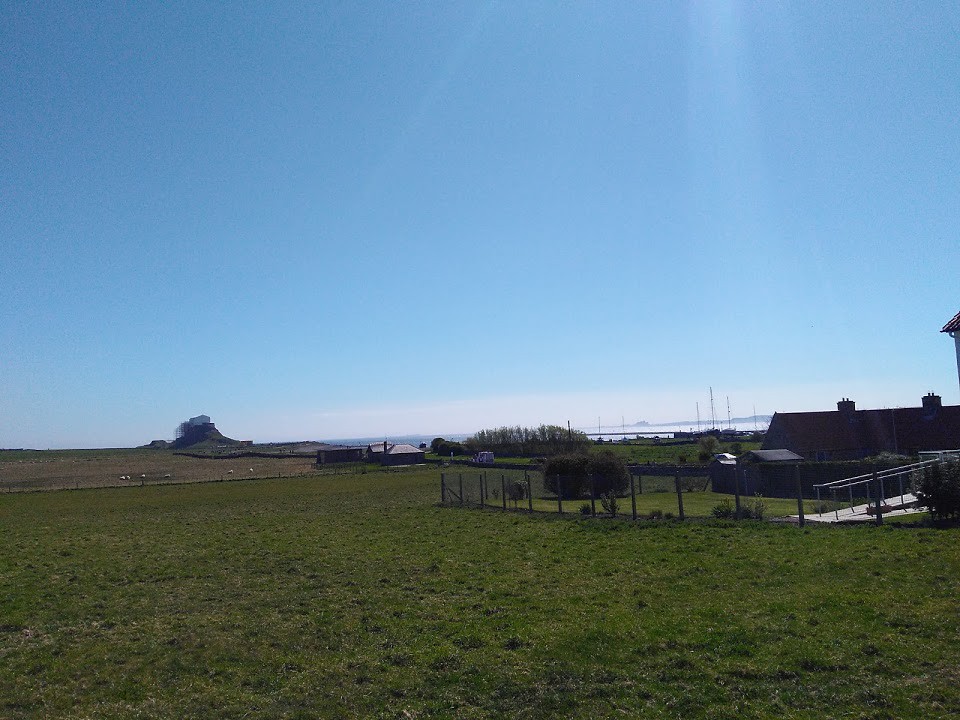 The big white tent doesn't do the castle any favours

We raided a charming little café that boasted the least efficient ordering system I have ever seen, but made up for it by supplying me with the most delicious cheese scone when I discovered they didn’t serve any salad (ahem…). They also made a lovely brew and had loads of those little sachets of sugar on the table. I say had as we promptly filled our pockets with them…the Broadmeadows sugar crisis was officially over! You can all breathe a sigh of relief… 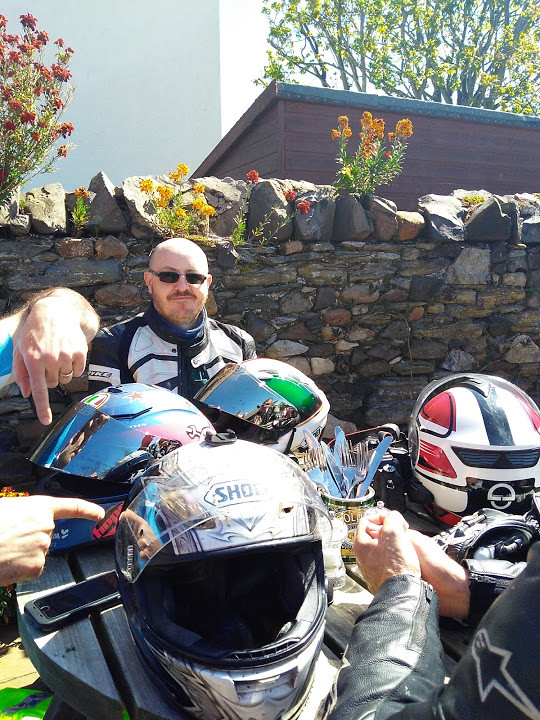 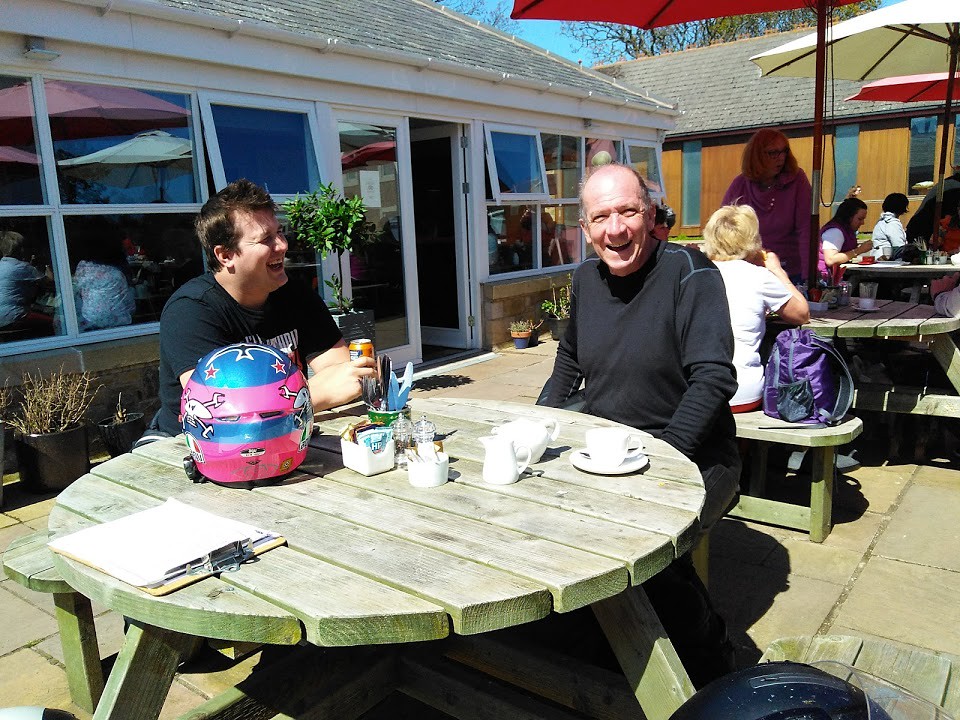 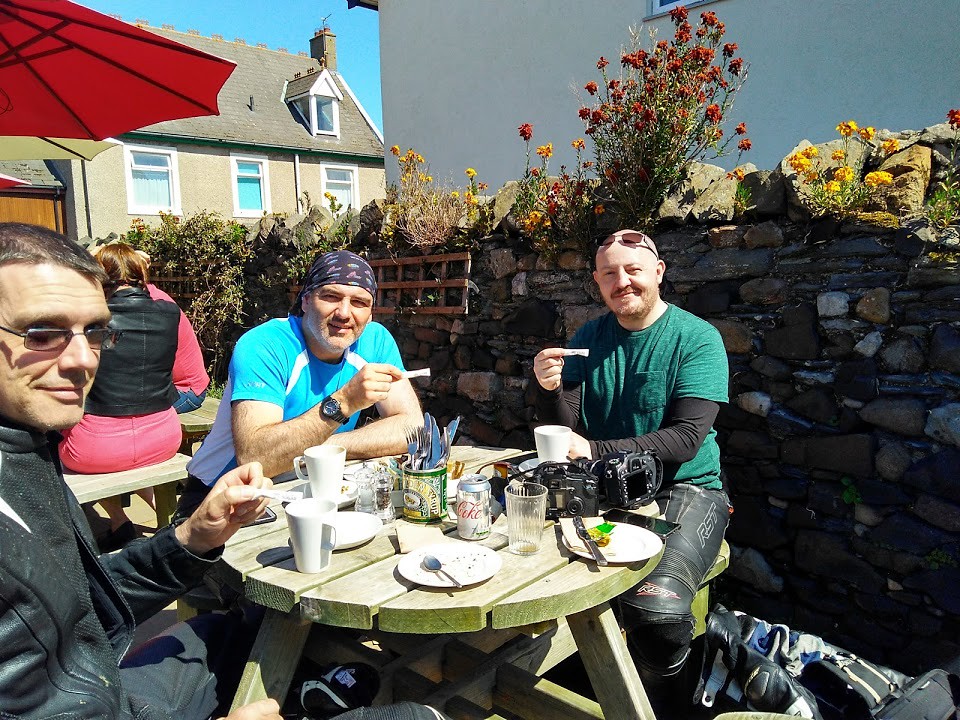 So a good ride, an atmospheric location, and the sun on our backs…I was feeling suitably chilled. What an excellent day and I was glad I had decided to come out now! The ride back was fun too as we largely retraced our steps. We tangled briefly with another group, but they were soon despatched by Rob, Rosco and Steve etc. At the back I went past a lad on a MT-09 like he was going backwards. The smirk on my face being removed as I hit a HUGE pothole just as I swept past him!
We were back at Broadmeadows by early afternoon with another 115 miles done. Meanwhile Radar’s Remarkable Recovering Radial on the back of my Thundercat looked better than it had last night. This was getting even weirder now!I don’t know what compound Michelin use, but it’s good! Steve, Ian, Gill and Rob fancied a few more miles so dashed off to St.Marys Loch for a quick blast and a cuppa. Jamie, Rosco and I decided to get some good shots of the Thundercats outside the big house and then hit the beer in the sunshine. 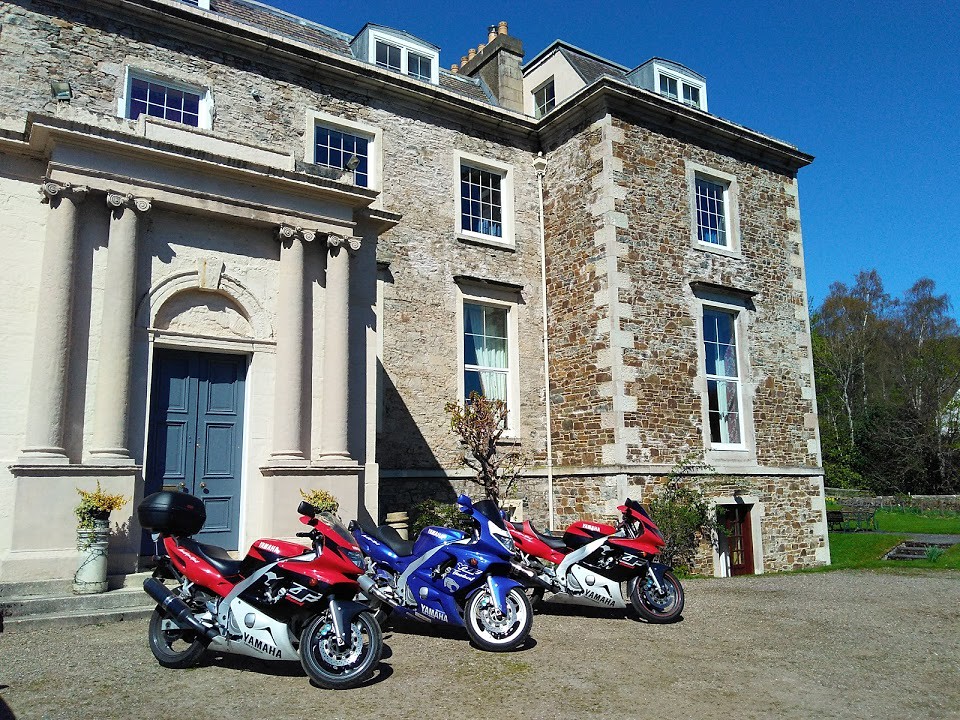 What a glorious afternoon!Rob’s car bound family returned having enjoyed themselves immensely at the nearby Bowhill House, and they also bought sugar. It was now coming out of our ears!
The break out group returned with Rob on Steve’s Tracer and Steve on Rob’s R1. Somehow in the better part of 40 years riding Steve had never tried a full on sportsbike, so Rob generously put that right. Both seemed to have enjoyed sampling something a little different from their respective norms
As afternoon turned into evening Jamie and Rebecca prepared a spectacular two meat roast dinner well worthy of our grand setting and then the drink continued to flow. 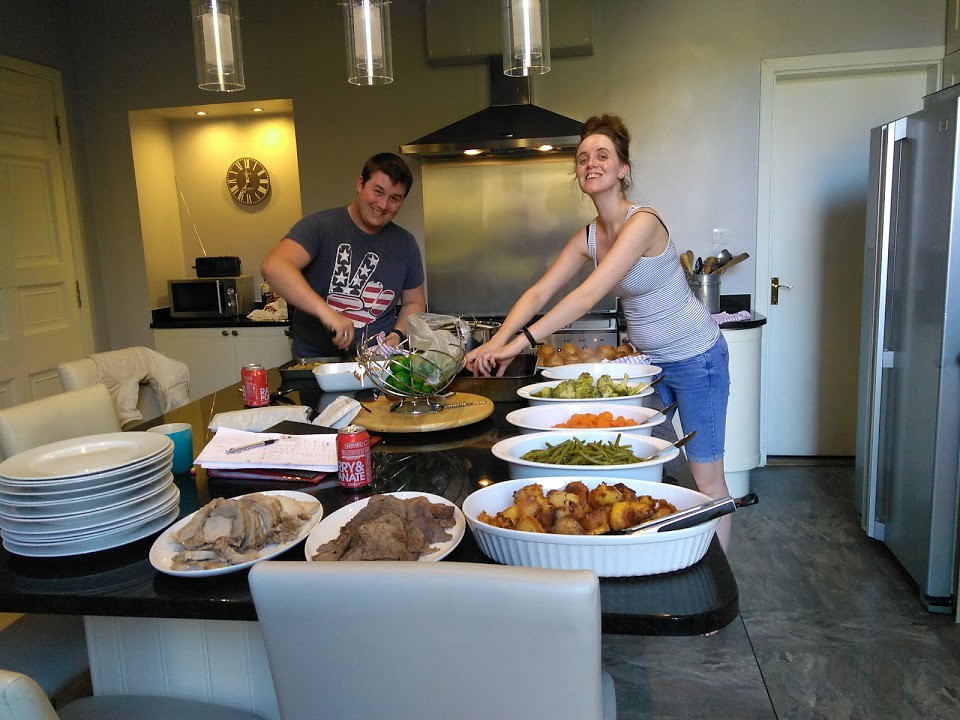 They were so good at breakfast we made them cook dinner too....

Steve was particularly ‘relaxed’ and was in top form all evening. Jamie and I also impressed Rebecca with our speedy pool playing while the eyes of the RFC (Royal Flying Corps) pilot pictured on the games room wall followed her every move! Rosco did get out the cards and dice games out again. I think I won….but was slightly perplexed as everybody kept calling me an arsehole for some reason, just because I was the only one with any cards left. People can get so jealous! I was quite ‘relaxed’ myself by this point myself it has to be said! I slept well that night…
The next morning Rosco and I combined to rustle up one last big breakfast before we packed up and headed home. I had a good steady ride home, a local on a BMW GS kept more company on the fun bits of A7. 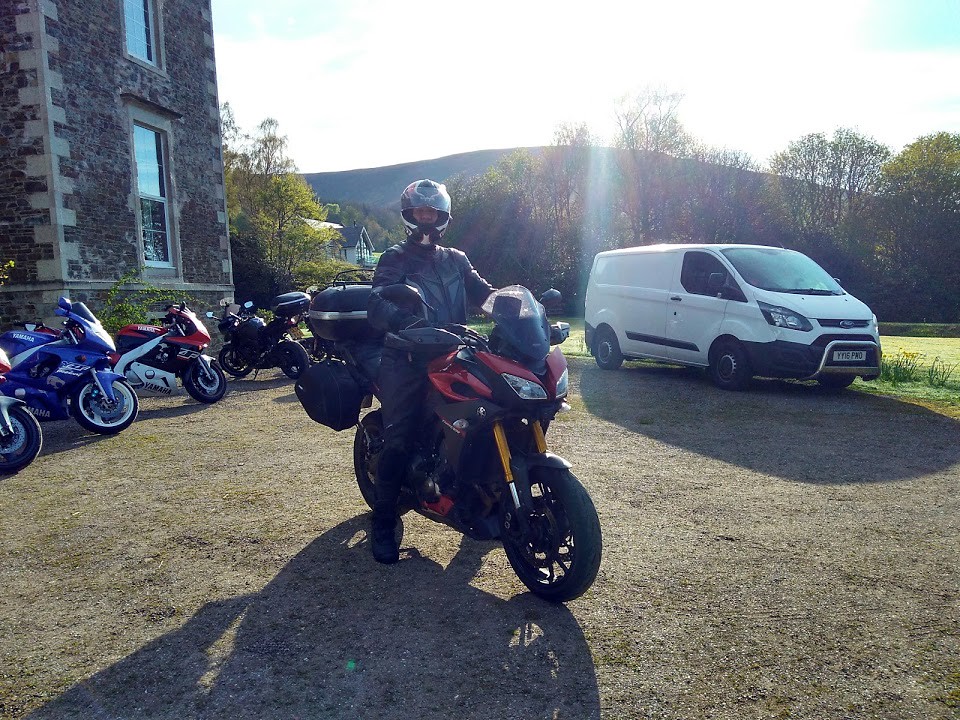 Stevecat turns for home on his hardworking Tracer

I even had a cuppa with a fellow Thundercat owner in my local biker’s café as I neared home. I rolled into my road with another 958 miles added to my worn out radial over the weekend. It now really does need replacing. 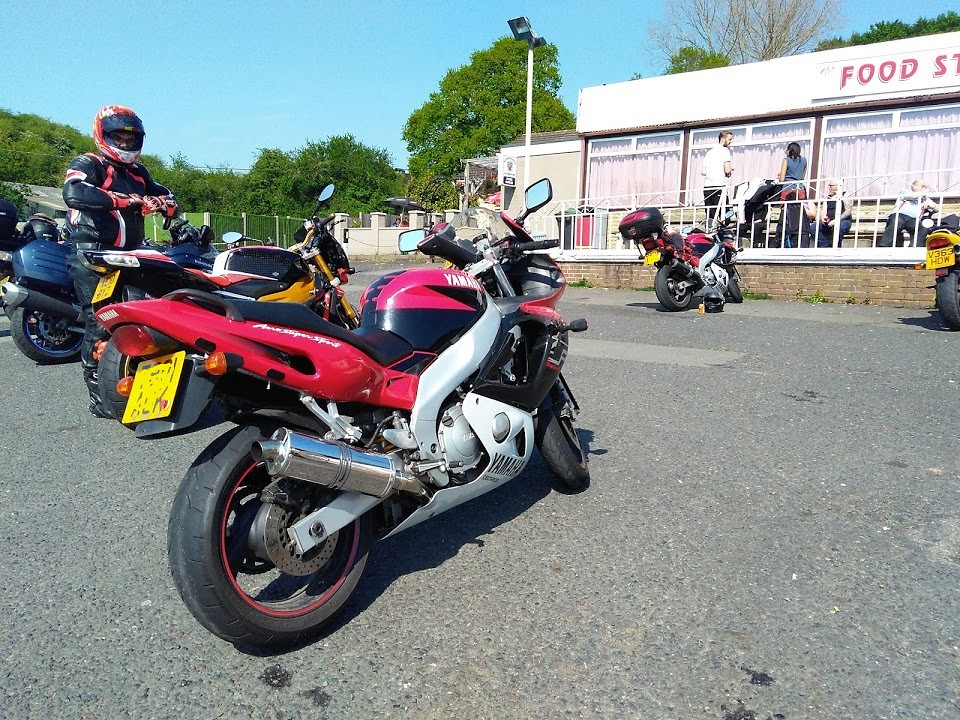 Another Thundercat and in the best colours too! 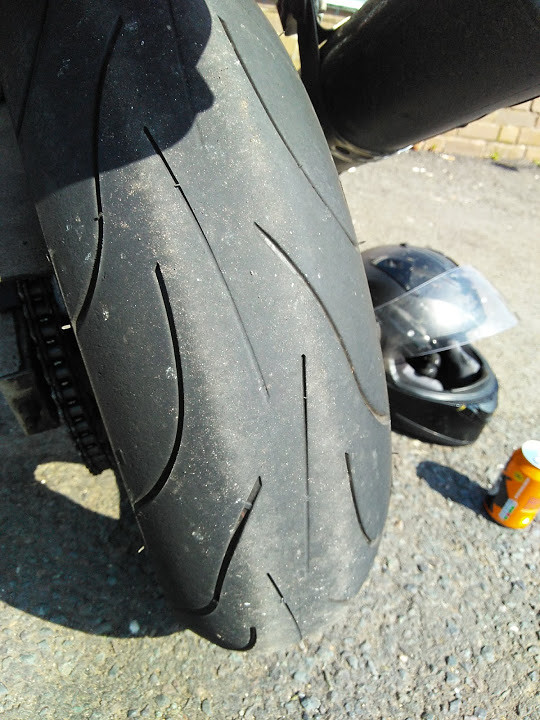 But what I can’t replace is another fantastic set of memories of a superb weekend. Thanks to all who came….and a special thank you to Rosco for sorting it all out so brilliantly….just remember the sugar next time!


Some helpful and/or interesting bits:

If you there you could of bought some sugar at least! Did I mention sugar?

Emptying my pockets after my day out on the bike yesterday and what do I fish out, a sugar sachet from Holy Island!

Looks like a great time was had!
My mate Andy runs the Ship Inn on Holy Island, I’m sure he’d have lent you a grain or two of sugar

@SteveCat wrote:Emptying my pockets after my day out on the bike yesterday and what do I fish out, a sugar sachet from Holy Island!

@robertcains wrote:Looks like a great time was had!
My mate Andy runs the Ship Inn on Holy Island, I’m sure he’d have lent you a grain or two of sugar

Cheers, come along next year!

I am sure he has a sachet or two in his bat belt, I was just pleased to finally find something Rosco DOESN'T have in his legendary topbox!