Hello,
I've owned my Thundercat (X reg) for almost 10 months now but yesterday whilst leaving work had a moment with the jerky throttle at low speed resulting in me then carrying too much speed into a bend to leave the car park and I did the wrong thing grabbing a handful of front brake!....

Needless to say as I was corning and at low'ish speed the brakes grabbed, front wheel lost grip and down the bike and I went with a fully fuelled cat landing on me and my vey unhappy right leg..... I've now damaged my fairing and a few other bits which I'm more annoyed about than anything else

Can anyone help me identify my paint colour and where in the UK I may be able to get some more from so I can do the work myself to touch up damage.....my bike is an X Reg cat, YZF600R in what looks like a burgundy / Dark Red colour, grey graphics - I think it may be Candy Apple Red?

Colour can be seen in my avatar pic - that's my bike, doesn't quite look the same now though

If you've never tried to lift a fully fuelled cat off the ground with a dead leg I can tell you it's damn hard work!, think it weights over 200KG wet - fortunately after some huffing and puffing in bike gear and 30 degree heat I remembered to lift it from the front bars which worked, phew....

Any help greatly received - for a 16yr old bike it was looking good until yesterday! - just minor panel damage in the grand scheme of things though....thanks all 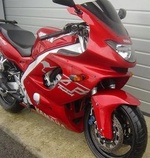 Hi, welcome to the site, sorry to hear of your incident. Hopefully you won't need to pick up a bike again, but the way I've been shown is side stand down and out of gear (unless that's the side its fallen onto), squat, back to the bike one hand on the handle bars and the other the grab rail or something you can grab at the rear which won't come off under the weight, using your legs lift up the bike. I tried this in a training session not that long after I had torn my clavicle whatever's (ACJ).

The name of the paint colour is Vivid Red Cocktail 7, probably the best place to get the paint kit - yip it a three layered paint, more like ink than paint - is RS Bike Paint

Thanks very much! - yeah hope I don't have to face picking it up off the ground again, fortunately it was relatively low speed so minor damage to me and bike.... thanks for the top tip on picking it up also and the paint colour / link - a great help.

Sorry to hear about the off. Fingers crossed none of us ever need the picking up the bike advice but it it good to know.

Looks like Steve has covered the paint query too.

I know it's a bit late now, but you might also want to think about fitting some R&G crash protectors - they may well have saved your fairing if they had been fitted.

+1 on the paint and crash bungs. You'll find touching up will stand out a bit, it really needs to be sanded back and cut in to get a match but it will never match completely. Not sure how much the paint is but you should be able to pick up a decent panel for less than £50.

What other parts do you need as me and I'm sure others on here have spares.

Thanks for the offer of spares but it just scuffs across multiple panels so I've ordered the paint and will touch them up.

My right leg was very brave (wrong place wrong time for it) and took one for the team which stopped a lot of damage to the bike, bruising not come out yet so guessing that's deep as it still feels like those dead legs your mates used to give you at school, no pain walking on it though.
Ironically I had thought about crash bungs but not got around to them yet, Jacket also now got a hole or three in it which won't help it keep the water out when the weather turns!

Cheers for the help all, especially the paint code and place to get it from and remember, when the sh!t gets real don't grab a handful of front brake!

Get yourself some Arnica if you do see the slightest bruising, works a treat.

Similar topics
» Colour Change ?
» Most Popular Thundercat Colour ?
» £1695 or offers - Thundercat For Sale (Manchester or Leeds) - Custom paint
» 2002 Thundercat finished project now up for grabs! incredible condition and fresh paint!
» What colour should I do the Cat?