Hi all! Just came across this place by accident. Good to find another forum for some exchange around the Thundercat. I´m 38 and own my bike for 8 years. Its my first bike and i dont think i could ever sell it. I do the maintenance on my own from the beginning, i know this bike quite good meanwhile and hope i can help from time to time. Btw i visited UK on my Cat in 2010, sometimes driving on the wrong side by force of habit, but i survived and it was a great ride

Hello & Welcome to the forum Chewy ,

All the way from sunny Bochum hey ? I have been there a time or two

Please do not misunderstand, but are you aware of our German sister website for the Thundercat ? You can find them HERE. A Group from them came over here to Scotland for a visit a while ago. They're a good bunch. One or two of them are also members on here as well.

After you have had a look at their forums, please do come back to us and make yourself at home here as well. Perhaps you could make the trip to visit us too

Hope you enjoy your time here.

Riding on the correct side of the road in a foreign land is easy when there is traffic around.
Myself and friends have often set off on the wrong side when there is no-one else around and the road markings just ain't helping.
Unfortunately a few have continued on the wrong side oblivious to their predicament for quite a while......not mentioning any names.

In glad you survived to tell the tale too

Welcome to the site Chewbacca

Re: driving on the wrong side.

I do that on occasion myself.

Earlier in the year I came back from a job in Hamburg and had a total brain fart approaching a roundabout at Glasgow Airport.
I couldn't recall which side of the road I was meant to be on.

Hi & welcome to the site, like you I have owned my cat for a lot of years & don't intend to ever part with it.

@ Oldcat: yes i know the german Thundercat-forum. Sometimes we met with some people from there for a ride. It usually became a bit unruly and we were lucky to not lose our driving licenses. But i didnt read that some guys from the forum visited you in Scotland, i would go for that as well

The driving in UK was quite alright after a while, my navigation system was really helpfull. But in roundabout traffic i mostly tried to go around to the right, the force of habit is strong with that one

Fortunately a bike isnt big so i managed to pass everyone coming from the front. The car drivers were like...

i think they knew i´m from the continent

I was a truck driver these days, i was driving up to 700km every day and it was hard to break the automatism i got behind the wheel with years. At the last day in Dover i almost ended up on a bonnet of someone, just few minutes after this pic (sorry for the quality) 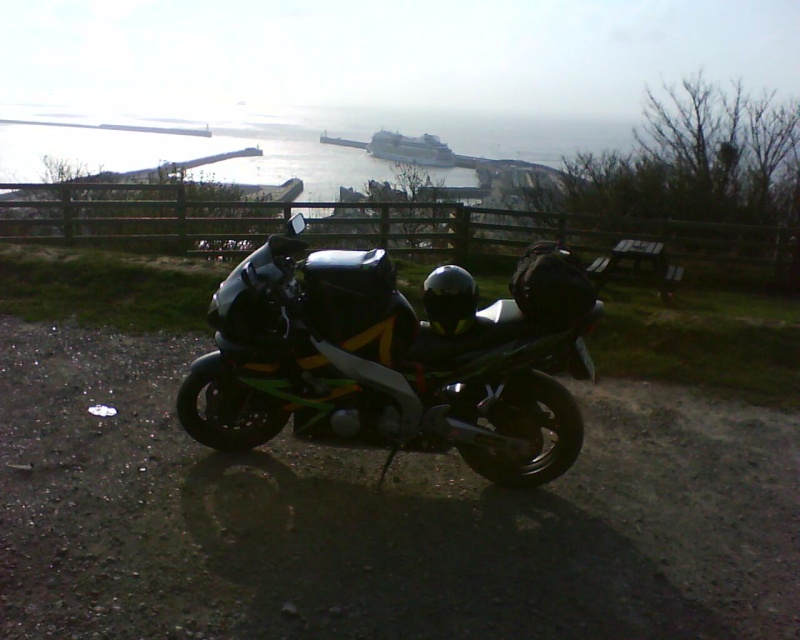 Strangely it was easier to drive a car (from a friend with the wheel on the right side) as a motorcycle. I realized that its not that simple just to switch to the other side

Chewbacca wrote:
Strangely it was easier to drive a car (from a friend with the wheel on the right side) as a motorcycle.

How many times did you grab fresh air when reaching for your seat belt?

I did that every morning and every night for the best part of a week.

Several times ofcourse, as well as hitting the right door when trying to shift gears