Got knocked off yesterday morning on the way into work, long story short a big van decided to suddenly stop in the road and start reversing as he's missed his turning. I beeped (as that was all I could do) but he kept coming (even after he'd hit me) and started to mount the pan, at which point I dived out of the way.

I escaped without injury but the pan is likely to be a total loss, mostly because it's 20 years old. Just waiting for an engineer to come out and assess the damage. Now waiting in anticipation for the courtesy bike to turn up (don't know what I'm getting yet, but odly excited about it).

The chap quickly admitted liability and there were plenty of witnesses, so fingers crossed the claim will go through quickly. If it's written off I shall be looking at getting something a bit lighter and more economical and will probably break the pan, or repair it and sell it, who knows!

Glad to hear you are ok Paul, you wanted to sell it anyway so job done!

Bummer. Glad you're OK tho' 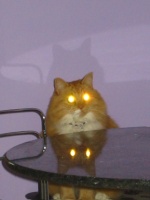 As said so long as you are ok then it's all that matters.

Glad you are OK bud. Very similar thing happened to a mate of mine years ago in Norwich.

Glad you are ok.

Hope the insurance sorts everything out for you.

Not nice to hear Paul, hopefully the ins will be less of an ordeal.

You don't make it easy for me do you, I'm going to have to do some serious miles quickly to give you that report back

I'm surprised the Pan didn't write the van off haha, seriously glad you're okay Paul it could've been a lot worse, bikes are replaceable, little frances not so much!!

Glad you're ok, bummer about the bike though matey.

That's why I am insured for 3rd Party F&T on the BlackBird, it's 17 years old and would be written off if I even cracked a single panel :(

Bad news that Paul but a least your ok hope it gets sorted in time for the new season.
Cheers
Mark

Status :
Number of posts : 361
Hobbies : roofer/titting about
Humour : if iam put on life support machine turn it off and on again see if that works
Registration date : 2011-04-19

Important thing is you're okay buddy. Bike can be replaced, unlike human body parts, they're a bit harder to come by.
Was this the driver btw

Thanks for the kind words guys.

Stevecat, the boss won't allow me to buy a brand new bike anyway so no rush

Snowcat, surprisingly there wasn't a scratch on the van, mostly because the back end was high it just mounted the Pan :( but yes, you would have thought so. The Pan went down on its side hard, but that didn't do any damage, so it's certainly designed to take a hit.

From an insurance point of view, it was all very confusing at first as I was advised to contact my insurance as I was so far away from home and the third party's were unable to help me at first until the van driver reported the incident. My insurer (Hastings) were bloody useless and it certainly wasn't worth the fully comp policy. I ended up cancelling the claim and pushing the third party's to hurry up. Took the whole day to get recovered etc. but got there in the end.

Got an engineer coming out on Tuesday to assess the pan which is at home with me. Just awaiting delivery of the courtesy bike now which should be here this afternoon... unfortunately it's a bandit 1250 :( with no luggage. Not what I'd call like for like!

Thought I'd give an update!

The Pan has been officially written off, although there is a silver lining! The insurance valued it at £3.5k, I've decided to keep it so they'll be giving me just over £2.5k which is a good result as I have already fixed it for under £100

and rode her to work this morning!

Been on a bit of a shopping spree and will be making some mods to the old girl such as fitting auxiliary lights so I can blind everyone who doesn't see me (ironic?)

Not so bad ay?

That's a win right there! Glad it's all worked out Paul

What insurance company are you with?

Got to love a happy ending!!

G;ad to hear it got sorted Paul

Great ending! Does this mean the flying sofa will be at BC?

It certainly does Nick!

Wooster, it was the third party's insurance company I claimed off.. I'm with Hastings who are useless and I won't be using them again.

It certainly is, although they changed it massively as I didn't ask them about the suspension as I knew that wasn't the problem. Plus they gave me a completely different answer personally. Oh well.

Journalism, why let the facts get in the way of a good story!!

Way to go Paul, it appears that I too am now published, again they worded my question slightly differently and the advice wasn't exactly what I wanted to hear but hey I won a prize and they will be featuring it as a future Resto if I can do a good enough job of it!!

At least you got a prize!!!