We are finally back. Terry (Oldcat), Bea (Phoenix) and myself have been down to Frank (Copout) and Lynn's (Switchblade) place in France for a couple of weeks.

It's been an eventful trip so here are some pictures and words about the holiday.

It all started 2 weeks ago today 9 July when Tel, Bea and I met up in Folkestone, this is Tel and Bea arriving 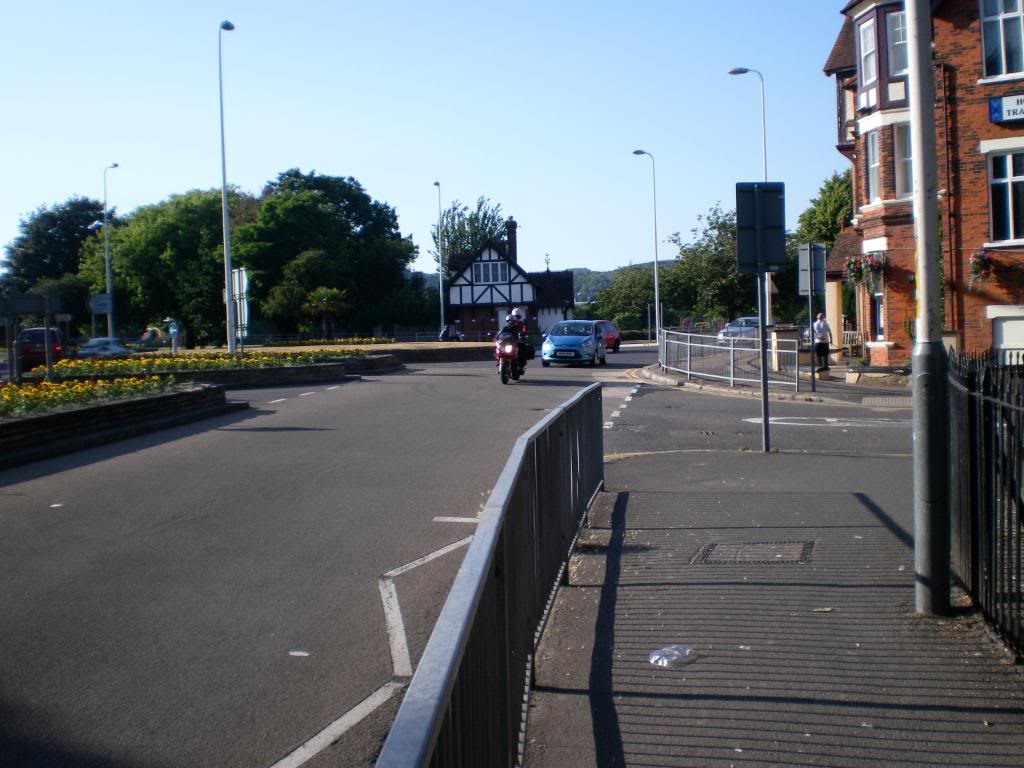 Sunday morning we crossed over to France via Eurotunnel, got there slightly late due to talkative host at the B&B then there was a delay of an hour so we got to France quite late. I had plotted quite a challenging but different route down to our overnight stop in Chateauroux. Unfortunately my route, although very scenic and taking in some beautiful countryside and villages, was quite time consuming. We did stop here for lunch though 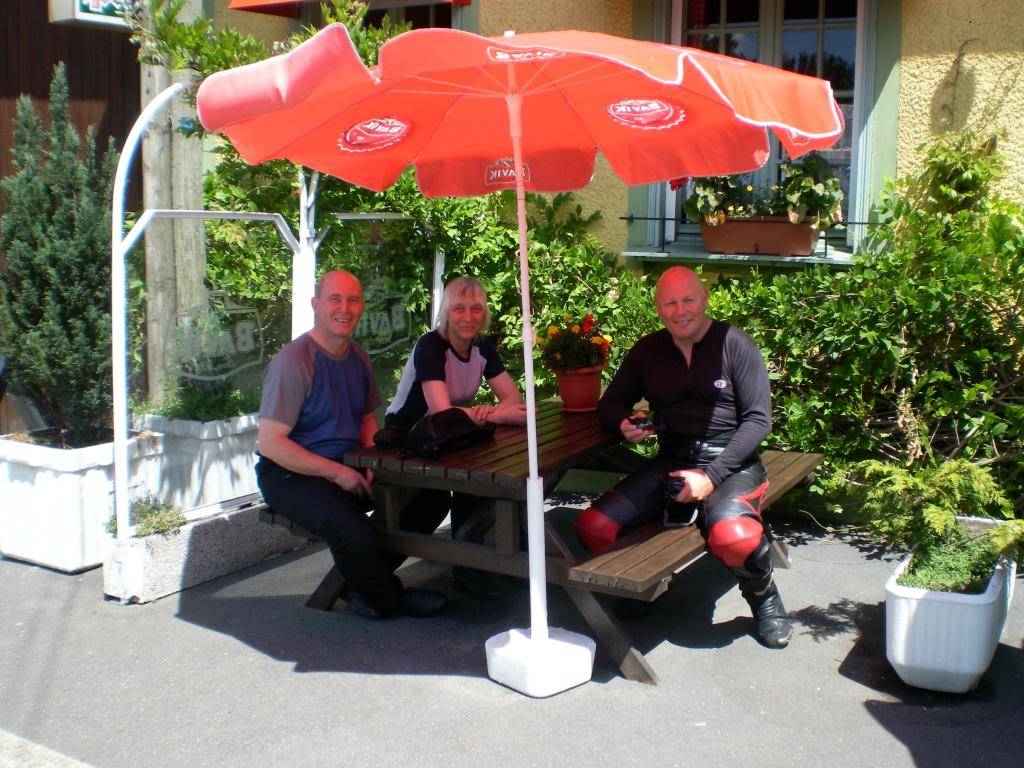 Because of the route plotted we didn't arrive at our overnight hotel until 9pm, knackered, thirsty, hungry and tired. Check in, quick shower and off for a meal, luckily there were plenty of places to choose from and all still open. A few beers were obviously taken. Got to watch the post match world cup celebrations as well.

Overnight we had an almighty thunderstorm and woke up the next morning to find it still lingering. Off we set (route duly changed, I'd learnt my lesson), straight into another thunderstorm. Waterproofs on, pannier covers on, it was yuck. It rained until lunchtime and then brightened up and got quite hot. Later that afternoon we met Frank and Lynn who had ridden part way up to meet us. Arrived at Frank and Lynn's at about 6pm. 975 odd miles after leaving Exeter (almost exactly the same from Terry who travelled down from North of Nottingham).

Needless to say Tuesday was spend recuperating, apart from a Fete taking place that evening in the local village of Trie sur Baize. A fair amount of wine was taken along with some food (a steak like you have never seen). Lynn and I did our best Strictly Come Dancing routines in front of the locals in the middle of the town square. Fortunately no photos exist of this rare happening.

Thursday, we all get on our bikes and head off to Millau for a couple of days. On the way we stop in a fantastic village/town called Albi for lunch. There was a rather small and quaint church, take a look - 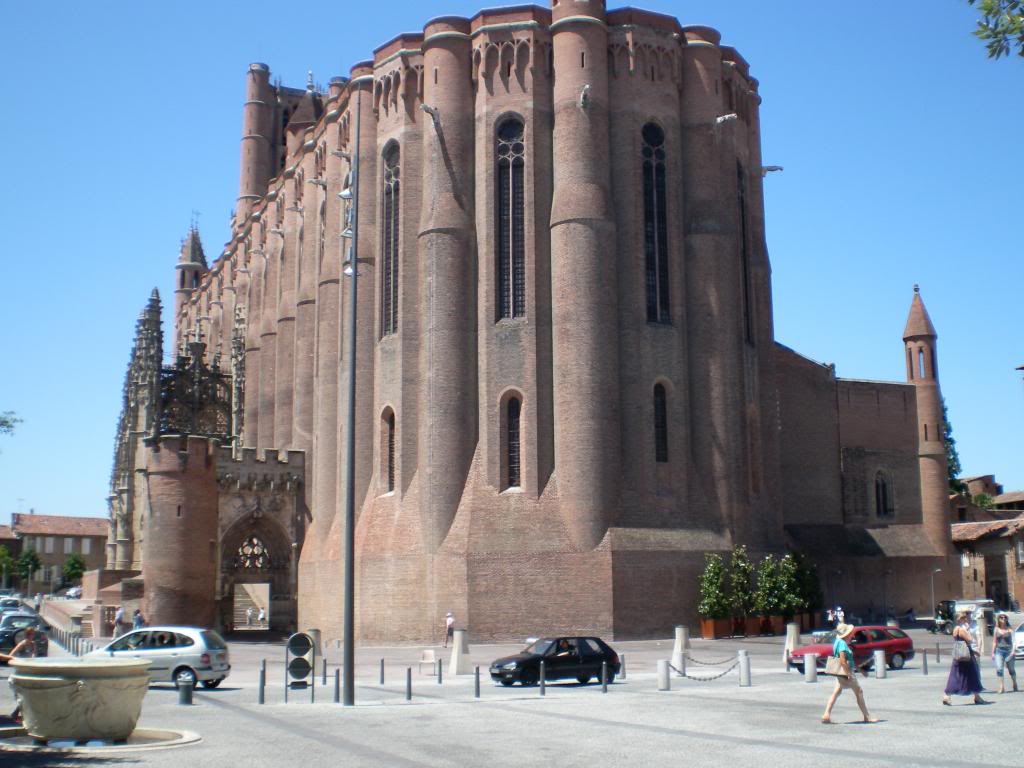 Then off to Millau Viaduct, reputedly the tallest bridge in the world (I think). It is certainly a fantastic structure 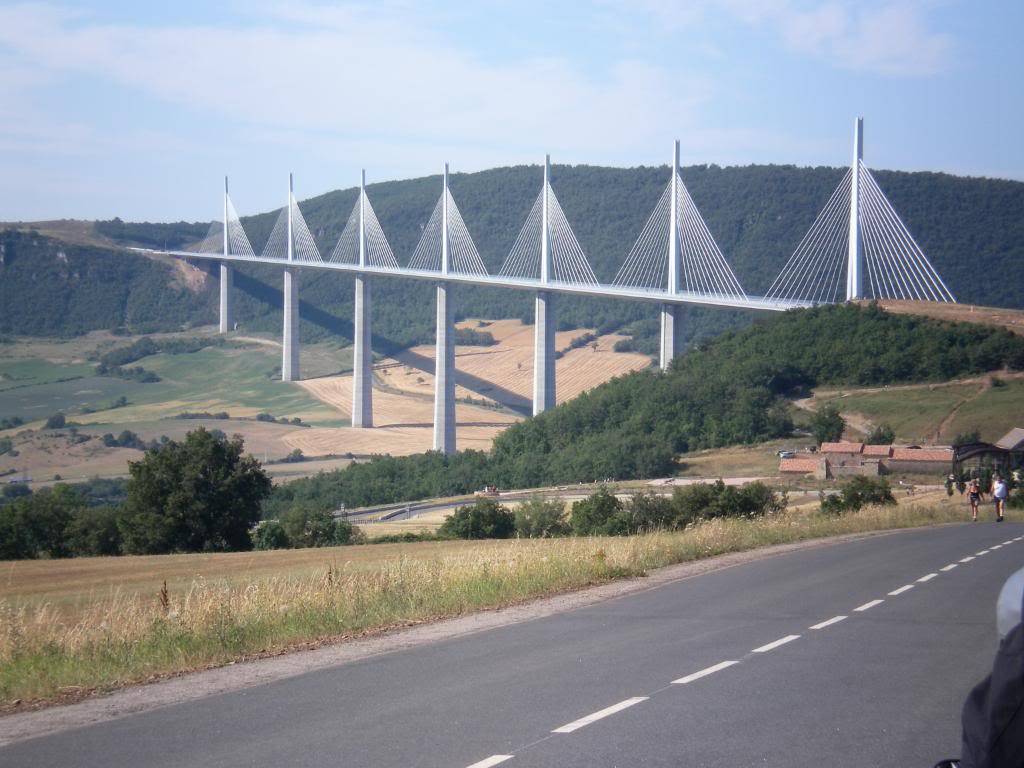 It was here that my bike started playing up. The battery mysteriously seemed to die on me. We stayed overnight in Millau and after an uncomfortably hot night in a not so good hotel, the next morning the battery was dead and we had to bump start the bike. The problem persisted for the rest of the holiday, the battery going flat but only when we were not travelling particularly quickly. If we were travelling fast then the alternator seemed to get enough charge in the battery. Luckily it got me back ok but it was a worry.

Anyway, the rest of the holiday was spent (worrying about the bike obviously) sometimes up in the mountains 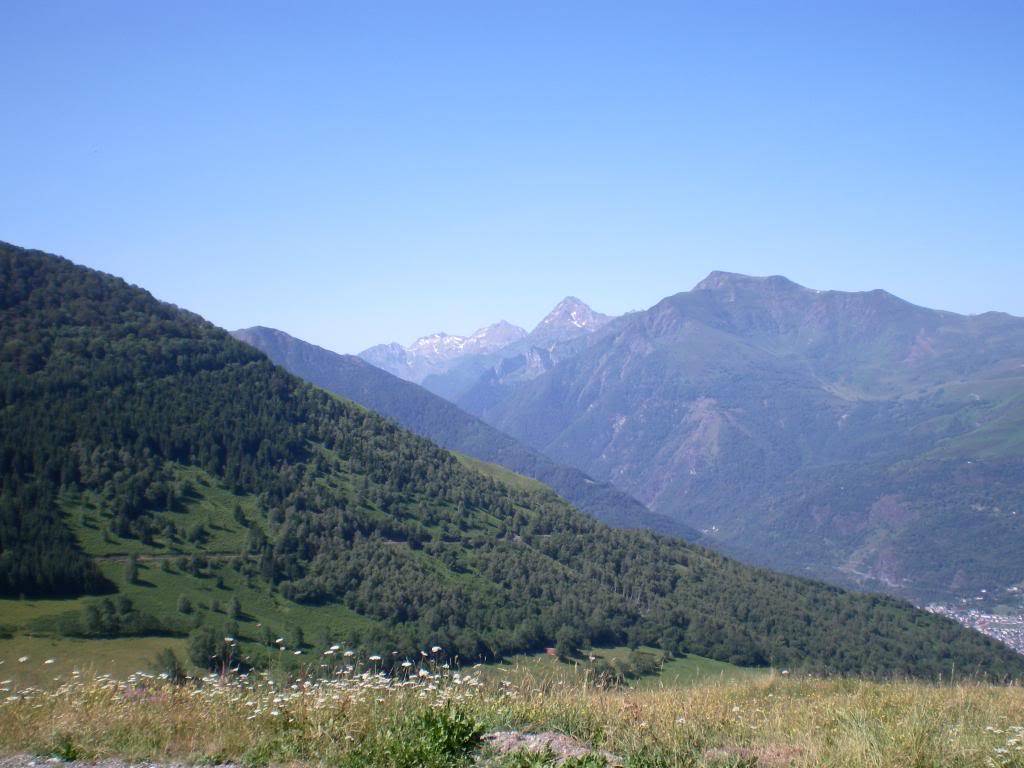 or generally eating and drinking. One night we were in Tarbes having a meal, sat outside, like you do. I noticed a group of people sit at a table adjacent to us and I'm looking at this chap thinking "I know you from somewhere". Then it clicked and I asked Frank, "isn't that Chris Boardman". Yes it was, Olympic Gold Medallist Chris Boardman. He was in France commentating on the Tour de France for ITV4. Frank spoke to him briefly as he went into the restaurant and he stopped and had a quick chat with us before he left. It's the closest I've been to an Olympic Gold Medallist and no I'm not starstruck. Lol. Sadly, no pictures again.

Eventually the holiday had to come to an end and we had to take our leave of Frank and Lynn last Thursday morning. There was an almight Thunderstorm the night before (recurring theme here) and it was chucking down with rain when we left. Again it brightened up by lunchtime. Overnighted in Bourges this time and then made our way to Calais on the Friday.

We were running a bit late getting to the Tunnel crossing. With an hour and ten minutes to go until our final check we still had just over 100 miles to go. Ahem, we made it with seconds to spare.

Overnight in Folkestone again and then home by lunchtime today (Saturday). In total about 2500 miles done. Superb weather, great company, fantastic hosts, good food and drink, stupid bike. All in all a great 2 weeks.

If you want to see all my pictures they are here.

[You must be registered and logged in to see this link.] wrote:our overnight stop in Chateauroux.

I live around 50km from there! Wish I had have known, I'd have popped up to say hello.

As you found out in your journey down, it takes ages to get anywhere if you're going to take the scenic route. France is big, real big, and if you want to cross the country then, sadly, autoroutes are the way to go - as tedious as they are.

Nice one TCB - Thanks for sharing.

looks and sounds like you had a great time, i went over the millau viaduct this summer! very impressive!!