hi,
My lovely cat vibrates quite alot espcially between 5 & 6000 rpm and it gives me and pillion (usually my wife) pins and needles in our hands . If anyone has any suggestions what i might be able to do to help this matter will be greatly appreciated .

ooh i have to ask because i've just seen where you're from and you may be the person that has been confusing me, Andyb and my oh who keeps thinking its me lol - where you from South Lincolnshire? and i don't suppose you were at Boston Bike Night last night were you only a chap was there on a cat like mine.

We keep seeing a red/white/black one round Boston/Coningsby. (and depending where you are i can recommend a reasonable place to get your carbs done

As Suzie said, where in lincs are you?

Welcome to the forum

Thanks for the responce . I am from spalding . I was at the boston bike night last night . I dont normally ride boston way . I normally ride out around Bourne/stamford area . Any suggestions as to where is good for bike maintanence etc would be great thanks .

bet that was you then lol I'm just down the road from you at Sutterton- if Boston isn't too far for you then give Julian a call - its J & B motorcycles on Redstone Industrial Estate so its before you get into Boston - 01205 353767 oh and if you do tell them Suzie said! Stewart loves working on my thundercat. I got my carbs done there earlier in the year at the same time as the service and mot and i can't remember what the price for it all was now (its on here somewhere!) but it was a lot lower than i expected and everyone i mentioned to thought it was on the cheap side. They really are good there and look after their customers (plus its always nice to go in and gaze longingly at the Arais and other gear!) The other good thing about him is just because he has it doesn't mean he'll sell it - times i've been in and said should i have one of them and he's said well i'll sell you one but personally i wouldn't put one on my bike/use it on my lid but people do so i stock it. Some people are too darn honest.
Have you had your bike long?
There's also a small place at Sleaford that i used once that was recommended to me by a plod and they were good too but that was before i really discovered Julians they had a stand at the bike night so you may have seen them. He'd give you an idea on prices of anything if he could when you rang but they're really reasonable.

And for anyone else that may be looking for any new gear check out http://www.brandedbiker.co.uk he was doing free delivery don't know if he still is but i'll give it a plug anyway as he's my mate and looks after me.

Thanks for that i will defo give them a ring . I remember going there a couple of times with trev from ace training when i was learning . I have had the cat for about three years since i passed my test . Will put a post up to let all know the outcome . Thanks again .

see you've taken your bike in then - it had its nose up Ezzy's bum!

Hahahaha so have a lot of things this week ---- oo'eer missus!! 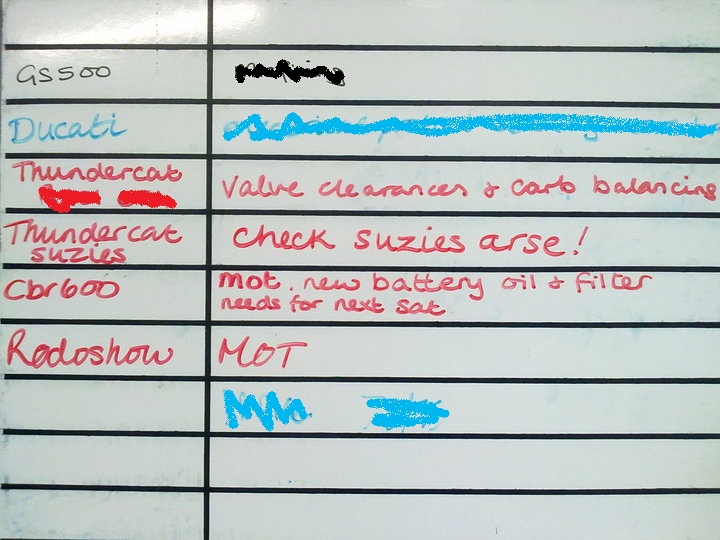 It is probably carb balance