Should I get a cat?

Should I get a cat?

Hi, hope this is the right place to post this!

I passed my DAS about a year ago and hopped straight onto a SV650s (I had a 100 mile round trip commute each day). I wasn't keen on the v-twin so when I moved closer to work I got a CB-1 (400cc). I enjoy that but physically it's not really big enough (I'm 6ft and 14 stone) so started considering what's out there.

I don't want a GSX-R or similar just yet, and my brother suggested either a CBR600F or Thundercat might fit the bill. I prefer the look of the Thundercat. Obviously most here will be biased but I'd be interested to hear your points of view. Is there anything else which might suit me better? Is the cat WAY better than a CBR? What should I look out for if I start hunting for a cat? (I'm thinking ~£1500)

Any advice would be appreciated!

Both are very good bikes without big failings :idea:
The thundercat is not so numerous - so i prefer this exclusiveness

I too have had both, I have to say that I prefer the cat

Test ride them both and see what you think

I've really only posted to say hello! I've not had both - she's my first bike - i'm a midget - i love her but i'm biased and have nothing to compare it with - but like Toni kinda said - whilst there are a few of them about i like the fact that there's not a load about

and i think they looked nicer - all i can say is everyone thats seen mine has always had good something to say about them.

Should you buy a Thundercat

. Well as you say we might be a bit bias

There are many write ups on both the CBR and the Cat, you'll find them in the MCN site if you use their search engine.

The Cat was introduced as a rival to the then (1996) CBR model. Remember it depends on which CBR you would compare the cat to as the Honda was a constantly evolving bike, the cat stayed as was designed and released in 96 to it's finish in 03 (later outside Europe).

The Thundercat is an extremely capable machine and stands up well (I would say over and above, bias again

) against it's release year rivals of the CBR600, ZZR600, Bandit 600 and GXF600 and others.
It's not the sharpest of sports bikes (which it was originally released as) out there but it surprises lots of the true sporty 600 riders with it's abillity to keep up. True it doesn't accelerate as fast as the sporty ones but top speed (if you're interested in such things) was (is) faster than the R6 of that time @ 150mph. How much faster do you want to go ?

The Cat is an exellent touring tool. With a comfy seat and a relaxing seating position when reaching for the bars. The 19 ltr fuel tank affords very good range (one of the cats many strong points) @ an average of 175 to 180 miles to the reserve light coming on. You then have approx 4 ltrs as reserve to look for a fuel stop (guestimate 35 miles).
There is plenty of room for a pillion and reports from them is that it's comfy enough for no numb bum between fuel stops. Luggage space for touring is also plentyfull.

In short The Cat is an exellent all rounder. Good for weekend scratching, a perfect commute during the week and as a tourer for that European biking trip you've always been tempted to do.

Things to look out for when searching for a cat ? Well aside from all the usual things when finding a "new" used machine, specific to the cat are two major things really.
1. The rear shock absorber. Make sure it's not seized or that it's not caput in so far as it sags making the bike wallow in corners.
&
2. Second gear is in order. On your test ride (and you do want one), select second gear and wack open the throttle (be carefull !), if (s)he jumps out of gear walk away from the bike. Repairing a slipping or broken 2nd gear means a complete engine out and strip. Very expensive and not what you want to be doing with a bike you've just bought.

The second gear thing is not as common as non cat owners would have you believe , but non the less you need to be aware it does exist in a rare few bikes.

What else might suit you ? Well that's horses for courses mate. It depends so much on your likes, needs and budget. But how about a Fazer Thou , Bandit 1200 or if you can reach to a bit more money a CBF 1000 which is very cat like in it's performance.

Hope that helps and you find the right bike for you

Hi & welcome tel covered some excellent points. I will just add that i am 6foot & just over 14
stone & the cat fits me perfectly & comfortably.

Deffo agree with the above points. As another bit of data, I'm a "larger gentleman"

is ideal for me. I used to have a 955 Triumph Sprint, huuuuuuge big bike but to be honest no more comfortable than the cat

Cheers guys, that definitely gives me some food for thought.

Mostly confirmed what I was thinking to be honest; I had considered a Fazer or a Bandit 600 but wanted something a bit more sporty (without going to a sports bike... is that a contradiction???).

Glad to hear that the 2 issues I'd read about are the only ones to be looking out for. I think I'm set on a Thundercat, I do like the look of it more than other similar bikes. All that's left now is to sell my CB-1 and wait for the right bike! (I think it will have to be a blue one).

Are you suggesting that whether I buy a '97 model or a '01 model doesn't make much difference in what bike I get? It would be good to know if the mileage/condition plays a much bigger factor than the actual age of the bike, those are the real gems that I'm looking for

personally I'd look for condition over age, as they're mechanically the same. rather an old minter than a slightly-less-old dog!

mine was from a non-yam dealer -previous owner traded it in for a brand new big KTM - and was fairly tidy. 1999 T reg, turned out to be a grey US import from DK Motorcycles, moderate mileage (about 23k i think), one owner from new, and a fairly immaculate set of service history. had done less than 2k miles in two years and had still had two services in that time! cost me about £1700, maybe slightly more than it's worth but i'm happy.

(edit: bit of a thread hijack but noticed you're in Swindon. I'm in Marlborough every weekend and moving down soon, fancy a George Whites breakfast and a blast out somewhere once the weather perks up?)

bm1957 wrote:I think it will have to be a blue one

Best colour of all

I think there will be no clear answer for that.

Just for you to know, we have some cats that had reached the 100000 km (about 62000 miles) mark without big problems :idea:
I think it depends on the complete situation, age, mileage and the treatment of the former riders...

I'd go for condition, bonus on mileage.

They can, like many bikes I guess, have a tendency to rust/corrode, so give it a good looking over. Can give an idea of how well it has been looked after.

To answer the question - yes, get a 'cat!

It was my first bike and I liked it so much I hung on to it for 4 years - some folk can't bear to part company for longer than that.

Yes, we're biased, but we have good reasons to be :whoop:

See you at the next ride out?

greencat wrote:Yes, we're biased, but we have good reasons to be

There´s nothing to add.

There´s nothing to add.

greencat wrote:To answer the question - yes, get a 'cat!
See you at the next ride out?

That's the plan. Only ever ridden solo so far but plan to change that. Any news on the Cotswold Ride that was suggested before xmas on here? Would be perfect since I'm in Swindon!

Had my Thundercat 10 years which I think says it all really. Cracking bike

Radar wrote:Had my Thundercat 10 years which I think says it all really. Cracking bike

I do like the red ones but I still have the kit I bought with my blue SV650 so I think that makes my mind up for me!

Radar wrote:Had my Thundercat 10 years which I think says it all really. Cracking bike

I do like the red ones but I still have the kit I bought with my blue SV650 so I think that makes my mind up for me!

Sounds like a plan. I took my Cat around Europe in 2007, I think there is a review of it on this site somewhere. I went around with lads on two R1's, two Millies a Blade and a ZX9R. Had an amazing time, 2300 miles in 10 days. The Cat loved it. 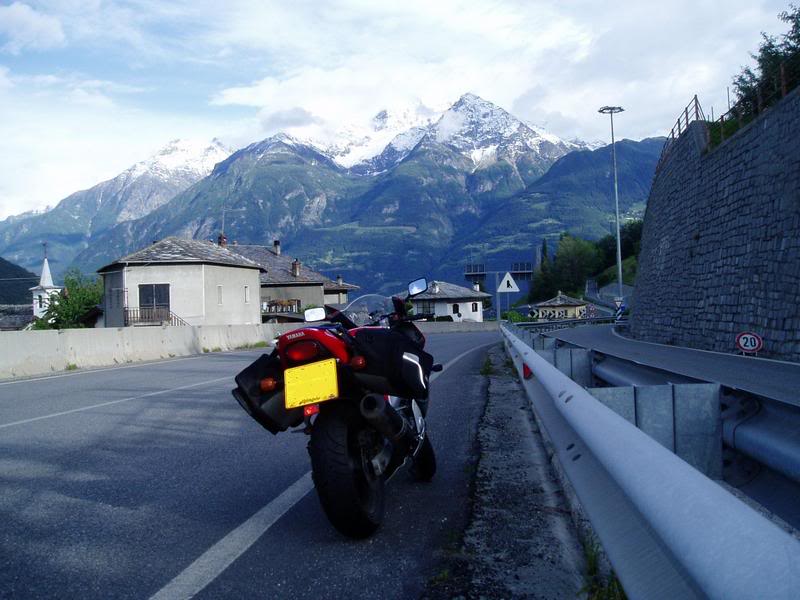 Hope you enjoy yours as much as I have mine

Beautiful part of the world, woke up with that as my view when i stayed there.

ellie wrote:Beautiful part of the world, woke up with that as my view when i stayed there.

I stayed in a little hotel for one night and that was my view too. Amazing place.