After an excellent evening and a decent nights kip I awoke to the all too familiar sound of rain pounding against the window of our room. Not good. 'It will clear by the time we had had breakfast' I optimistically reassured myself.
Over a hearty breakfast Chris, Jamie and I discussed the realities of egg eating...what we are actually doing is consuming the unborn off spring of a poor chicken that has variously been boiled, beaten or fried to death. We philosophised that we may have just removed the chicken equivalent of Einstein from the world. Man, maybe that ale last night was stronger than I thought! An interesting to start to the day...
Once outside I was somewhat dismayed, if not surprised, to discover that we were still in grip of some pretty persistent precipitation. In other words, it was pissing down...
So once Terry (aka Captain Manwearing) had rocked up with the platoon of Dad's Army in tow we mounted our bikes and tucked in behind Nick on his mighty Genesis for the ride out. 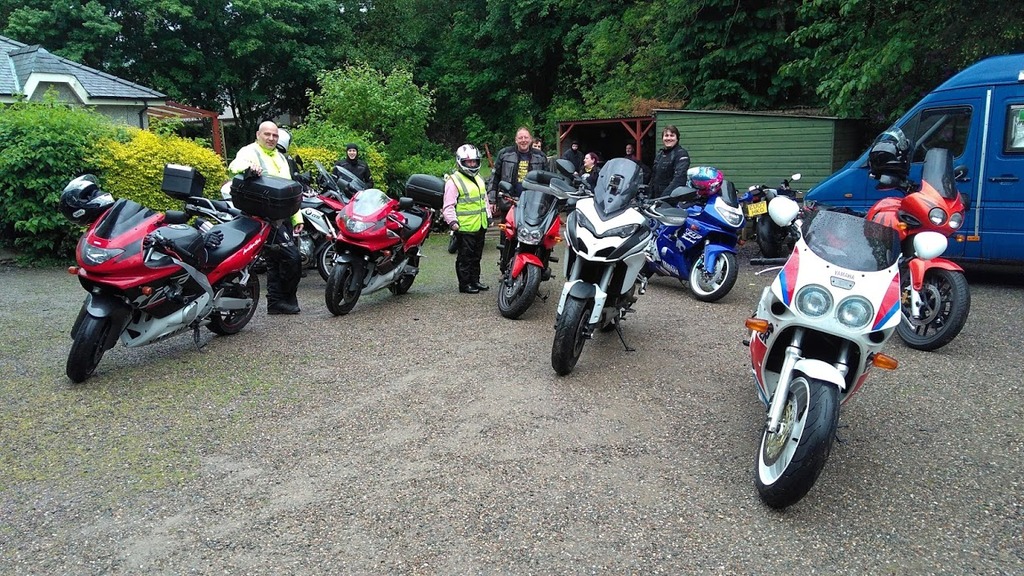 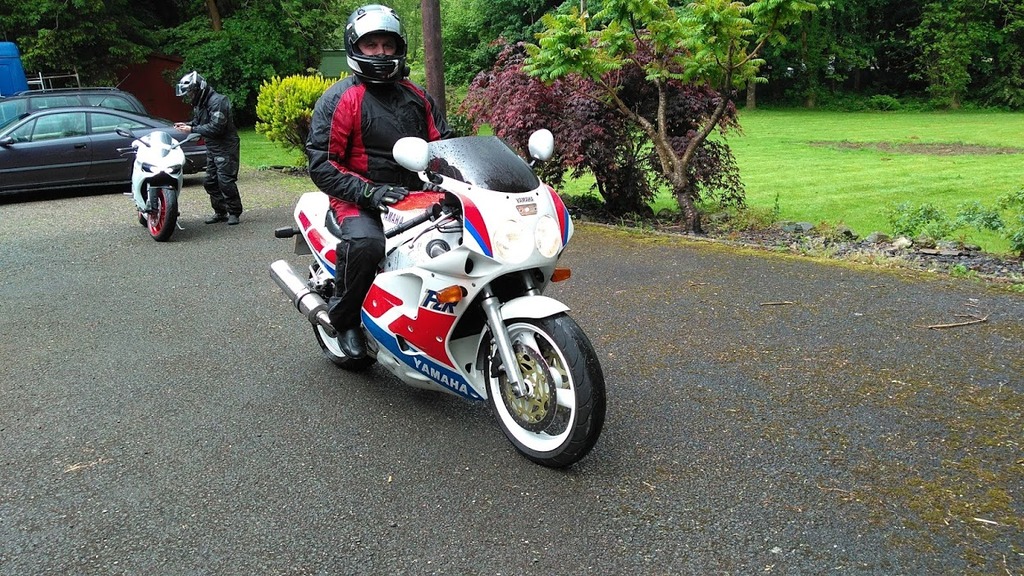 The Genesis - about to lead us into the sodden Welsh hills

We must have looked pretty cool as we rolled out of 'Biker's Retreat' and into the gloom...22 bikes...BC9 might be the swansong for this meet, but it remains as popular as ever. I tucked in right at the back, on tail end Charlie duty. Mrs.R was on pillion and a little happier with me as I had managed to borrow some water proof trousers for her from Nige and Tiv. Cheers! Cath and Owen were at the end of the line. The pace was steady with Cath understandably nervous on bike with nice shiny fresh rubber on the back. It was a real shame the weather was so poor as Nick had cleverly devised a 'Greatest' hits route combining some of the highlights of BCs1-8. The A470 for one, and later it was great to roll through the middle of Bishops Castle as sort of tribute and 'flypast' of the venue for BCs1-7. Many happy memories of some  great weekends in that quirky little town came flooding back. However on a day like this to be honest it is a case of just grin and bear it. In a weird way riding in such conditions can be a good experience...it teaches to caress your bike along, be steady on the throttle, delicate on the brakes and smooth into the bends. It's a great technical exercise. Anyway we picked our way along, much of the glorious countryside masked from view. I was pretty relieved when we got to the first rest halt, rather appropriately titled 'Bog Visitor Centre' as I was bursting for a pee by now! 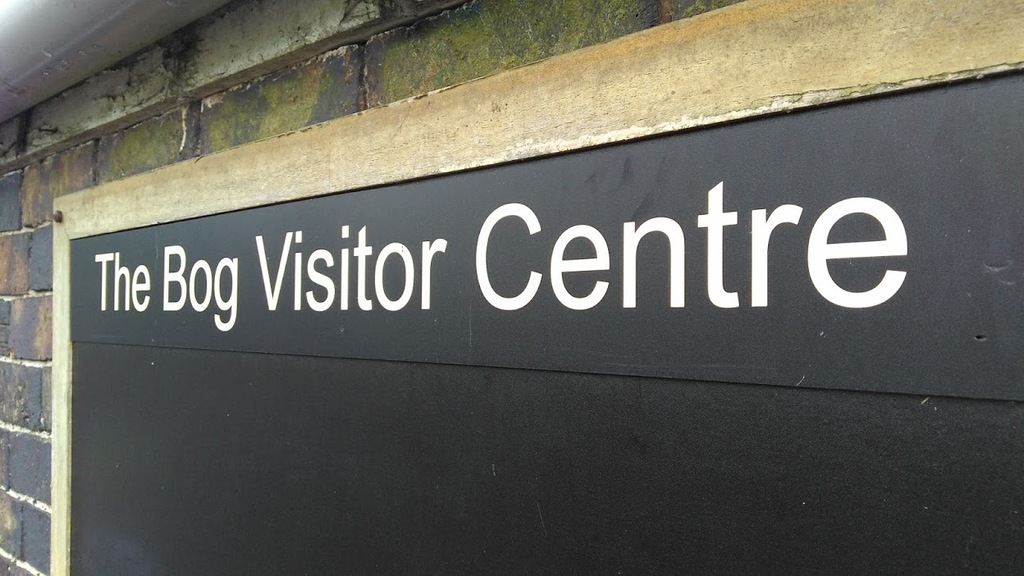 The best name for a visitor centre ever??

This charming little venue set in the hills of Shropshire is based in an old schoolhouse. Run entirely by volunteers. We all parked on what had once been the play ground in days gone by and made our way inside to the welcoming on site tea room. Only to be greeted by Nick's Mom...the legendary Mrs.S. Now she likes us all, but she loves Dirt Bike Dave and when our Scottish friend entered the building she rushed to greet him and towel down his sodden frame. It was quite touching to watch...has Nick a new step Dad? Should we re-title Dave as Dirt Bike Dad??? 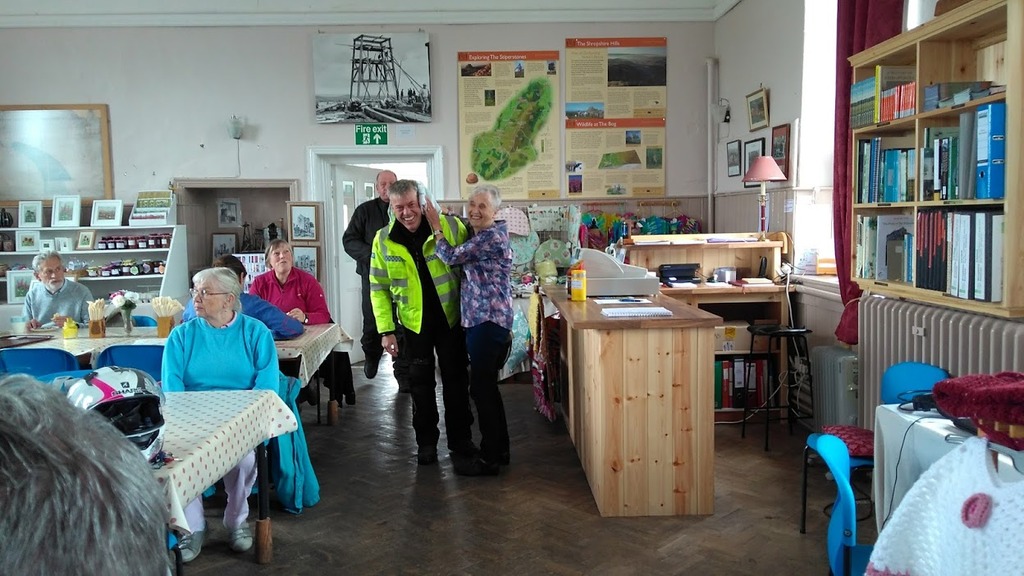 Some of us got a warmer welcome than others!

Anyway we all had a welcome break and devoured the delicious homemade tea, scones and other delights. Meanwhile outside, the weather actually just got worse and at one point water was cascading down the steps outside like a mini-water fall! It seemed prudent just to sit it out for while, drink tea and eat cake. That sounds like a decent plan to me and was particularly popular with the cake monster that is my wife, I should highlight at this point that today was our 28th wedding anniversary...I know how to treat a lady! So the bikers mingled with the locals, hikers and the curious who make up the more general clientele until the rain backed down from biblical to just pissing down! 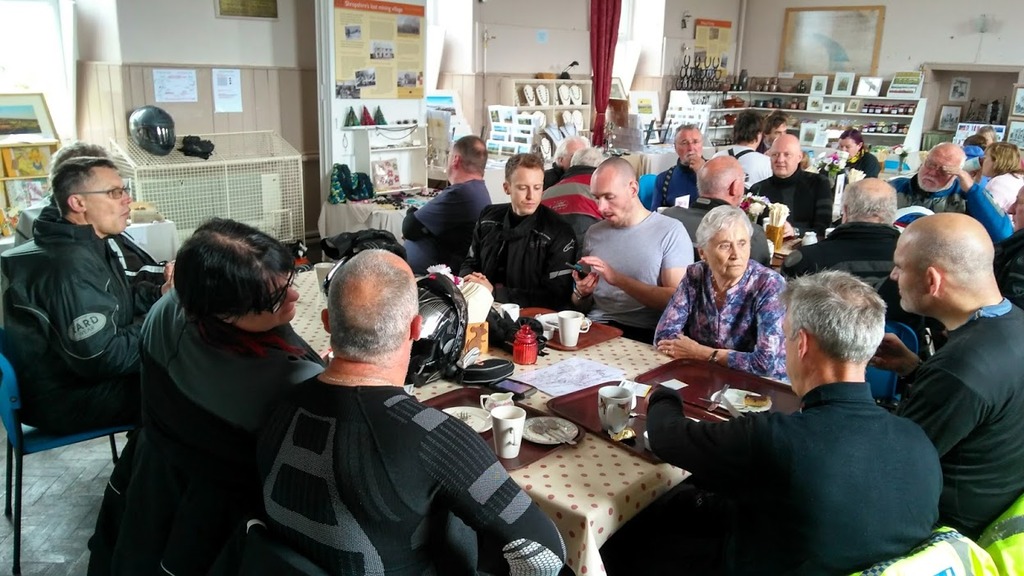 The next leg to Crossgates passed uneventfully but my mind was cast back to BC4 when we passed the scene of the first bike accident of that all too memorable day, when a Thundercat wound up in the countryside, quickly followed by a R1 gently hitting the deck. Nobody was hurt. The poor Thundercat rider was so embarrassed we didn't see him again on other ride-outs. I had swapped tail end duties with Steve on his Triumph for this leg and did get to stretch the Thundercat legs a little more than earlier. It was good to see everybody riding. Jamie, new to the group was holding up Thundercat honour well with a spirited performance under the circumstances and Paul of Team Lightweight was clearly bonding well with his gargantuan BMW hire bike. We rolled into the fuel station at Crossgates back in Wales to fill up and take 5 minutes.
At this point Cath and Owen called time on the sodden ride and returned to base. So it was just 20 bikes that rolled on to the hallowed ground that is the Crossgates to Newtown road. The A483! This is home turf for me; the 483 is a road I like to attack least a couple of times a year if I can. So I won't lie I elbowed my way to the front of the line and tucked in behind Nick and the FZR. I knew there wouldn't be any junctions to mark for miles and by now even the rain had backed off! The FZR  might be nudging 30 years old, my Thundercat nearly twenty, but they both remain quick, capable motorcycles and I had to admit the next twenty miles or so was great fun. Mrs R is a super pillion and I had a great time tagging along with Nick as the pace really picked up. The 483 is generally open and quick, but you have to be wary as some sections are really technical and can catch you out. The plod like it too as not everybody sticks to the speed limit like we do (ahem...)
Dinner was held at another BC throwback, the Red Kite centre situated in the stunning Dyffryn Melindwr Valley. The Pulled pork rolls were to die for and were washed down with another cuppa. 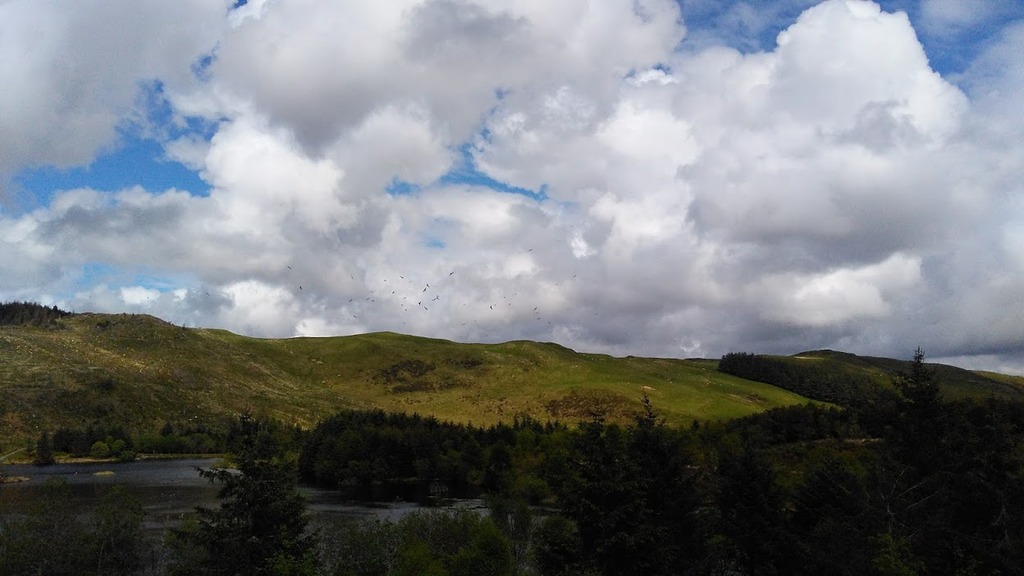 If you squint there are Red Kites in this picture! 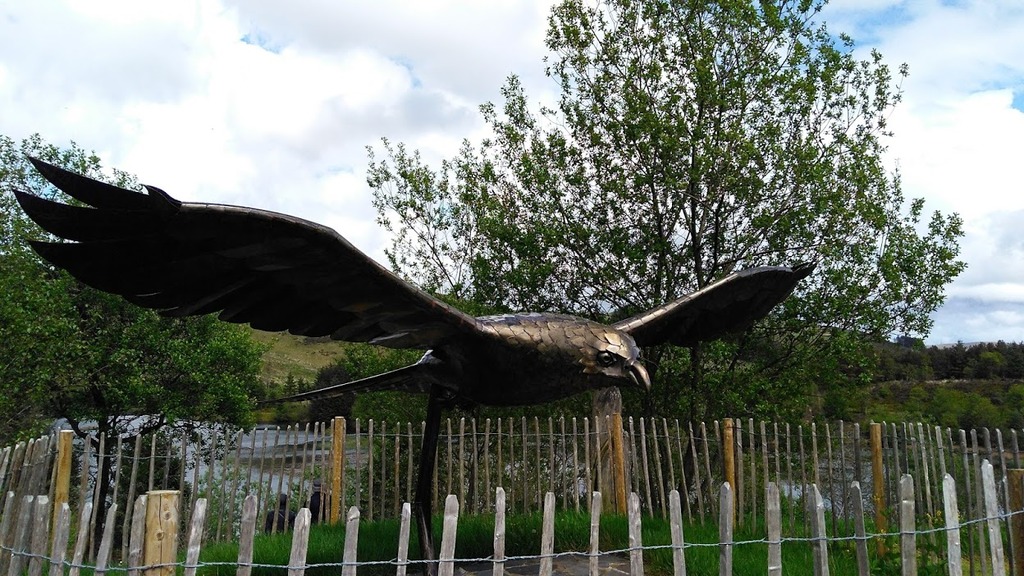 That better? That's  some zoom on my phone camera! 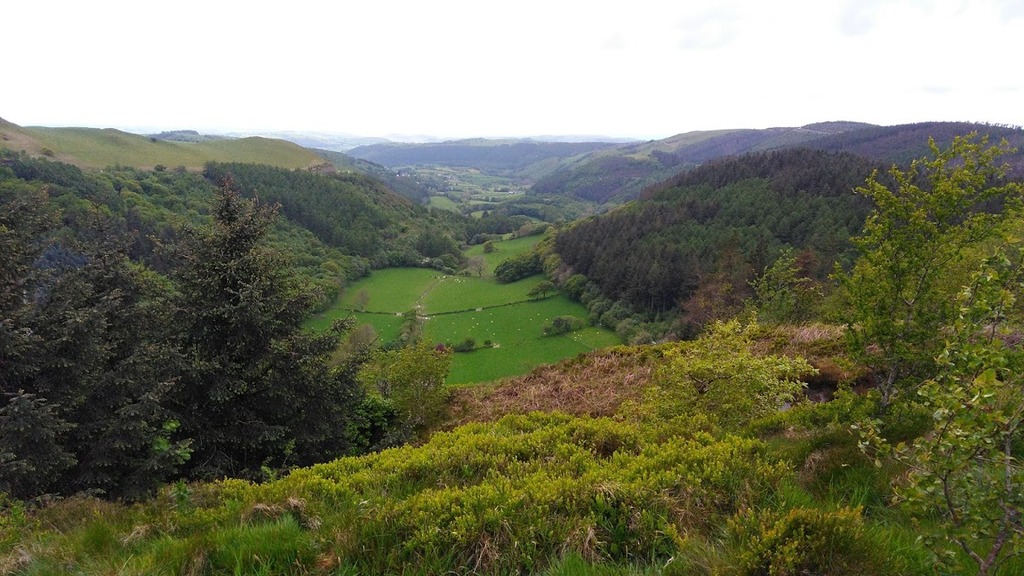 By now the weather was much improved and it was off with the water proofs as we headed out once more. I was in the general pack now and kept several people company in the course of the afternoon. Some great riding, but I did earn a numpty point nomination after managing to leave my top box open after one of the brief stops. Mrs R was somewhat shocked when the flapping lid tapped her on the shoulder as we sped along! Opps. Shades of Rosco, for those in the know! 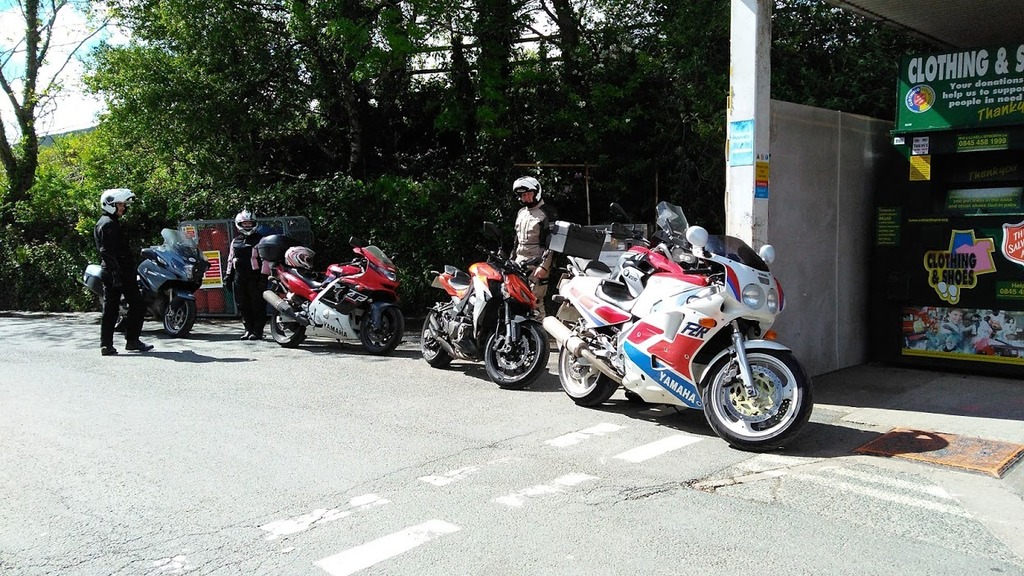 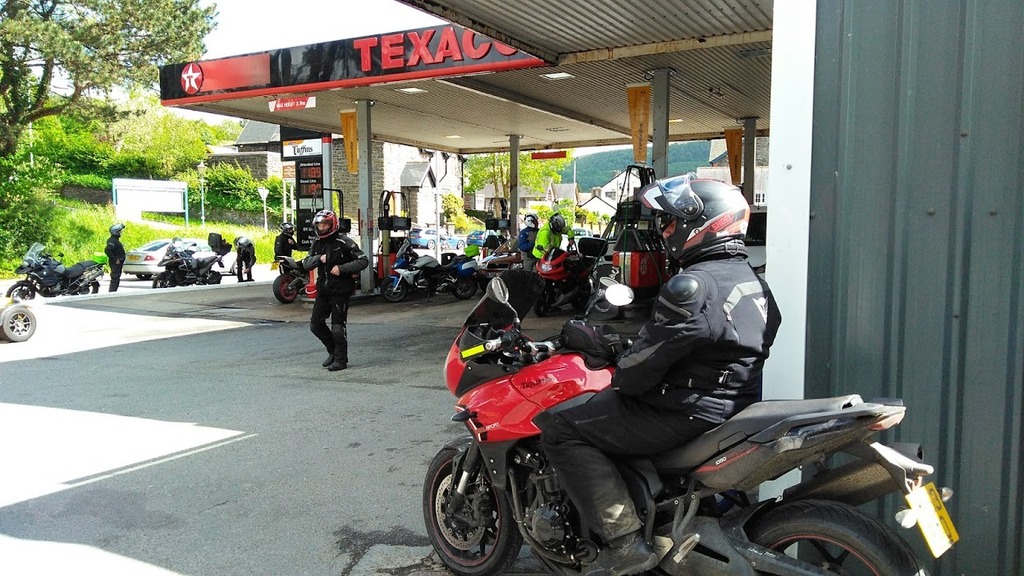 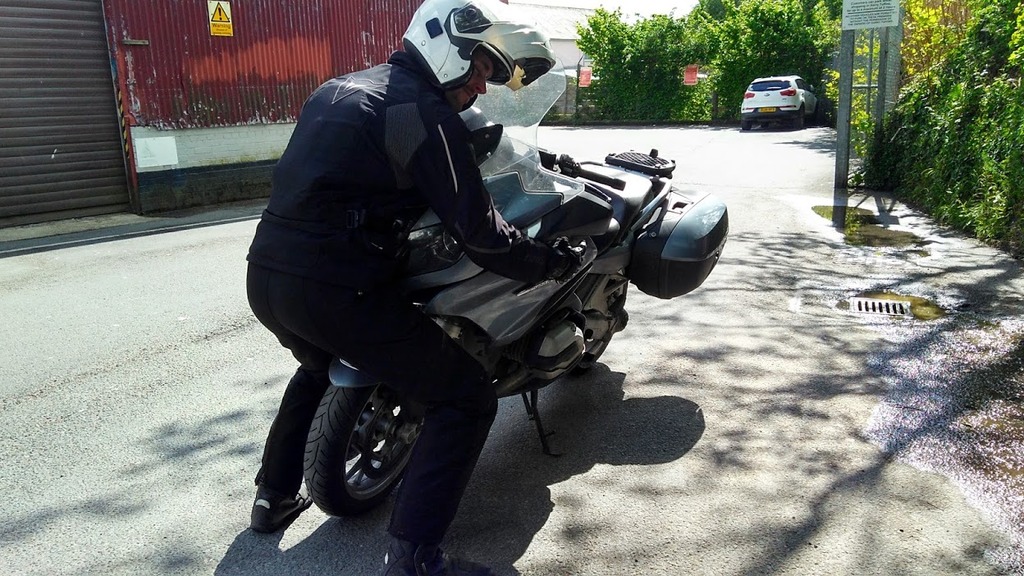 As the weather picked up we all enjoyed some fun riding. Dad's army defying pensionable age to show their normal pace and smoothness. I hope I can still ride like that in a few years time. I had one moment when I balls up a corner having being distracted by a rare car going the other way. How sad am I? There I was bombing along, sweeping through a bend and then think 'ohh that's unusual, turn back around to find myself on what could be kindly referred to as 'the wrong line'. Twat, nearly wiped out for being an anorak! Anyway by the weather was actually sunny and as swept along the coast line the view was stunning. Wales has this strange knack of turning into the Mediterranean when the some comes out. It is really odd, but very welcome. There is only one thing that you can do under such circumstances...eat ice-cream! What better venue than another old BC hang out...Holgates Honey Ice Cream Parlour on the outskirts of Tywyn. By now the weather was glorious and the ice -cream was both welcome and absolutely delicious. The perfect way to get set up for the last fast leg back to Biker's retreat. Rosco even managed to follow the right ride out this time as we left too! 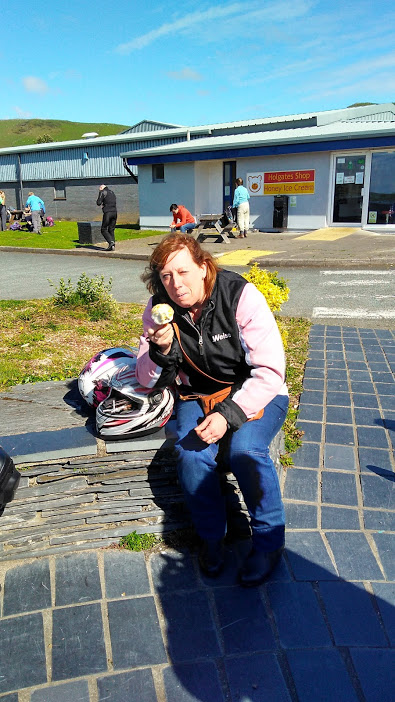 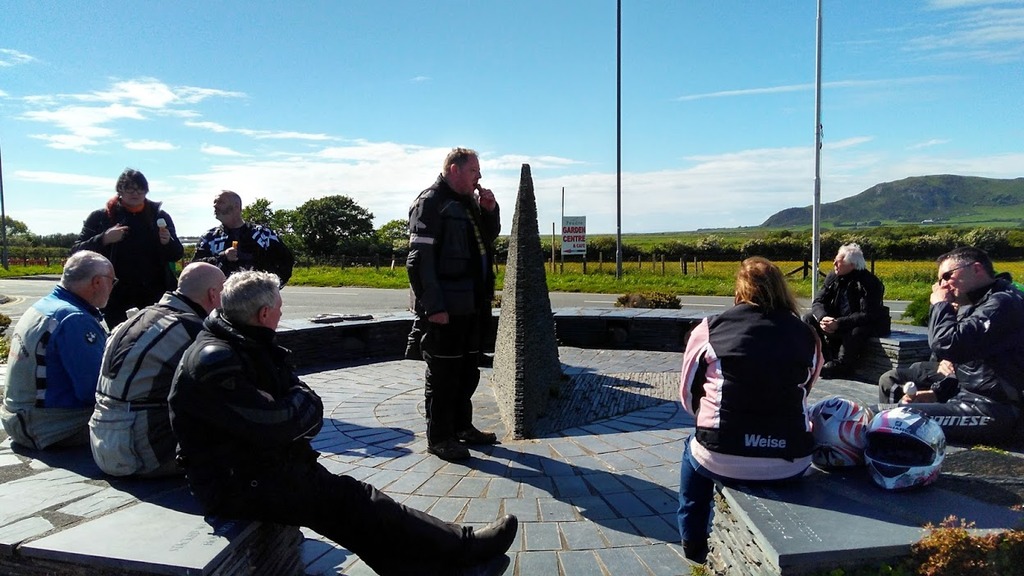 So we rolled back into Dolgellau happy with a great days riding, it was very much a game of two halves.  The theme tune for the morning might well of been 'Rider's on the Storm' but the afternoon was very much 'Walking on Sunshine', and yes it felt good! (listen to the song to get the full effect of my humour there!) 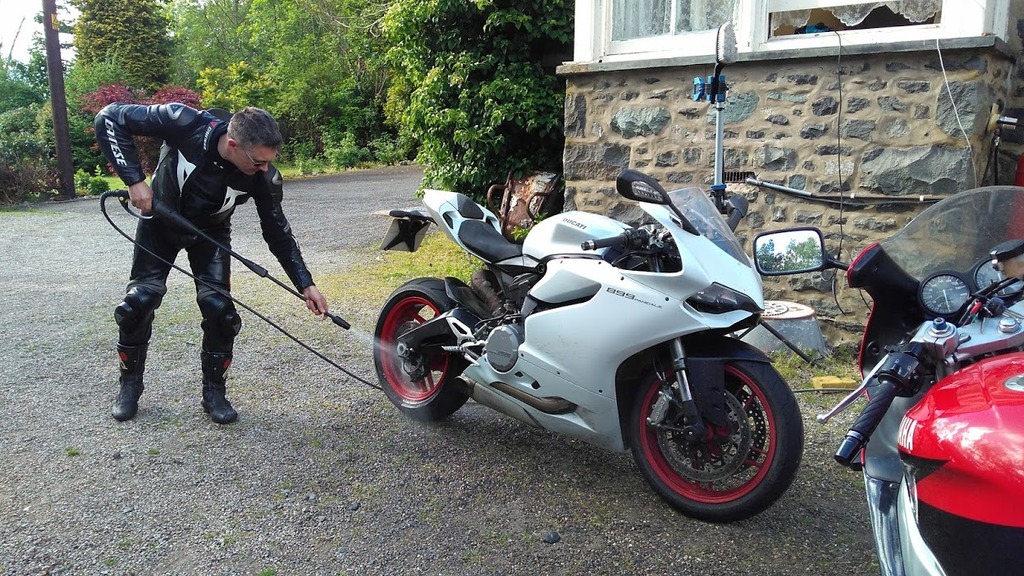 Greencat's valeting business is going well...it is a wonder there is any paint left on his Duke 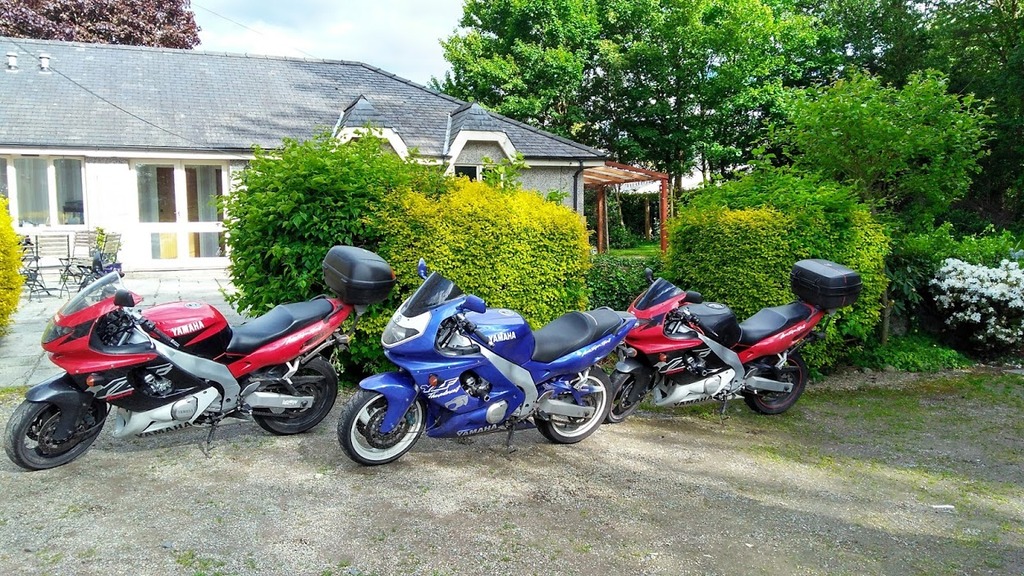 See there were Thundercats in attendance! Two of them in the fast colours as well...

The evening passed in a very traditional manner, beer, another stonking meal and then more beer! Only my traditional speech and awards ceremony marred an otherwise excellent evening! Although was also a good opportunity to stitch up Nick who (along with Ellie) has organised and led all nine BC meets since 2009. This was to be the last. So I decided as we live in a proudly democratic society to put it the a vote...guess what we voted for him to carry on!

Anyway The awards:
'The Dancing Poo' award - to Nick for leaving us in the shit with no organiser (until the vote that was!)
'Bobby Prize Medal' - To Own and Cath, for paddling their way through the morning, then deciding to give up and miss all the best bits in the afternoon!
'The Distance Award' - The Scottish contingent just edging out Team Lightweight for this one!
'Spirit of the Weekend' - medal goes to Jamie, for boosting Thundercat numbers to three(!) and generally being a good stick all weekend!
'Best Pillion' - bar of choccy to my Mrs. Fair play, not the typical way to spend your wedding anniversary!

Nobody managed to leave the indicators on for too long this year, so that award went unclaimed.

So the coveted 'Numpty' award, once held by such legends as 'Helmet Dave' went to yours truly! - Top box Tone strikes again.
It was a pity Duncan wasn't here this year, he normally picks up a couple!

We retired to the bar once more. The beer and banter flowed again. I got murdered at cards and started drinking whiskey again (NICK!!!). Team Lightweight managed 10pm and we all generally enjoyed ourselves! 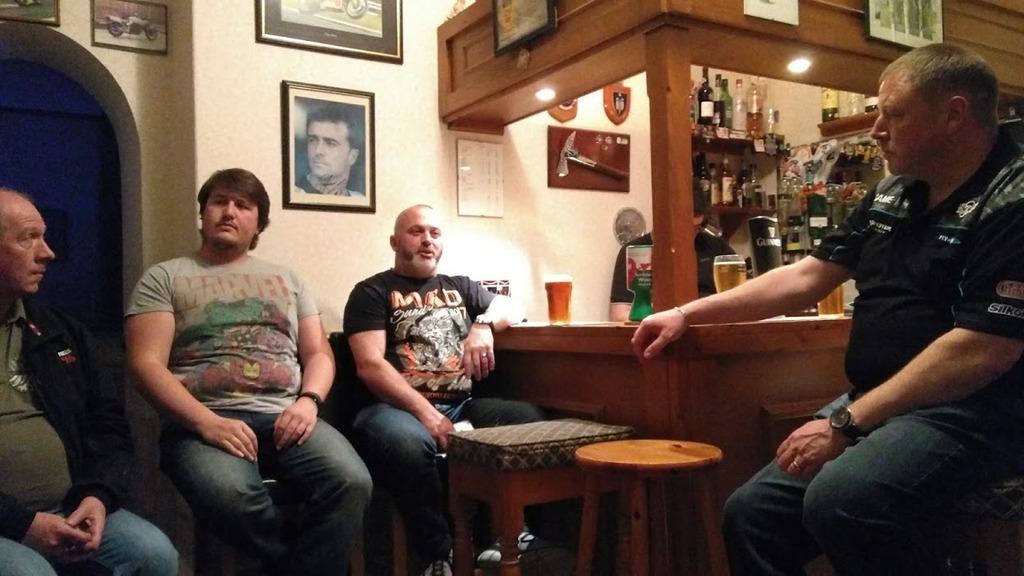 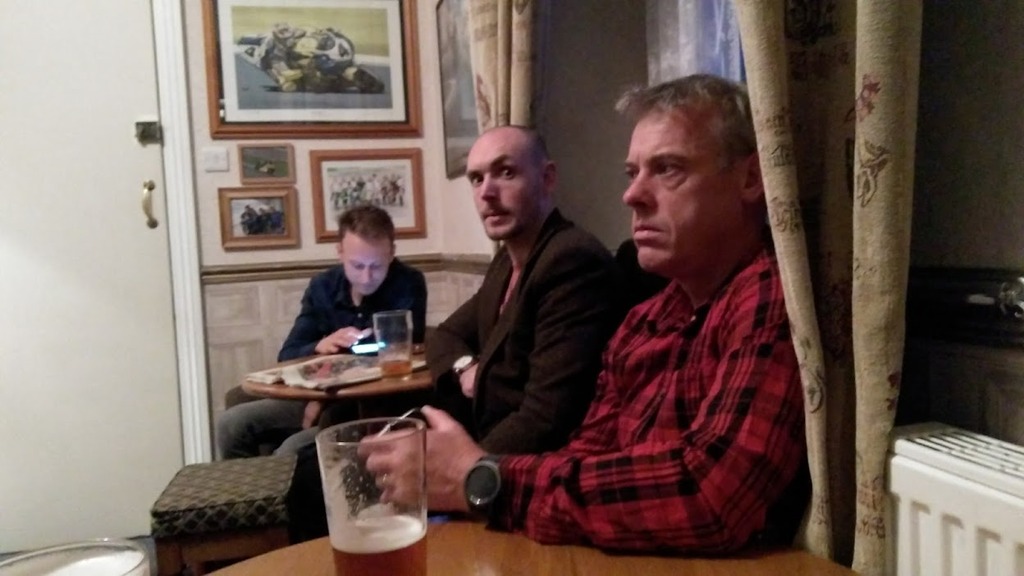 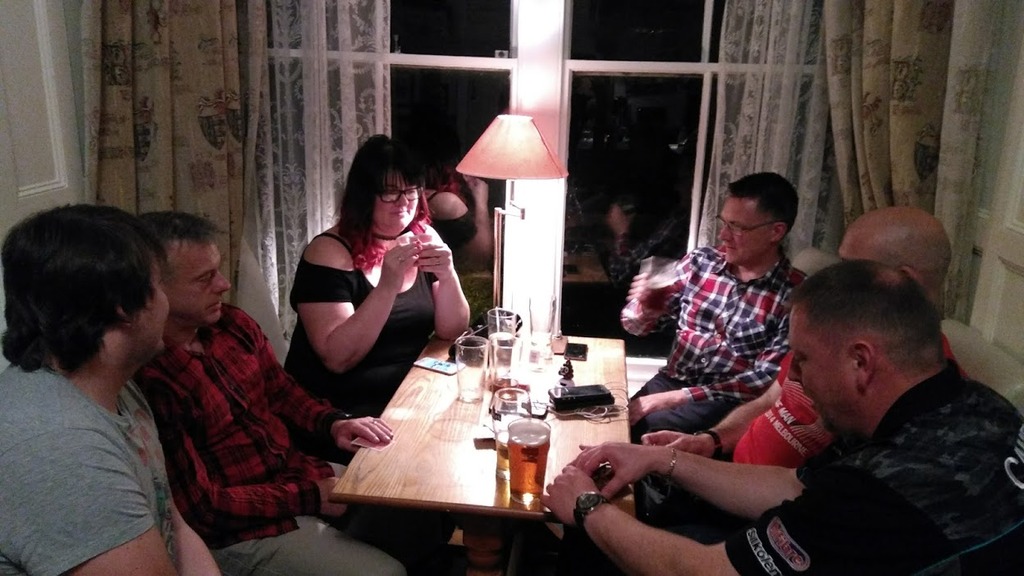 The bar was busy again... 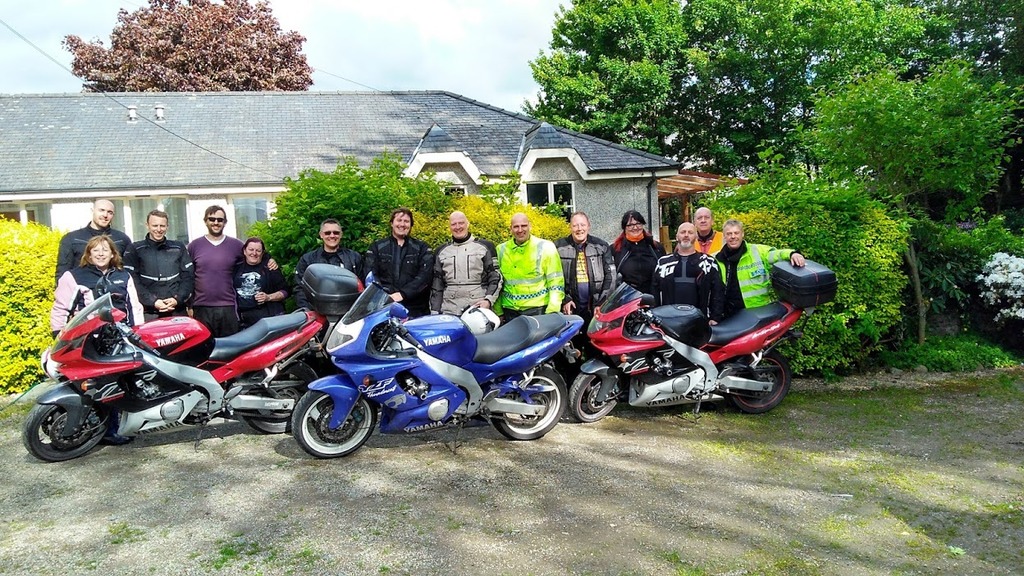 The Bikers Retreat Crew...The Platoon were out on patrol

The thank yous:
Nige and Tiv of Biker's Retreat...the perfect hosts at the perfect venue
Nick and Ellie for setting up another superb weekend
All the tail end Charlies for the Day
The whole team for getting back in one piece
and finally Democracy - for allowing us to talk Nick into doing it all again! 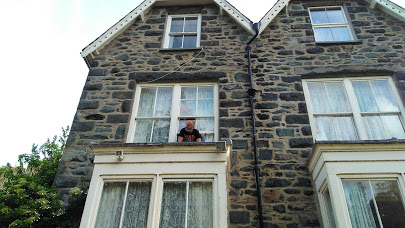 Nice one Tony!
This Democratic voting has thrown up some surprises lately hasn't it?!

Brilliant write up & pictures as usual tony. Bc cant end, ive never managed to attend on one yet.

@robertcains wrote:Nice one Tony!
This Democratic voting has thrown up some surprises lately hasn't it?!