The Ford Mondeo Titanium X is a very well equipped car boasting such delights as Climate and Cruise Control among its many bells and whistles. However there is one key button missing: The one you press to turn it into a motorbike!! You see for the WeeMac this year I was car bound. The prospect of 265 miles door to door on my Thundercat which is currently nursing a somewhat soggy rear suspension, 2 up with a pillion knobbled with a dodgy back was just too much. So it was that we trundled up the M6 in my car consoled only by the memories of the ride on the same route in 2015 with Stevecat. The A7 is a lovely road and even my diesel 'rep-mobile' couldn't entirely kill the fun!
After a very gentle drive we rolled up the imposing gravel drive of the ever impressive Broadmeadows House just before the guys & girls returned arrived back in from what sounded like an excellent days riding. 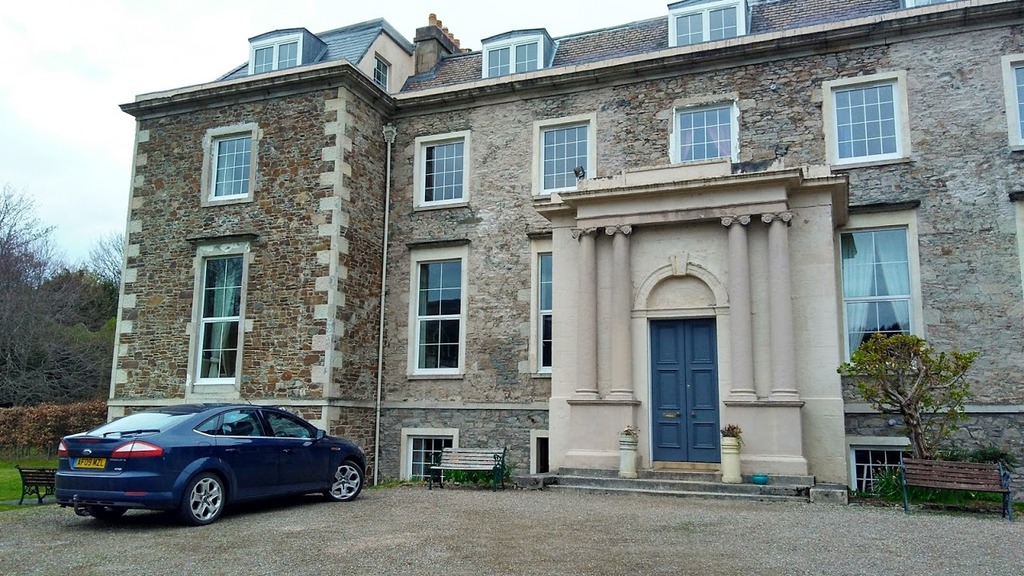 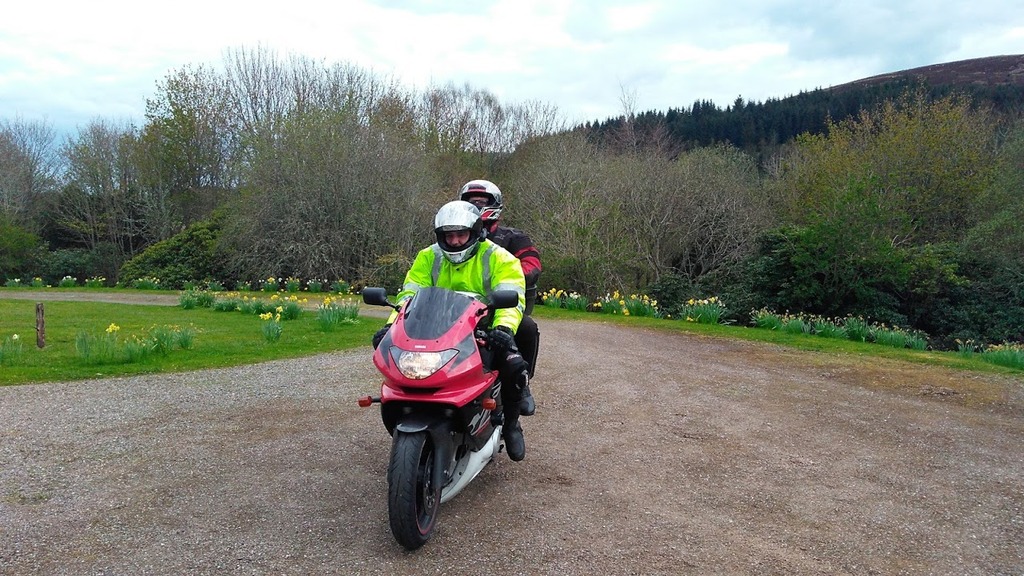 Some WeeMac traditions had been kept alive: the group managed to get a split up at one point and managed to lose the leader entirely for a while! I seem to remember this happened in 2015 too and we wound up the car park of a furniture store in Cumbria. God knows what occurred this time!? But essentially 200+ miles had been covered with no serious incidents...so all is good with the world. What did strike me was the dearth of Thundercats, granted this was in part my fault, but only Rosco flew the flag now, albeit riding one decked out in the much faster colour combination of red, white and black! The group seems to morphing gradually into the Tracer and Fazer forum.org! There were plenty of these in evidence! So at least Yamaha is remaining the most prominent brand in the group. Ducati and BMW were also represented, but we won't talk about them...! Mrs. R was nothing less than stunned with Broadmeadows and our beautiful apartment in particular. I was glad we decided to come despite having to pitch up in my tin box. 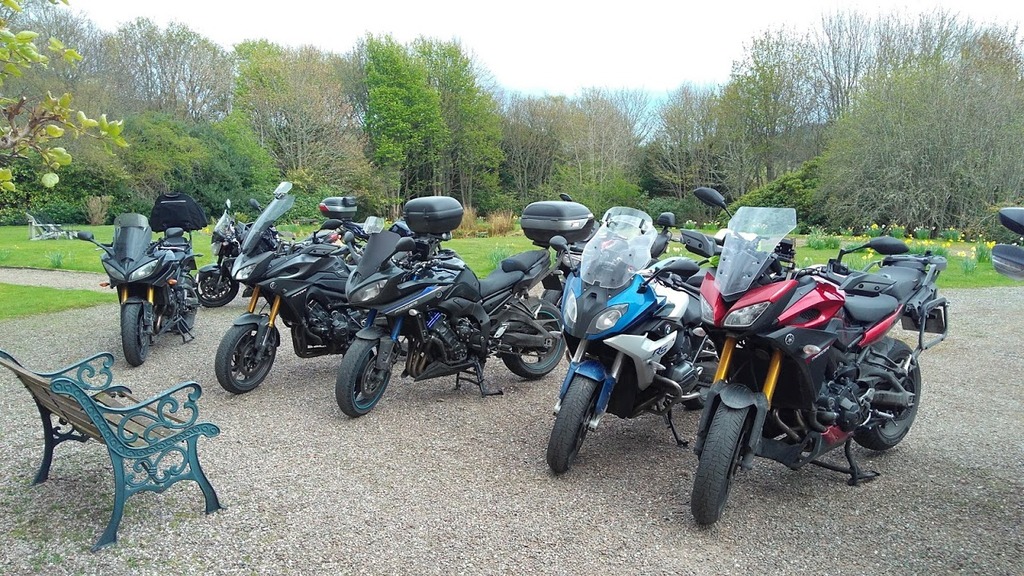 As in previous years everybody mucked in to make the group evening meal and all 21 one of us gathered in the expansive dining room like some bizarre biking version of 'The Waltons' to eat together...pass the salt Sue Elllen and all that. Hang on she was in Dallas...you know what I mean!
I should give an honourable mention to 'Dad's Army' here as Terry's (aka Captain Mainwaring) crew have become known over the years. They had been on the ride out today but were staying elsewhere and heading home in the morning. Sorry I missed you all. Say hello to Pike for me!
Back in the 'Big-Hoose' the beer flowed and old friendships were continued and new ones created and cemented. We shared our apartment with a charming couple, Av and Faith, who had ridden up on their pristine Ducati Diaval. They are lovely people and Mandy and Faith were soon rattling way to each other like firm friends. Janet and Kevan were new to me too, and similarly car bound, so we had a bit in common! But Rosco had planned a big surprise for us all at 8pm and as the clock ticked towards the big moment the anticipation levels rose markedly: Cometh the hour, cometh the man and at 8pm as is if from nowhere (appropriately enough as it turned out...!) a magician appeared at the dinner table. I have to say the chap was brilliant, I watched him like a hawk but I could not for the life of me work out he performed his tricks. Little Ewan in particular was held spell bound if you will excuse the rather clumsy pun...His expression was a mix of astonishment, bewilderment and delight. 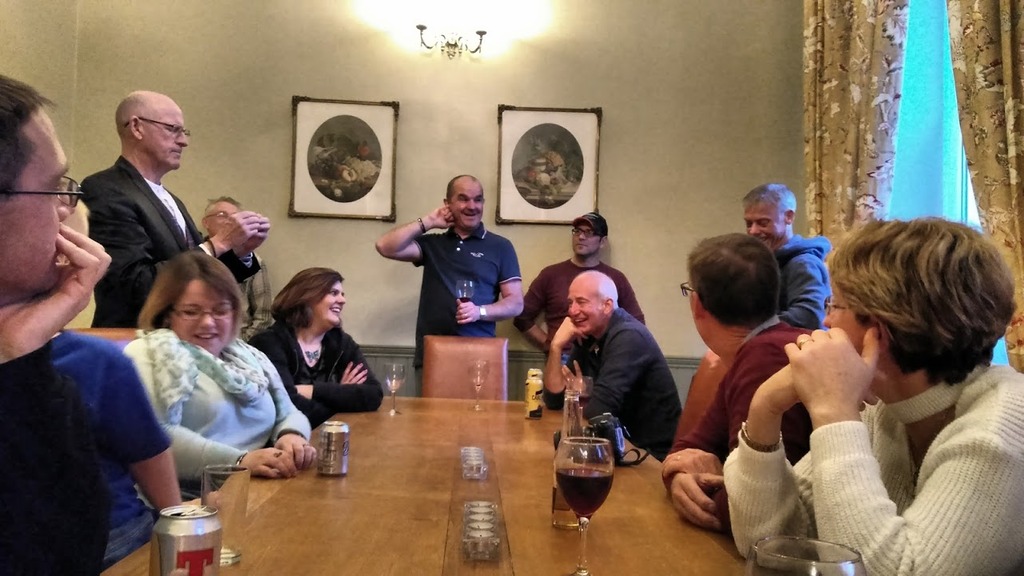 The magician does his thing... 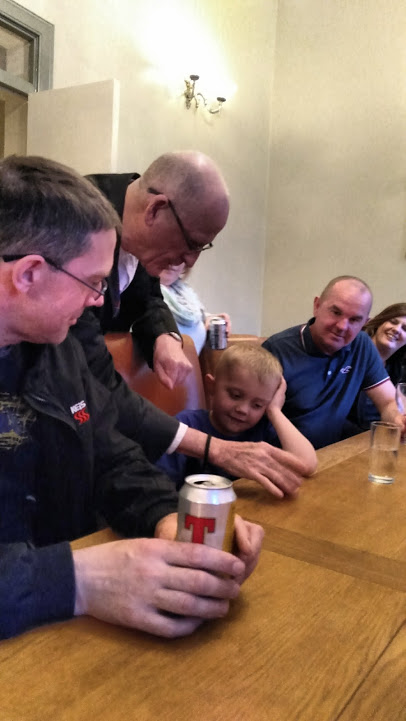 Pete the magician continued to entertain once we retired to lounge for another hour or so. Truly amazing and I still don't have a Scooby Do how he does it. Top work Rosco! What the plan for next year? Any chance of Pink Floyd?? Actually with this magician you could probably conjure up Hendrix! The rest of the evening flew by as the beer and banter both flowed freely. 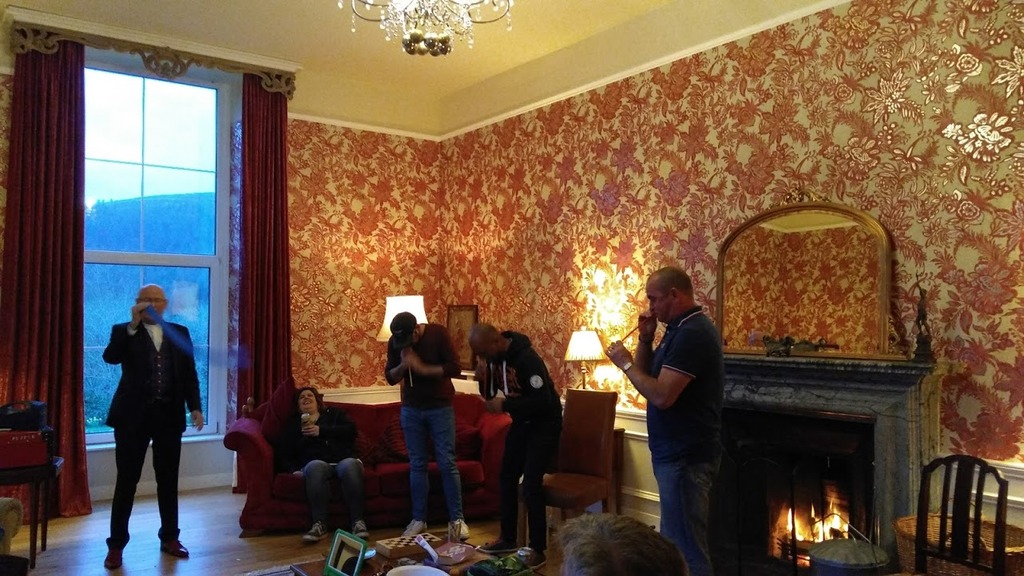 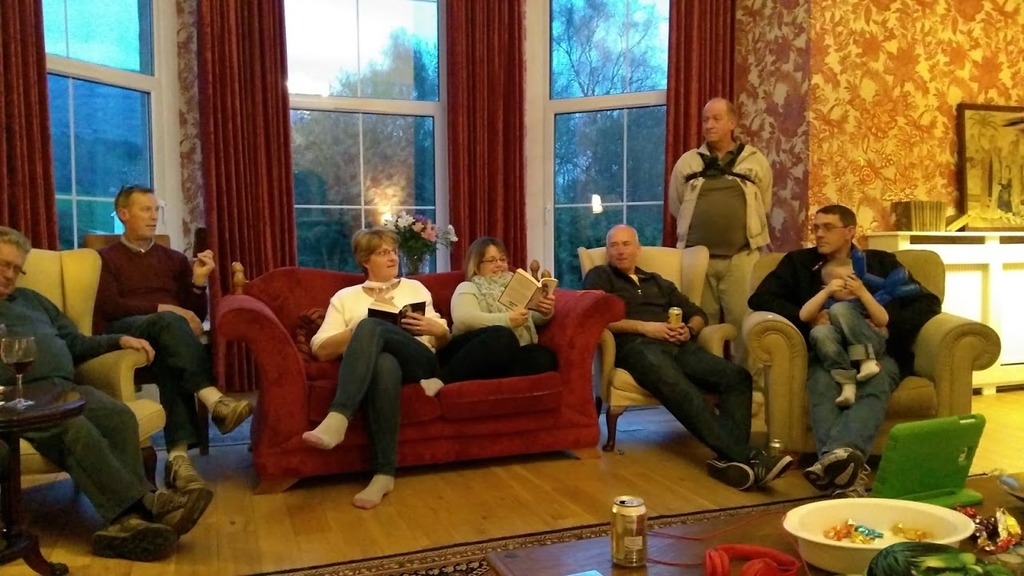 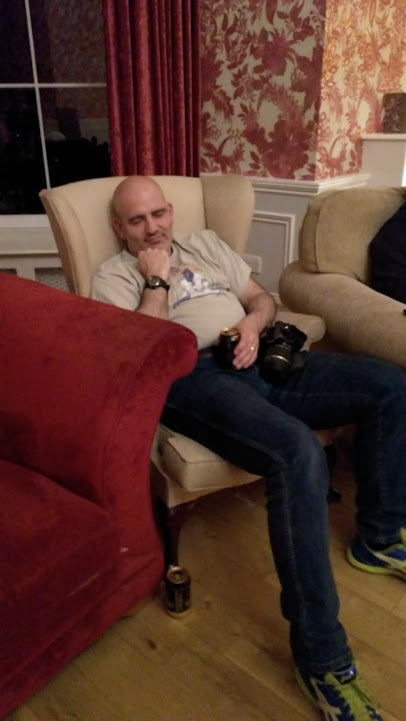 It was all a bit too much for Rosco...as usual

So ended another grand day in Scottish Border country.

I won't lie, I found it hard to watch the bikes roll out of the car park for second ride out the next morning. I was itching to join you all. Roll on 2018, and in the words of a certain dire Austrian actor...'I'll be back' (OK, OK 'Total Recall' wasn't bad...) 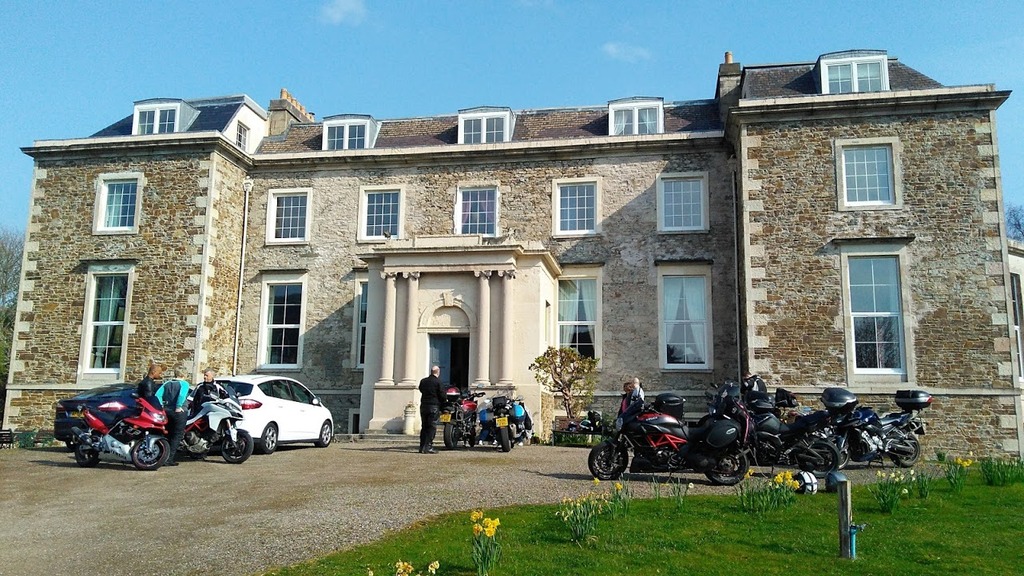 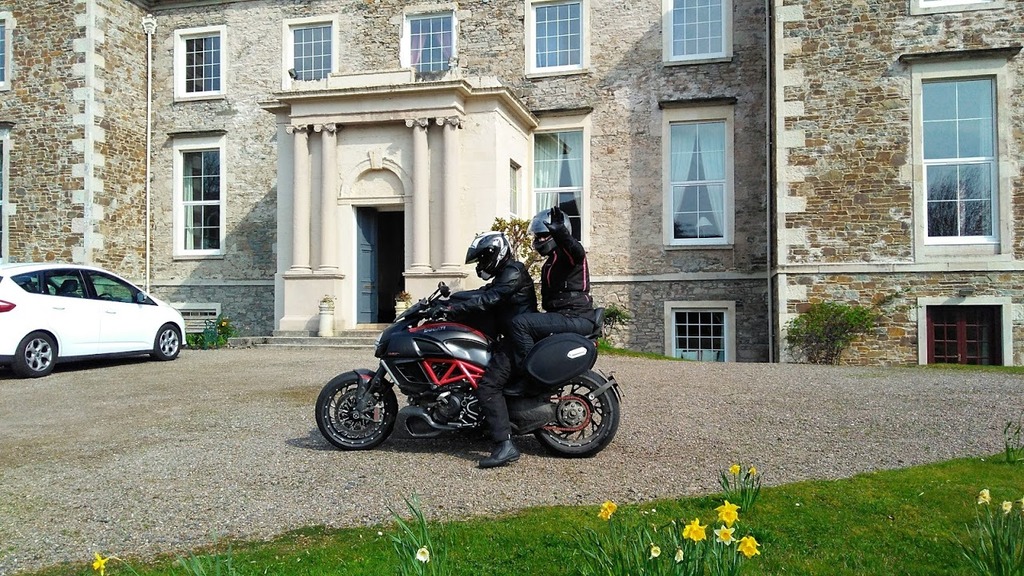 Mrs. and I instead took in the delights of the Canal lift at Falkirk and the nearby Kelpies..both well worth a visit if you have not done so already. The canal lift is an amazing piece of engineering, almost a piece of modern art. Whilst the Kelpies are as truly stunning pair of sculptures that stand guard over canal lock. They are quite beautiful and huge close up, I didn't realise they stand the best part of 30M high.
We got back to base just as the ride out returned too. Again by all accounts they had a superb days riding. I will have to let one of the guys let you know of their adventures. So in the words of a famous report from The Falklands War, 'I counted them all out and I counted them all in'. Everybody seemed to be buzzing, so it was clearly a great days riding.

That evening everybody mucked again to produce a fabulous roast for us all. Although special mentions must go to Panzer Builder (Rich) and big Euan who baby sat the whole process. Just like the first evening the evening melted by in a blur of banter and beer. For my part I maintained my unbeaten run on the pool table..ok, so I only played one frame, but I won. Meanwhile Ian's pool skills have moved on massively since 2015. I think I saw him pot something at least once. I think it might of even been one he was supposed to pot as well.... 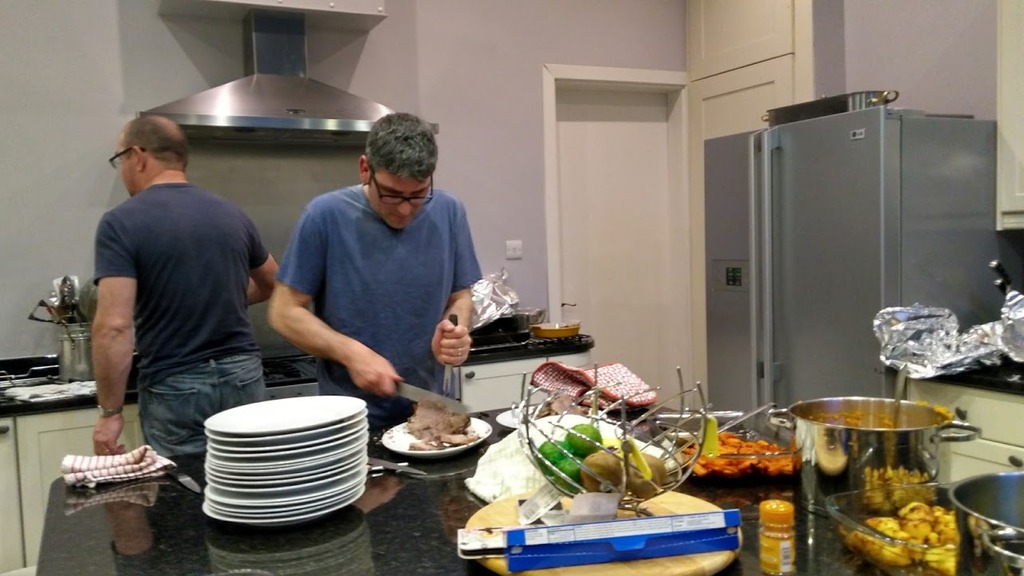 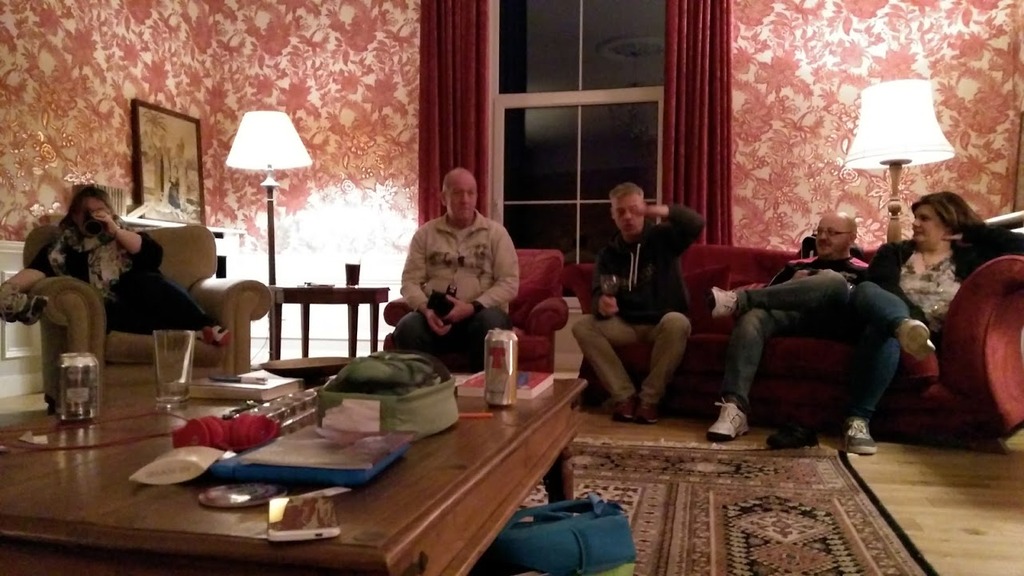 Dave explains something to Steve... 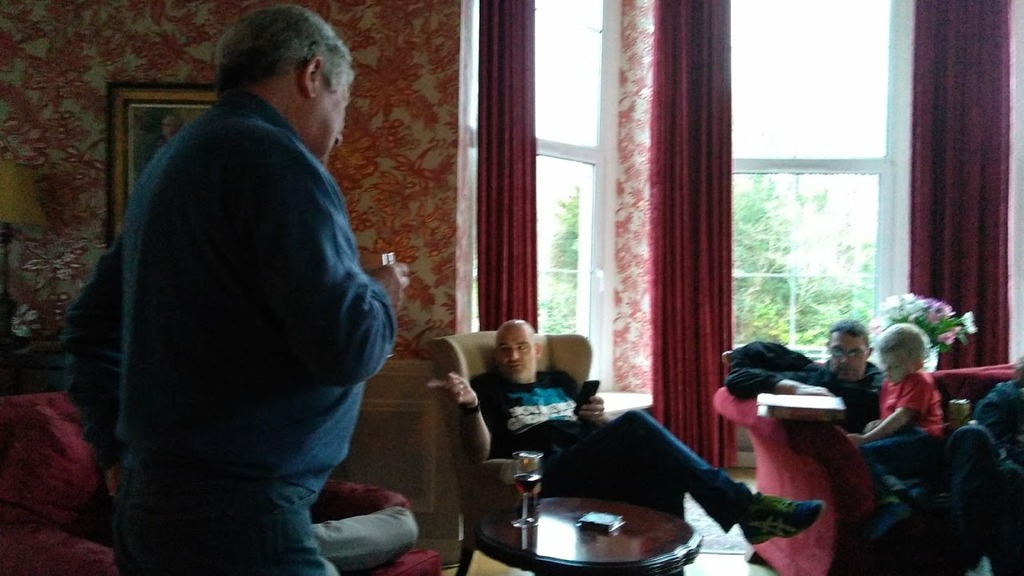 I think you find that is MY chair Rosco...

It was a another cracking evening. In the morning we all gathered for another huge breakfast rustled up by Dave and Terry, where even a bacon shortage couldn't spoil the fun. There was however enough eggs to start our own supermarket! 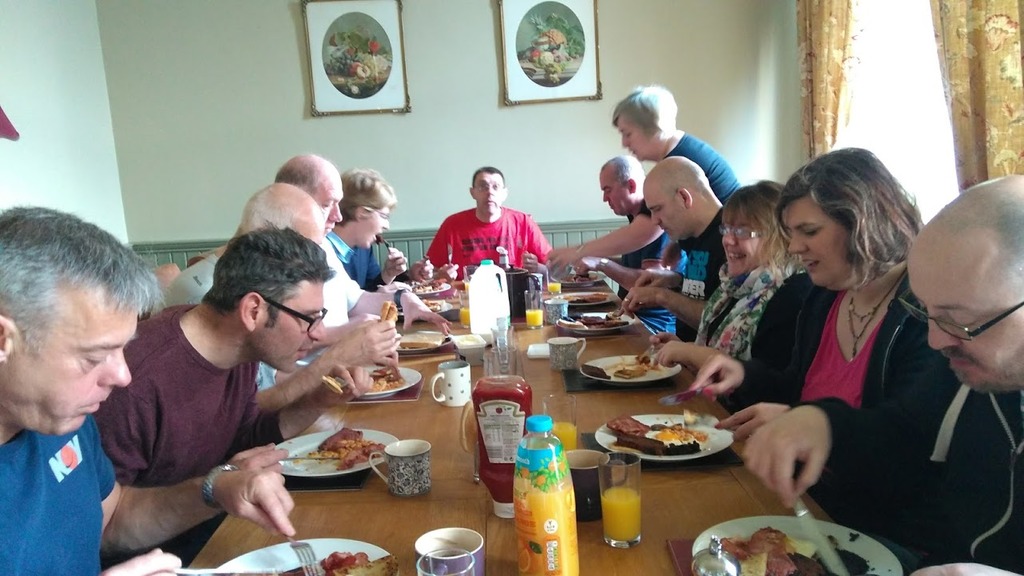 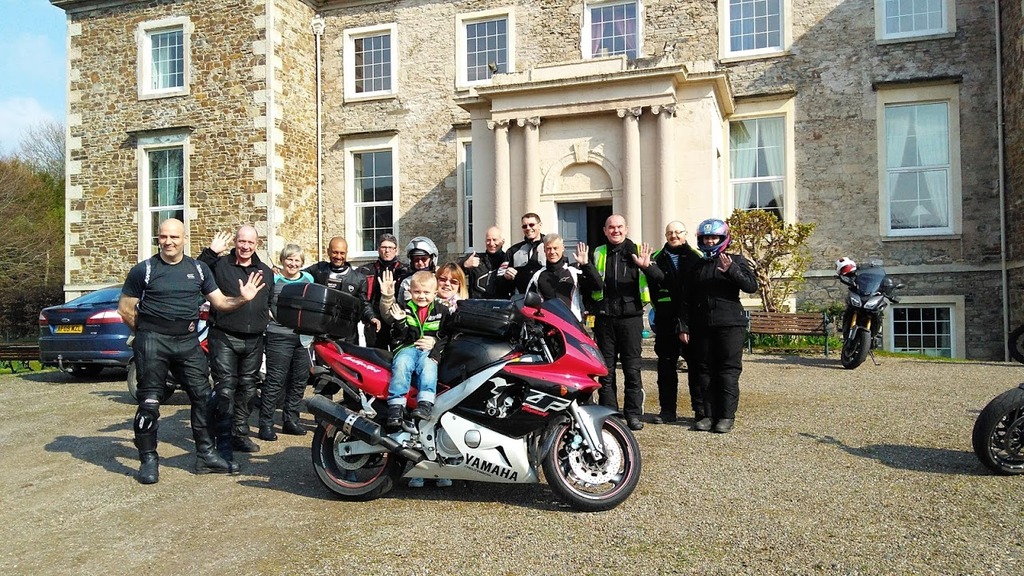 The group shot, what type of bike is  that? It looks great!

Times like these should be treasured, locked into our memories and brought back out during a bad day to be savoured. They will put a smile on your face, guaranteed. So I will conclude by saying thanks to everybody who made it such a enjoyable weekend and a special thanks to Rosco to doing a superb job of organising again