Had my cat in Steve Lynehams shop in Swindon getting an MOT, brake pads and the fork oil seals changed.

In there were a yellow and silver P Reg cat and a red cat very similar to mine but with crash bungs.

Just missed the guy picking up the red one, thought he was nicking mine when i drove in.


Cost me £149 which I thought was very reasonable, the other red cat was apparently about 3 times that amount, probably why he drove off at lightning speed. 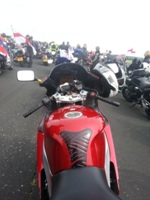 The other red one was mine, sorry I missed you!

And yes, the bill was "interesting". New header pipes, new headrace bearings and new pads at the front. All in, £400 :-(

You rode out just as i was turning into the estate, sorry to hear about the expense, still you should get a few more years out of it now that a couple of the big jobs are done.
Im still not convinced about my fork seals, I had just cleaned and polished the bike the day before and there was certainly no signs of oil leaks from the forks. Guess they must have blown on the way to the workshop?? although the front end does feel so much more planted than it has done for months.
Its the first time i have used Steve Lynehams, not sure if I would recommend or not, how have you found him? or do u know of anyone else in the area you could recommend.

Yeah for what I had done I cant complain at the price, and like you say it should really extend the life of the bike so it's all good.

I've always used them since I've moved to Swindon, personally I'd recommend them all day long. They are pretty strict on MOTs, which in my opinion is a good thing - when I was there last weekend they failed the guy before me (on a Thunderace, as it happens) for nothing but an illegal numberplate, which I guess at least shows they take it seriously.

Bike Treads in Kembrey Park isn't too bad either, although I haven't used them as often - usually only when I can't get an MOT slot with Steve Lynhams.