So yesterday I went to H cafe in Oxordshire to meet some guys on the sv forum. I swing by my mates on the way, we have the usual banter while he gets his bike out and we head off.

We pull up at the cafe and get off our bikes and a fella comes over to us:

"Hi guys, just in case you don't know, we are from {insert name here} Suzuki dealership and have brought some bikes along with us today and running test rides throughout the day if you're interested. The idea is just to get you on some bikes you might not have ridden to see if you like them."

Me and my mate smile at each other, my mate did 'Operation test miles' the other year where he set out to see how many bikes and how many miles he could do in a year on test bikes alone, I think it was about 1,500 miles, so this was right up his street.

The rides were in a group format with a dealership lead and TEC and us numpties in the middle. They set off on the hour and lasted about 30 mins, they said the route was about 20 miles.

First bike I took out was The M1800 Intruder 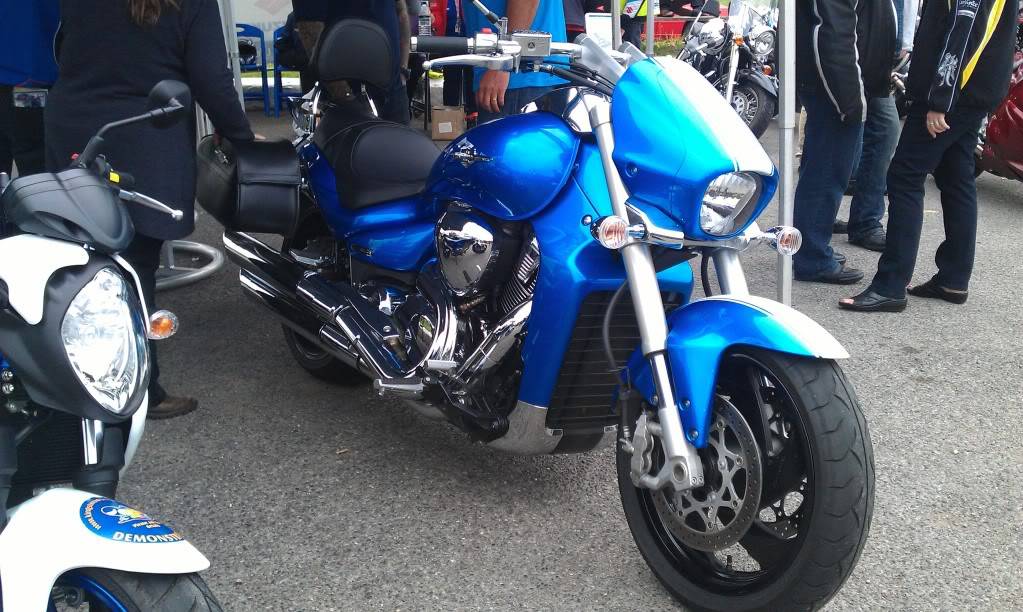 I've never ridden this type of bike before, the leader came over and said to be careful on it if not used to it as you'll probably end up grinding the pegs. We were about to set off, I turned turned the engine on and we set off, out of the carpark and around the roundabout, I went really slowly as the fella on the bus a in front of me was doing 5 mph........ and we carried on the test route. We got to the first corner took a left and BAM, GRIND, SCRAPE, the pegs went down.

Hells bells, it scared the crap out of me, I don't really like grinding the pegs, typically I think the knee should go down before the pegs, I ground the pegs on the Blackbird and other bikes and it's a gentle scrape, and a bit of vibe feedback and noise as if to say "I say dear boy, for both our sakes, please refrain from leaning much further over. Terribly nice of you"

This was more of a big Fijian bouncer giving you a push to say "Get 'fuggin' upright now". I thought OK, no problem, I'll just watch the speed, wasn't going fast on the little turn anyway, but I'll be sure to go slower. Nope, didn't help, practically every corner, crunch, scrape. I enjoyed the bike, but seriously some of the corners, bends and roundabouts I was going ridiculously slowly around and still scraping so that was a shame, otherwise, I liked it, plenty of power and pulled well. My mate tried it and confirmed it was ridiculous, a lot worse than the other bikes in this class he's ridden for pegs down.

Next bike was the GSX1250FX 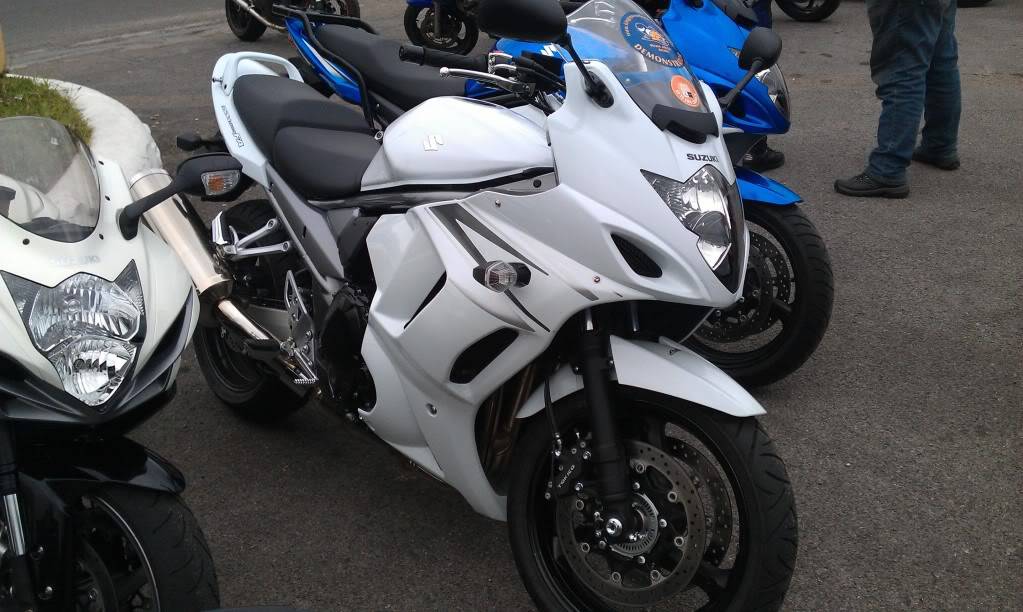 This bike I liked, I could sit on this all day on the motorway or take the interesting route and hang off like a monkey and still arrive fresh. Great engine, very comfy, plenty of power GREAT bike.


As I am part t of the SV forum the Gladius is something I have heard of, Suzuki stopped making the SV and produced the Gladius, after a short while, they started making the SV again, take from that what you will. I thought it would be rude not to have a go 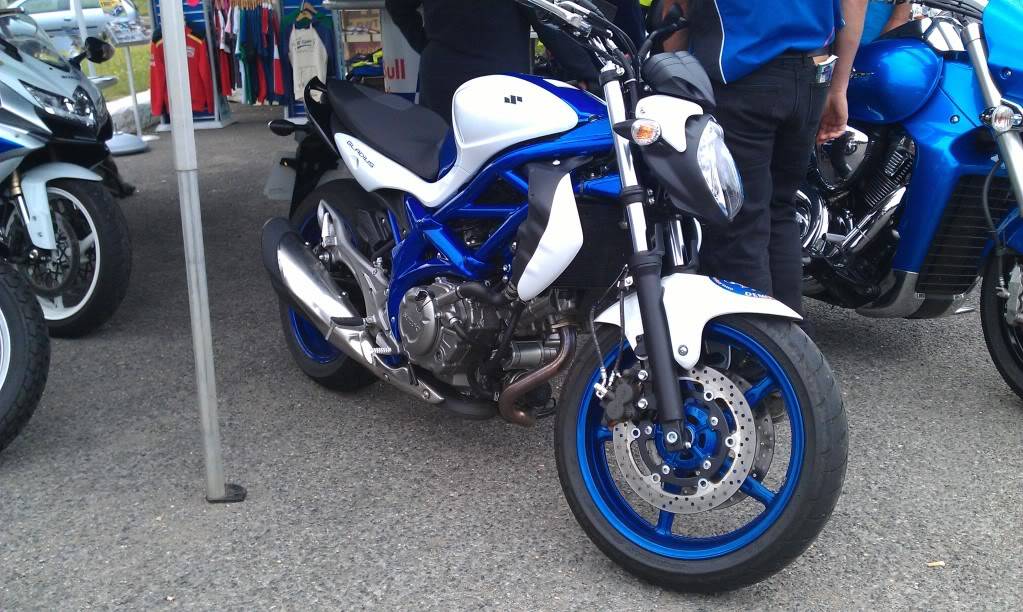 I was told to bead in mind it had been lowered, my friend promptly chipped in that of was about to be lowered a bit more when my fat ass got on it.... who needs enemies eh

I sat on it and just started to giggle, it felt like a monkey bike. We set off, got around the roundabout and I can't lie, I enjoyed it. On this bike you can Lin the throttle, wait for the red line, change and pin again no problems. Don't want to own one, but great for scratching around on

Then I gave in and went for the big fella, the BUSA 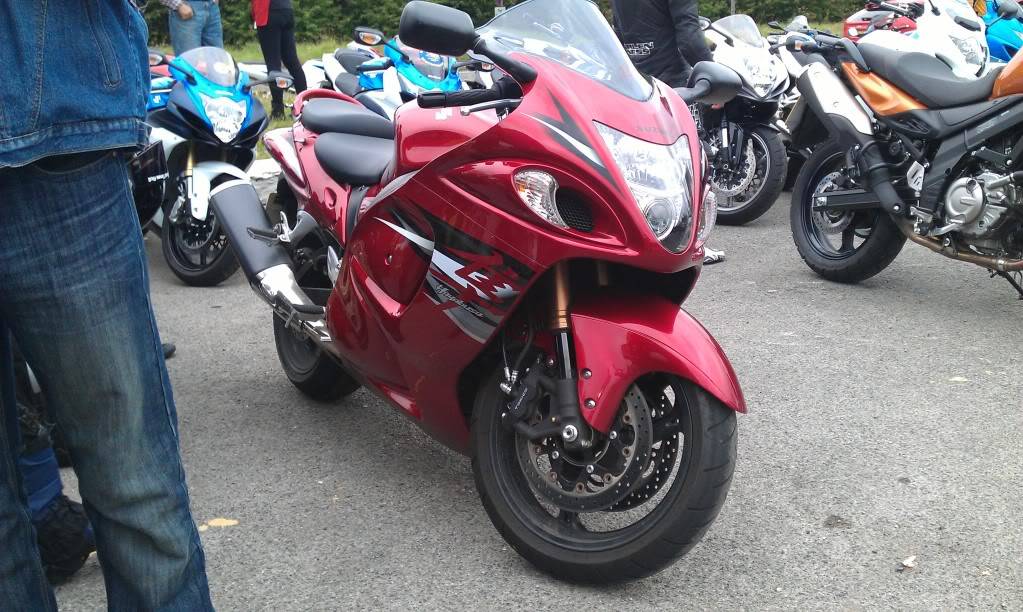 I've never liked them, I put them in the same category a Porsches you have to admire the engineering but man are they ugly. As a Blackbird owner I had to try out the competition. It pains me to say this but my god it's a fantastic bike.

Just endless power, it won't chew you up and spit you off for a minor mistake, I was able to give it plenty without the front wheel coming up. We got in a bit, I think it went from 30 to NSL so I dropped a cog or two and give it some and the words "holy mother of f**k" came out of my mouth followed by a yeehaw and massive grin.

Great bit of kit but it is not a bike I would want to do 300 miles on in a single day, the bars and lever position meant your hands were twisted upwards a bit too much, just pointing the levers down a bit would be a massive comfort improvement but the seat position too.... it really is just a massive Gixxer, NOT a sports/hypersport tourer, but a great bike for a day rideout

All the bikes had good dashes and gear indicators built in which was nice.

In summary, the only bike I couldn't get my knee down on was the intruder, all the Dash's were nice and out of them all I'd have the 1250 by miles.

Thank you for watching, this now has been brought to you by the letters D and X and the number 12

I've often thought about taking out a demo bike - been close to it, even stood in the queue for an hour only to be told the person in front of me would be the last one :(
Have even been leader in taking folk out on demos, but never quite plucked up enough to actually do it myself - maybe I'm sacred I might like what I'm riding.

I'll test drive any car (almost to my cost once!), but daren't take out a demo bike in fear of dropping it!

Nice write up and photo's though.

I once demo'd a Harley and a Buell firebolt in Glasgow.
Ride the Harley round the city centre streets. What a head turner....but for all the wrong reasons in my book.
Not my cup of tea tbh but it was a laugh. Lotta grunt but Hardly Able Son.
Firebolt was brilliant though....managed to get out of town a bit and it took a while to get the 'power' grin off my face.
I was still on my bandit at the time so it didn't take much to impress me.
Still waiting for a shot on DBD's Panigale......hopefully soon

I would like to give a Ducati Diavel a go round some of the twisties here, it looks fun but the width of the rear tyre looks scary.

Can't bring myself to ride anything I can't afford. Maybe that's why i'm single as well.

Yeah, you should have been there, shame on you


I did that track day at Mallory Park a couple years ago on all the Buell bikes. That was fantastic.

Get youselves out on some bikes, don't worry about if you can afford the bike or not, infact, it's better if you can't, no temptation then.

As for binning it, the best advice I every received is simply 'Don't'

I took out a new vmax at the Bike show last year and there was one of those Diavels. Not sure if it's my cup of tea but I'd have a go to find out.

The vmax was a cracker though, just like my dream woman, plenty of curves and power, and I needed to wrestle with it to get it to do whatvI wanted. In the end I was tired, exhausted and happy

Nice write up that makes everyone envious.