Thankyou to the old northern contingency

Thankyou to the old northern contingency

Yes i know, i've not been around for a while now and due to an impromptu organisation of a rideout today, didn't post up the details, but would like to say a huge thankyou to the guys for joining me on a fantastic run.
Steve, dave and matt brought some of the old northern cats together today along with some newer faces in my biking world and together, we rocked North Yorks.

Not many major things to report although one mates shock let go early on so he had to crawl home (safe and sound i hasten to add) and one almost got taken out by a lad we'd overtaken and was trying to keep up and couldn't so he totally missed a corner and almost took my mate out (luckily hid leathers are black so you didn't see the stain). the other highlights included being infiltrated by plod on a bike and during one part, was flagged down by a pillion coming the opposite way to warn us of plod ahead!! i don't know who laughed more, us or the plod biker.
The other amusing moment, which almost lost me my ride from laughing was a pheasant running across the road and steve running over it's tail as he passed. No feathers were lost but bloody hell, i was crippled with laughter!! lol
I've been back 5 hours, had a BBQ (for some of the gang), cleaned, tidied and had a couple of brandies and still haven't stopped grinning or buzzing yet. An awesome day indeed.

I have a good feeling about this summer and look forward to bringing the old gang back together as well as introducing some new. 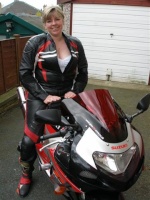 Glad you got out yesterday.

The weather was too wet to even think about getting the bike out. Unfortunately I did think about it several times and put myself in mood

Off out in a bit though

Glad to hear you all had a great time........I can almost see your chesire cat grin and hear your laugh from here Gail :whoop:

Haven't seen the Northern Posse up further North (across the border) for a while.........we don't use Euro's you know but even our currency isn't legal tender here

Hoping to do at least two Southern (to me) runs this year.......prossibly

Surf & Turf and Taste of Lincolnshire as and when they get finalised.
Will defo do Bishops Castle assuming it gets repeated next year just can't make this one.