Who runs what, just coming up on fitting a set to replace my 020s

Perhaps I will take a look at the touring ones, I will keep you posted, my current set of Bridgestones have perhaps 500 miles to go

Me too. Love 'em to bits. Like riding on rails.... that doesn't sound so good really does it?

What I mean is they feel planted!

A pair of Michelin 2CT's ordered this morning for mine, Can't wait to get the dog awful Bridgestone 021's off the bike ASAP

pirreli diablos front and rear on mine

got the bike last September and have done 2000 miles on it mainly over the wet and cold season and have chicken strips half a mile wide and the rear has squared off already so not to happy. But they do grip in all weather, not had any scarry moments. having not had a bike for many years i'm not used to modern tyres and bikes yet.
last bike was a CB900F2 10 years ago, which had teflon coated tyres and brakes compared to the

how low do you have to go to get to the tyres edge? 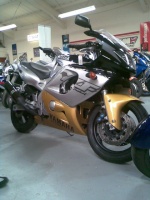 thunderstruck wrote:
how low do you have to go to get to the tyres edge?

Pretty low! Have managed to virtually wipe out any strips and have felt OK

This doing reasonable speeds. Yesterday I do think I found the edge of the tyre and just as well as I was doing less than 20 mph around a 150 deg off ramp. That was approaching scary.
I too am used to older technologies, the previous bike I had for 21 years, the back tyre was smaller than the

's front tyre and it was square. The bike was heavier and bigger at 650cc and turbo charged.

When I got my 'Cat it had some rapidly getting tired Dunlop's. To be fair, the tyre's probably had seen better day's and with me not being used to 'new' technology was a recipe for a very unhappy time. I had absolutely no confidence in them. When I was forced to change (thanks to a puncture), I went for the brand I had been using for nearly two decades. The 2CT's had recently come out, the dealer wasn't too sure about them - did some research for me and said they were getting good reviews.

The ride home was nerve racking to say the least. It was the first time I'd ridden a bike with a rounded tyre!! Took a day or two to get the hang of it and have never looked back. When the second pair went on, I was weary of the scrub in period again, but didn't have anywhere near the same problem. I'm now on my third and gave scant regard to scrubbing, mind you I had to take it easy as I found out the front pads were virtually down to metal

Tyre choice is a personal preference - maybe the style of tread is appealing (completely lost once you're on the bike!), or the way the ride feels. I find the Dual compound RoadPilot's work for me. As I've mentioned before, I get great mileage from them and they stick to the road like baby pooh to a blanket.

Pilot Road 2CT's here too.
I liked them so much I am now on my second set or it it my third :-)

Michelin Pilot Road 2 on the back for me....superb grip wet or dry have done about 2k in the past couple of months, alot of that has been up and down the motorway to work and still no sign of a flat spot!?!

However worth thinking about though is that i picked up a puncture on my previous tyre and not many places would repair punctures and the ones that did would only repair Michelins...don't know why though..

I picked up a screw in the rear tyre and had no problem getting it fixed but they did say it did depend on how big the hole is and where it is on the tyre. I know there are two trains of thought on repairing punctures, some say its not worth risking buy a new tyre while others say a repair is ok, at the end of the day it is your choice.

Must be a local thing then but out of the 5 I rang to see if they would repair only 2 would repair z rated tyres and they both said only if it was Michelin, didn't bother me too much though as I had a Michelin on the back already (although they still couldn't repair it as it was too close to the edge)

Only tried one place and they didnt seem to have a problem plugging a screw hole in my 021 rear, at £25 i'm not supprised.

Anyway new maxxis front ordered so just wait till it turns up, learn how to fit it and i'll report back, £50+postage.

none of them round here will repair

Was that a deliberate pun? In a 'tyre' forum??

Bike Treads in Swindon happly plugged a nearly new Conti RA rear for me a while back. It lasted another 5-6K without showing any sign of problems or losing pressure. I think it cost £15 including rebalancing on a loose wheel.

I've always plugged my own tyres if the repair is within the centre section, even on the front tyre too!
Never had an issue yet

bobh wrote:Bike Treads in Swindon happly plugged a nearly new Conti RA rear for me a while back. It lasted another 5-6K without showing any sign of problems or losing pressure. I think it cost £15 including rebalancing on a loose wheel.

They charged me £25, although cost aside they fitted me in at short/no notice without any drama's

Anyway new maxxis front ordered so just wait till it turns up, learn how to fit it and i'll report back,
£50+postage.

I am running Maxxis Supermax front & rear, they where on the bike when I bought here & are only 400ish miles old. They are very very sticky in the dry & when up to tempreature & are etremly comfidence boosting.
Different story in the wet, they seem a bit squirmy, also if you havnt let them warm up & it is wet then they are not too good, I have had the back step out more than once.
Definitly a dry tyre & I will probably be swapping them for some more tour biased tyres when they need replacing. That said I bet they are great on a dry track.

I've had the Michelin Pilot power 2CT's on for 400 miles now, Initially I wasn't over impressed but have spent a fair bit of time on setting up my bikes suspension over the last few days & the difference is night & day

Big thumbs up from me for the 2CT's especially in the wet/damp conditions, My chicken strips have never been so small before

Now we are enetring the world of scocery. I would have a clue what im doing, or where to start (remember I am coming from Bandit country here).

Come on then - hands up all those on here who do that!!!!

I've tinkered with my suspenders suspention to get the bike how I like it. Not saying I'm a guru or anything.

what are chicken strips btw?

Wild-Kat-Wolf wrote:Well there's obviously no hope for me.... as I'm on BT021's .....though my chickens strips aren't too bad

there's no way i'd have the BT021s fi ... there's just too much tyre hitting the road for me with those

... you wanna get some dunlops

... my chicken strips are getting there but doubt i'll get them off as although the bike was personally set up for me that's only because half of it has been surgically removed to make it suitable for a dwarf ... don't think ezzy would take kindly to any more tinkering with her undercarriage

.... but maybe thats where i've been going wrong mayhap i'll ask a man to tinker