New member (TO BE)

New member (TO BE)

Just a quick message on behalf of Robcat and myself to introduce our shocking news that we received on 10th October when I went for blood test results and was informed that I am actually carrying a little one and the first picture showed that I was over 10 weeks pregnant (a total surprise and shock to me and Rob).

[img][You must be registered and logged in to see this image.][/img]

[img][You must be registered and logged in to see this image.][/img]

This means Rob will be one up for the Wee Mac but I am determined to drive up for the weekend with my bump.

Belated congrats from me too. :whoop:

You should post the photos in the "Members Pix" thread, just to make everyone look proper old, not just us pensioners.

i love em to bits 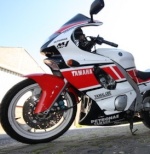 Great being blessed with kids, life must be pretty uneventful without them lol

Great being blessed with kids, life must be pretty uneventful without them lol

Yes you could do what you wanted to do, when you wanted to. Think of the extra cash you'd have for that new bike and kit to go with it....

Yep, love them to bits and life would be boring nosurprises to cope with.

Tell me about it! One's 20 next week and had money towards a horse and the 12 year old wants an iPod touch.

I'll keep doing the over time...

Yes i'd already got my plans of having another bike in 2013.

Keep the R1 and have a Versys aswell for all the touring around and we did have plans on a trip to Italy in 2013 aswell, on the bikes, but that plan just vanished, totaly went.

Only remember about it now because i have a page saved with a Versys review and another, on deals with them.

PS: Rob you'r not gonna believe what i bought a few months ago?

PPS: You can have shotty next time we meet up....