Ok, so being unemployed has its advantages when its such a lovely day as today, given that due to our week long Indian summer we will probably be under 8ft of snow from November till March, I took the opportunity to go for a mid afternoon ride out, few hours out in the sun trying to master cornering a bit better then home for a few ales out tonight with my mates.

But ALAS this thus not be the case..........................................riding along after filling up I come to a very congested road cars and busses parked on both side of the road in a residential street, so I get into a safe positions and let 11 or 12 cars through as there's nowt behind me, After the last car passes there is quite a big gap between them and the next oncoming car so feel its fine for me to move through as I do said next car speeds up! the bloke behind the wheel swearing loudly and waving his hands then and this is the best bit actually turns into my path and drives at me!! stopping some few feet short to tell me i am a wanker of something, if he had maybe looked where he was going he would have seen there was more than enough space for him and me to pass if needed.
I rode off a little put out, i try to be a good road user and then nearly get wiped out because of it, so I think right lets get out of town into the countryside, all is well until i come up to a lovely flowing B road, merrily wafting along enjoying the sun and the corners I see something in the road, I get closer and they are rather large chunks of rock which have fallen off a trailer/tractor in the distance so am dodging these as best i can until a rather sharp turn come up, where by coming out the apex I can either run into the other lane and get hit by the oncoming car or hit the rather large piece of rock in the road, I hit the rock though thankfully stayed on the bike and the bike suffered no damage at at.
Now mightly pissed I try to find the farmer and his tractor but he has disappeared into the fields and I have no idea which one, so while muttering in my helmet decide to call it a day as I think I was maybe being told something

then on the way home I nearly get taken out by some complete monkey not observing the stop signs and road markings for a priority way pass under a bridge, nearly ended up in the hedges after swerving for that, best bit was the guy got out of his car and started shouting at me for him not stopping when he should have!

Safe riding to any who are out this next few days! 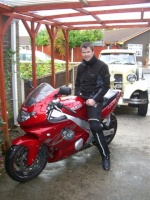 unclentch was my first reaction

I had a lexus drive try to cut me up on roundabout today, i shook my head in dismay at his inept driving and then on the next piece of road,single lane (60mph) he decided to over take me and then proceed to slam on his brakes at random intervals to shit me up...(escuse the french).

You have to accept their are moron car drivers out there.

I only thought it was drivers of large Beemers that did that stuff, lexus drivers will now by on my look out list!

Sad to say it fella . . . but if it has four wheels and a cage around the occu'pants' (whether they're a bike rider in another roll or not) add them all to your list and treat them with suspicion.

this is very true, Makes me wonder what they tech you when you learn to drive these days as having done both now I certainly learn't a lot more when I was learning to ride.
And the EU is currently going on about making all these changes to make biking safer, yet they don't seem to believe cars and their drivers play a key role in bike safety to

cage,s have loverly door mirror,s which come off with just 1 swipe ive done 2 as it is
1 who throw his fag end out the window which bounced of my chest so at the round about i proceded to remove his door mirror
for him
next was a amber valley taxi who for some reason decided to join the round about with me on it so had to go right round againwith me by his side were i then removed well nearly as it hung by the wire,s his door mirror

I take it your ride was anything but this ..

cards wrote:cage,s have loverly door mirror,s which come off with just 1 swipe ive done 2 as it is
1 who throw his fag end out the window which bounced of my chest so at the round about i proceded to remove his door mirror
for him
next was a amber valley taxi who for some reason decided to join the round about with me on it so had to go right round againwith me by his side were i then removed well nearly as it hung by the wire,s his door mirror

Don't think I'd ever be doing that......
- one more biker hater.
- they may very well note your numberplate and report you for criminal damage.
- they might just follow you and take you out at the traffic lights.

All you need is a quick release helmet and a good swinging arm, through drivers window and shout %$^^£$%
sorted

I take it your ride was anything but this ..

Lets face it Steve if it was a real Duc rider in that vid, would have cocked up on the first hazard

Oh and second what Tel says, unfortunately 4 wheels always have the upper hand on the roads... you shouldn't play with fire otherwise one day you will get a burn.

If only I had all the signs everywhere!

Though I do like in the vid how the fail to mention the obviously greasy surface of the road and that sure only a bike like that, you would throttle on out a corner and the back you be in the hedge before you could think about doing anything to save it! I know bikers should be seeing all this other stuff but greasy roads are a menace, if only local councils could sort those out to......................

I have a history of collecting door mirrors , mainly for idiots who cant be bothered to use them when overtaking , 2 audis 1 passat and a bmw so far, i thought that was what the carbon knuckle things on the back of the gloves were for!!!!!!!!!

haha I like that, I knew there was a use for all this armored gear we wear.
Have now managed a full 2 days riding with trying to be killed by anyone or anything, just freezing my ass off